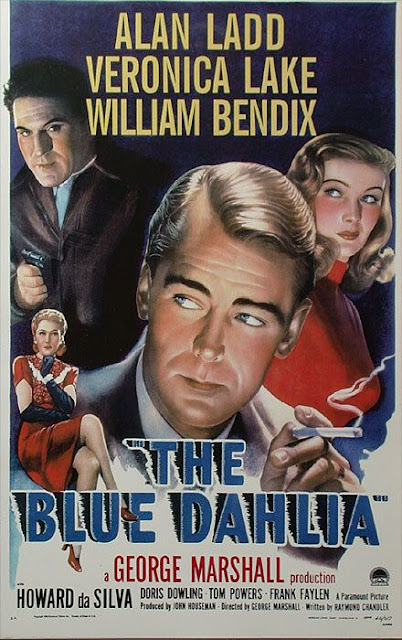 Like the same year's Best Picture winner The Best Years of Our Lives, the 1946 George Marshall directorial effort The Blue Dahlia deals explicitly with the experiences of soldiers coming home to World War II and trying to adjust a world that's eerily familiar yet oh so strange. That's what's happening to Johnny Morrison (Alan Ladd) and his two friends and fellow soldiers Buzz Wanchek (William Bendix) and George Copeland (Hugh Beaumont) as they attempt to return to reality after enduring all kinds of horrors in World War II, one of which left Buzz with a plate in his head. It isn't long before Johnny's life is tossed into chaos when Johnny's wife is murdered shortly after the two have an argument.


Now Johnny, the primary suspect for the slaying, is on the run from the cops and is trying his best to figure out who the killer actually is. A murder mystery with film noir trappings, The Blue Dahlia is one of the numerous movies I've been assigned to watch for the very first time as part of my current Film Noir in Historical Context course. It's been a joy to catch up on so many movies that were flat-out crowdpleasers back in the day and helped define the film noir genre that was so popular back in the 1940s. That having been said, The Blue Dahlia is probably one of the weaker motion pictures I've watched for the class so far, though it's still a solidly well-made movie in its own right and not without its virtues.

Put simply, The Blue Dahlia feels like it lacks an extra jolt of personality in its characters and stories. The most distinctive individual in the story is supporting player Buzz while both the cops and criminals Johnny faces off against over the course of the story aren't all that memorably entertaining. The murder mystery itself is more successful as The Blue Dahlia finds plenty of twists and turns for Johnny to encounter as he navigates the scenario of trying to clear his name while running on the lam. However, the eventual resolution of this mystery is a bit on the underwhelming side as an abrupt introduction of our killer as well as an extended sequence centered on Buzz's abilities to use a firearm are clumsy in execution.

That having been said, there is still plenty I found to be admirable in The Blue Dahlia, especially in regards to the character of Buzz. This characters psychological condition (which is basically an undiagnosed form of PTSD) that has him despising loud noises that mess with his head is depicted through intense sound and voice-over work meant to communicate his fractured metal state. These techniques stand out as far more trippy details than one would normally find in an American movie from this era and they stand out as both a creative way to get into the mind of this war-weary character as well as one of the most distinctive elements of the entire motion picture.

The performances are uniformly solid, including Alan Ladd in a lead performance that, like much of the rest of the movie, could use some extra shades of idiosyncratic personality but still maintains one's attention easily. Aside from William Bendix's tortured turn as Buzz, the best performance in the cast likely comes from Veronica Lake as the character Joyce, a figure Johnny runs into in his time on the run from the authorities. Lake has an incredibly charming demeanor and style of acting, particularly in her first scene where her character meets Johnny, that makes the character an enjoyable presence in an otherwise gloomy movie. That kind of morose tone is nothing new for crime movies of the 1940s, but it's one of many ways the competent but derivative The Blue Dahlia feels like it doesn't stand out enough from similar movies released in this same era.
Posted by Douglas Laman (NerdInTheBasement) at 12:59 PM