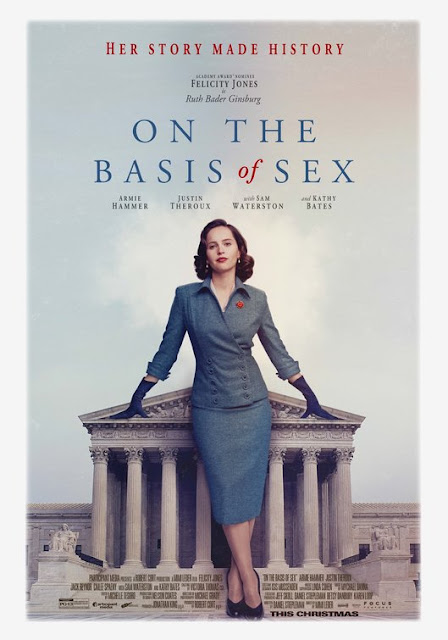 Ruth Bader Ginsburg gets her very own biopic with the Mimi Leder directed motion picture On the Basis of Sex. After the first half-hour or so chronicles Ginsburg's formative years at a Harvard law school, we flash-forward to 1970 New York where the majority of our story takes place in. Ginsburg, now a professor, is hungry for the chance to be a lawyer in a case that could make a difference in the world, particularly on the front of gender-discrimination, a cause she's immensely passionate about. She gets her chance in the form of a tax case that says an unmarried man cannot be given a tax deduction for nursing care. If she breaks through with this case, she could set a precedent that helps make a giant leap forward for gender equality in American society.

In a number of respects, On the Basis of Sex is a bog-standard biopic drama. Like a lot of these type of movies, its story suffers from trying to cram in too much into one feature film, with On the Basis of Sex specifically never quite finding an organic way to shift gears from extended sequences set in the 1950s to its primary storyline set in the 1970s. Meanwhile, the dialogue, penned by screenwriter Daniel Stiepelman, has a tendency to drift over into cornball territory, particularly whenever characters begin speaking in a decidedly non-human like manner that has them just flat-out stating their motivation or their core beliefs like they're introducing themselves on a game show.

Stiepelman's ultra-conventional screenwriting tendencies bring about the weakest parts of On the Basis of Sex and that includes a subplot with Ginsburg's daughter, Jane (Cailee Spaeny), that goes in a predictable direction with equally predictable execution. On the other hand, while Stiepelman's writing is rarely exceptional, it's also rarely bad. Much of his story structure and dialogue is paint-by-numbers but at least the paint is of a reasonably pleasing color. The actual accomplishments of Ruth Bader Ginsburg are so inherently inspirational that it would take a screenwriter like Uwe Boll or Cary Solomon to write a movie about her life that didn't manage to be at least somewhat moving.

Though nowhere near as trailblazing as its real-world protagonist, On the Basis of Sex does make Ginsburg a figure one can get wrapped up in as she does all that she can to make an impact in 1970's America. Probably the best part of the script is how it does offer plenty of chances for Ginsburg's perspective to be put into the spotlight, we get to see the human side of an individual who would end up being a towering figure in American history. Just by having the script spend so much time focusing on Ginsburg and how she endures in the face of countless obstacles, we get the chance to feel her frustrations just as vividly as we feel her euphoria over her various achievements.

Playing the role of Ruth Bader Ginsburg is Felicity Jones, a smart bit of casting considering Jones is a performer who's able to convey both humanity and a sense of inspirational leadership that makes her someone you'd want to follow into battle. That quality of hers served her well in her lead role in Rogue One just as it makes her a great fit for the part of RBG in On the Basis of Sex. As Ginsburg, Jones is doing consistently strong work, especially in the characters galvanizing climactic courtroom speech, and she captures that great quality in the best lead performances in biopic dramas in how she reminds one of the real-life figure she's portraying without constantly coming off as just doing a shallow impression of that figure.

Playing opposite her is Armie Hammer as Ginsburg's husband, Martin, a role that calls for Hammer to be the epitome of charming kindness. Though Hammer's excelled best as a performer in the past with roles in The Social Network and Sorry to Bother You that had him playing varying degrees of overt sliminess, he does fine work here working under the direction of Mimi Leder. Leder lends an assured hand behind the camera, particularly in the performances she gets out of the actors, in what's her first feature film directorial gig in nearly two decades, hopefully, we see her directing more movies in the near future! Leder's solid directing, alongside the all-around strong performances of the cast, make On the Basis of Sex a movie I kept wishing would have the guts to be bolder in story structure and dialogue but also a movie I kept finding quite agreeable and frequently moving. It helps too that the whole thing closes out on a great song by Kesha, a surprisingly and smartly understated tune entitled Here Comes the Change that sends one out of the theater especially moved emotionally.