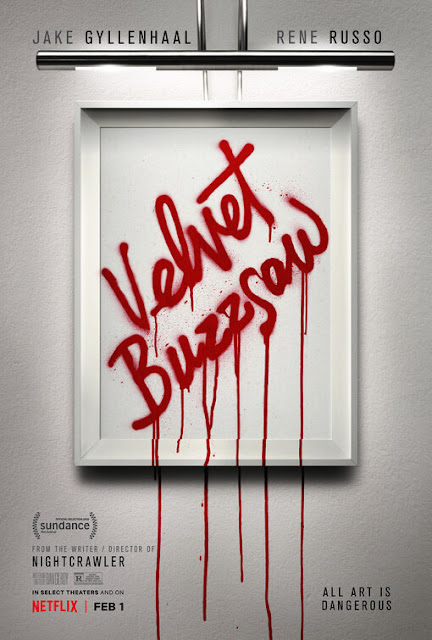 The main characters of Velvet Buzzsaw are just not good people. With the exception of supporting players Damrish (Daveed Diggs) and Coco (Natalie Dyer), most of the people we meet here are utterly rotten, acting selfishly for personal gain in their quest to get ahead in the Los Angeles art scene. Most prominent among these characters are art critic Mort Vandewalt (Jake Gyllenhaal) and Josephina (Zawe Ashton), the latter of whom gets her big break after breaking into a deceased painter's apartments and stealing some paintings that the painter wished to have destroyed. Josephina decides to go in a different direction and proceeds to champion them as an exhibit that immediately becomes massively successful.


This was a bad move on Josephina's part for numerous reasons but it's especially a poor idea given that the paintings are haunted and are starting to kill people (don't you hate when that happens?) Because the vast majority of the cast of Velvet Buzzsaw is full of despicable caricatures, they're the perfect kind of fodder for paintings to kill off in gruesome ways. If George A. Romero or some other horror auteur got their hands on the Night at the Museum franchise, the big death scenes in Velvet Buzzsaw would be akin to the kind of horror movie they'd end up making as pieces of art begin to slaughter the people who hold no regard for people or the art they make.

Though going in the direction of full-on horror is a departure from director Dan Gilroy's prior work as a filmmaker, I found it interesting that Velvet Buzzsaw does cement a recurring theme throughout his work, one that Gilroy himself has said is an intentional thematic motif as a filmmaker. Specifically, his trio of directorial efforts (which also include the excellent Nightcrawler and the average Roman J. Israel Esq.) are all about human beings who exhibit selfish behavior and the long-term ripple effects on themselves and society that such behavior causes. In the world of Dan Gilroy movies, looking out just for yourself has definitive short-term gains, but much like a classic film noir, these stories typically end in tragedy, with only Roman J. Isreal Esq. ending its story by offering a glimmer of hope to the viewer.

Contemplating how Gilroy's directorial efforts probe the long-term effects of selfish behavior is a fun mental exercise but less fun are the stretches of Velvet Buzzsaw that rely too heavily on its characters engaging in art culture intrigue. The players in Velvet Buzzsaw work well as victims for the paintings to slice and dice or as vehicles for deliciously hammy performances from Jake Gyllenhaal and Toni Collette, but I just couldn't get interested in them whenever they're trading dialogue about who is working for what museum or what paintings will get shown at what exhibits. Too much of the story, especially in the middle act, is focused on these kinds of plot elements and it's just not all that entertaining to watch.

Gilroy's script also has a recurring problem with dialogue that clumsily conveys key character dynamics, with a perfect early example being a dialogue exchange between head art honcho Rhodora (Rene Russo) and Josephina wherein the former character tells the latter individual about how much she's helped her get to where she is today despite there being no on-screen indication of this specific dynamic prior to that scene. Other key character-based elements, like the fragmenting relationship between Mort and Josephina, get handled in a similarly clumsy fashion that relies too heavily on awkward dialogue instead of visual-based storytelling.

On the other hand, Gilroy's work as a director here is usually quite solid, particularly in some clever pieces of camerawork, namely an extended scene where the camera is positioned from the perspective of a painting, and in his work with the actors. Jake Gyllenhaal, reuniting with Gilroy after their incredible work together in Nightcrawler, is a lot of fun in his constantly over-the-top performance that captures just how quirky critics of the arts (hey, that's me!) can be in real life! The supporting cast is chock full of talented actors like Rene Russo and Toni Collette reveling in the curt & darkly humorous dialogue they've been given to deliver. It's hard not to enjoy a movie like Velvet Buzzsaw with these kinds of delightful performances but I did also leave Velvet Buzzsaw wishing it had come together as a whole better. One could say that, if this movie were a painting, the individual colors here are beautiful but the form they merge together to create leaves something to be desired.
Posted by Douglas Laman (NerdInTheBasement) at 1:26 PM