In Laman's Terms: Disney And Its Pursuit of a Best Picture Winner 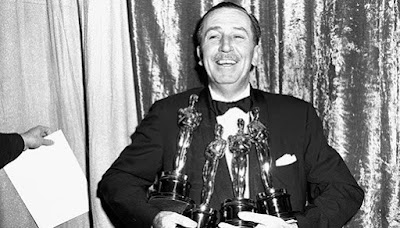 In the 1950s and 1960s, musicals were a surefire bet for scoring Best Picture nominations and even outright wins in the case of features like An American In Paris or Oliver! It shouldn't be any surprise then that beloved live-action musical Mary Poppins managed to score a Best Picture nod, the first time ever Disney managed to have a presence in the Best Picture category. Losing to My Fair Lady that year, it was a fleeting moment of Oscar recognition for a studio that, to this day, is still the only one of the major American movie studios to not have won a Best Picture Oscar. Poor poor Disney, let me play a mournful song for you.

Anywho, Disney's never managed to actually take home a Best Picture Oscar statue but they have had plenty of brushes with the category over the years. Their second Best Picture nominee wouldn't arrive until 25 years after Mary Poppins, with this film being a great departure from the whimsical fantasy adventures of that British nanny. Forming the Touchstone Pictures division in 1984 allowed Disney to release more adult fare that wouldn't be able to go out under the Disney name and one of these films turned out to be eventual Best Picture nominee Dead Poet's Society. Though Best Picture victory once again eluded Disney, they would never again have such a long gap between Best Picture nominees. In fact, a movie from Disney's animation division managed to score their next Best Picture nominee just two years later.

That's right, the tale as old as time itself, Beauty and the Beast, became Disney's third ever Best Picture nominee and, even more importantly, the first ever animated movie to score a Best Picture nomination. Though it, unfortunately, did not normalize the idea of animated movies being nominated for Best Picture, it did manage to reinforce how Disney was no longer sitting on the sidelines of Oscar season. This was especially apparent after Disney spent $60 million to buy indie movie studio Miramax in 1993. However, I will not be counting any of the Best Picture nominees and winners of the Harvey Weinstein & Bob Weinstein run studio as Disney Best Picture contenders in this piece because of Miramax being run as enough of an independent creation under Disney ownership that it was able to take its entire studio library with it once it departed the Mouse House.

Though Miramax gave the Disney company association (however tenuous) with some Best Picture contenders, the studios own homegrown movie divisions were still putting itself into the award season race, including newbie studio Hollywood Pictures (which, like, Touchstone was made to create adult-skewing movies) that scored Best Picture nominees with 1994's Quiz Show and 1999's The Sixth Sense, with the latter film competing for Best Picture against Touchstone title The Insider. Prior to 1990, Disney had only two Best Picture nominees, whereas the last ten years alone had delivered four different Best Picture nominees for the studio.

Despite such noteworthy growth, Disney's presence in the Best Picture category would begin to shrink considerably in the first decade of the 21st century. Much of this comes down to the studios two adult movie divisions slowing down their output considerably as Hollywood Pictures basically ceased to exist after September 2000*. Meanwhile, Touchstone Pictures, aside from releasing a pair of directorial efforts from Wes Anderson and a trio of films from M. Night Shyamalan, primarily turned its attention to comedy features like Bringing Down the House and The Hot Chick that were never going to score major Oscar consideration. Disney went almost the entire 2000's without a single Best Picture nomination until Up came along and ended their decade-long cold streak.

Up was only the second animated movie in history to score a Best Picture nod and the following years Toy Story 3 would bring the number of animated Best Picture nominees up to three. By this point, Touchstone Pictures and Hollywood Pictures were both defunct in terms of producing new movies, but Disney had found a new studio to supply them with adult-skewing movies that could score Oscar glory. DreamWorks had partnered up with Disney to produce 30 movies over the span of six years, some of which would be directed by one of the studios founders, Steven Spielberg, DreamWorks managed to release five movies in the first year of the studios partnership with Disney (2011) but the box office failure of Cowboys & Aliens sent the studio scaling back to doing only two movies a year for the rest of their time with Disney.

The merging of forces between Disney and DreamWorks didn't result in an avalanche of new content being created but it did mean Disney got to have four more Best Picture nominees (The Help, War Horse, Lincoln and Bridge of Spies) it could add to its permanent library of titles. Between these DreamWorks titles as well as Black Panther scoring a Best Picture nod this past year, Disney has managed to have at least one Best Picture nominee in six of the last ten Academy Award ceremonies. It's doubtful any of Disney's in-house titles for 2019 result in a Best Picture nod (maybe Artemis Fowl will surprise us all) but it is likely Disney's purchase of movies studios 20th Century Fox and Fox Searchlight will result in a pair of studios that can supply Disney with plenty of award season contenders. Interestingly, this purchase also means Disney can add plenty of Best Picture winners ranging from The Sound of Music to 12 Years a Slave to its library of titles. If that news still leaves the heads of Disney feeling discouraged, well, allow me to once again play a song on my violen for them...

* = Hollywood Pictures would have  a peculiar resurgence form March 2006 to April 2007 for the sole function of releasing a trio of low-budget horror movies.
Posted by Douglas Laman (NerdInTheBasement) at 11:41 AM