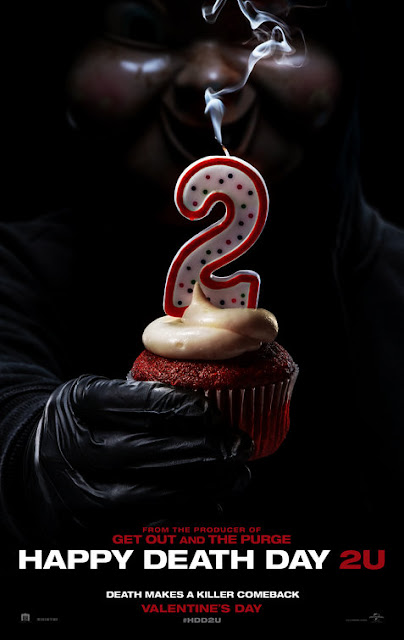 Slasher movie sequels are common. Slasher movie sequels like Happy Death Day 2U?  Less so. Instead of just taking the killer in the Babyface mask to Manhattan or to Hell, Happy Death Day 2U decides to just lean into all the high-concept science-fiction possibilities you could think of coming out of the first movie's premise. Writer/director Christopher Landon is just letting his imagination run rampant in expanding on the world of Happy Death Day and though the resulting motion picture is one of those movies that may work better as individual sequences than as a whole feature, it's also really fun to watch and shows way more creativity than your average slasher movie sequel.


Plus, Happy Death Day 2U is the rare sequel to actually spend time on a backstory for unexplained aspects of its predecessor and not end up feeling like its providing backstory at the expense of the quality of the original film. That backstory, which in this case relates to explaining just how Tree (Jessica Rothe) got stuck repeating the same day over and over again in the original movie, emerges as Tree learns that Ryan (Phi Vu) is stuck in a time loop and hunted by a killer in a baby mask just like she was in the first movie. In an attempt to help him out, she learns that Ryan and two of his classmates have made a machine that inadvertently sent her and now Ryan into a repeated time loop.

From there, all kinds of time travel shenanigans ensue that eventually involves Tree traveling to an alternate dimension. Things begin to resemble a Crisis on Infinite Earth's issue more than, say, Scream, but that's clearly the point. The first Happy Death Day already function more as a character-driven dark comedy than as a straightforward slasher movie and so the sequel, like so many sequels before it, takes things to the next level by only occasionally dipping its toes into the realm of horror storytelling. This means the story tends to be all over the place to an occasionally detrimental degree, with Ryan's storyline, for instance, just abruptly ending once the alternate dimension comes into play.

Given how much rampant creativity runs throughout so much of the movie, the status quo in the
alternate dimension too often feels like it should be more zany and different than the dimension Tree hails from. Attempts to wring pathos out of a personal struggle Tree finds herself in this alternate dimension, though conceptually a solid extension of Tree's predicament related to her deceased mother in the first movie, ring a touch hollow in a movie this kooky. It's like if the Time & Punishment Treehouse of Horror segment kept pausing the humorous story to also make time for an emotional arc for Homer Simpson, pathos, at least in the way it's executed here, just doesn't fit in a time travel story this wacky.

But even an emotional subplot that doesn't work in execution still shows admirable ambition from writer Christopher Landon whose script is predominately almost as enjoyable as the first movie. It's hard to not find plenty of enjoyment in a slasher movie sequel that's so staunchly defiant on being tied into one genre that it briefly turns into a slapstick-laden heist movie in its third act. Though it's traveling across more genres than its predecessor, the delightfully macabre dark humor of the first movie has been thankfully maintained and then some, particularly in an extended montage of Tree killing herself that finds clever uses for toxic chemicals, a bathtub and skydiving.

Perhaps most brilliant of all in the scripts handling of the alternate dimension angle in the story is an eventual subplot revolving around Tree and a kinder version of the first movie's killer, Lori (Ruby Modine). Plenty of horror films have tried to wring sympathy out of their slasher movie characters (remember Texas Chainsaw 3D?), but going this particular route in watching a slasher movie survivor run into a different version of their murderer is especially inspired and possibly the best use of the alternate dimension angle in the entire movie. Also getting put to good use here is Jessica Rothe who once again delivers a hysterical performance as Tree and her depiction of her characters ongoing frustration with all the time travel nonsense she has to put up with had me cackling. She delivers a way better performance than you usually see in slasher movie sequels, just one of many ways Happy Death Day 2U rises above similar movies of its ilk.