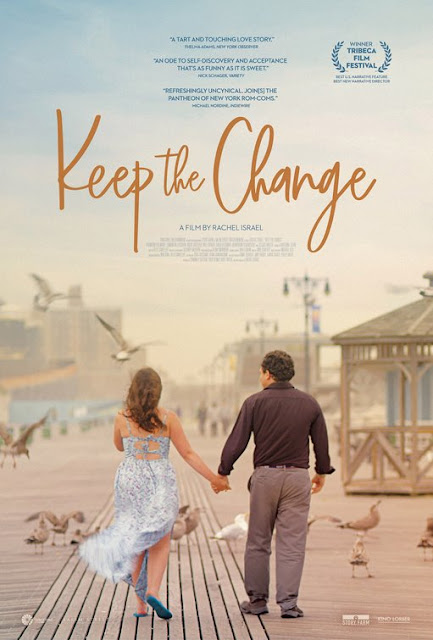 Right from the get-go, Keep the Change deviates from standard pop culture approaches to handling people on the Autism spectrum by putting its Autistic characters front and center in its narrative. Our protagonist is David (Brandon Polansky), a man who's forced to attend a support group for individuals on the Autism spectrum as part of a court sentencing. David begrudgingly attends these weekly meetings despite having zero interest in the group though his attitude towards the proceedings change once he begins to hit it off with another participant in the support group, Sarah (Samantha Elisofon). Though at first irritated by her, David and Sarah begin to develop an unexpected romantic bond that begins to challenge David's life for the better, particularly in how it challenges his previously held desire to not be seen as someone on the Autism spectrum.

In the eyes of David, being Autistic is something to run away from, not embrace, an attitude instilled in him by his parents, one of whom is played by Lucille Bluth herself Jessica Walters. This subtly communicated sense of self-loathing is one of numerous way the script by Rachel Israel (she also directs this project) explores the complex perspectives of its two lead characters in a fascinating manner. The scripts recognition that David and Sarah are people who don't just fit into a tidy box in terms of personality allows them to feel like fleshed-out people one can get invested in, which makes their eventual romance extra emotionally potent.

Of course, Israel's screenplay isn't a perfect creation, with the two biggest stumbles being a subplot regarding a love interest rival for David that ends up going nowhere and an awkward handling of Sarah's polyamorous romantic interests that similarly just sputters out. Predominately though, this is a smartly-written script with a particularly noteworthy talent for rising above typical pop culture stereotypes regarding individuals on the Autism spectrum and making David and Sarah interesting stand-alone human beings. Just watching them going out on dates to the beach or walking around Central Park is a treat to watch thanks to how much of a splendid job Rachel Israel has done developing these two characters.

These aforementioned date sequences allow for another standout element of Israel's writing to flourish. The screenplay contains numerous humorously written dialogue exchanges that the two lead performers, Brandon Polansky and Samantha Elisofon, execute with a fine sense of comedic timing. Polansky's overall performance does a great job of taking the well-worn detached intellectual archetype seen in so many romantic-comedies set in New York City (the shadow of Woody Allen looms large over this specific subgenre) and adding a fresh new coat of personality to it. Playing of Polansky for much of the movie is Samantha Elisofon in an outstanding performance that lends a lot of riveting persistent conviction to this character. Sarah is the kind of person who wouldn't back down from an approaching tidal wave and the way Elisofon realizes that in her thoroughly confident performance is exceptional.

In contrast to the typical procedure for hiring performers to play characters on the Autism spectrum in American pop culture, both Polansky and Elisofon are actually actors on the Autism spectrum, as are the other performers portraying other members of their support group. After years of watching movies where Autistic characters exhibit behavior that feels, at best, like it comes from stereotypes rather than reality, it was fascinating to watch a movie like Keep the Change where both the lead characters and background characters exhibited bits of behavior, both subtle and overt, that I recognized in myself. Even better, the numerous characters on the Autism spectrum in Keep the Change also exhibited behaviors I recognized as different both from myself and other Autistic characters in the storyline.

You can watch Keep the Change on Kanopy now.
Posted by Douglas Laman (NerdInTheBasement) at 2:26 PM