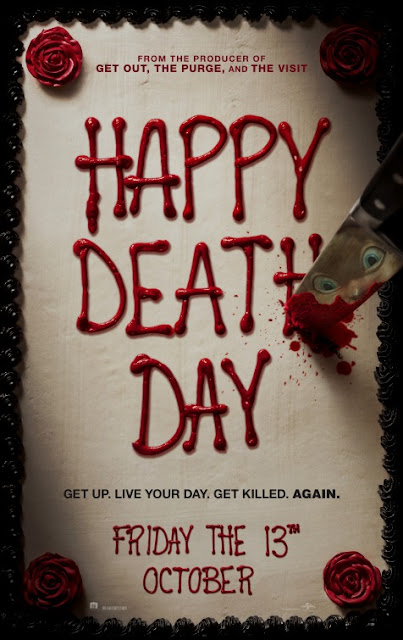 Though so many popular horror films (namely the Evil Dead movies) fall under the categorization of horror comedies, they haven't been much of a moneymaker at the domestic box office. That might be because too many modern-day examples of the trend are helmed by filmmakers who don't have the sense of tonal balance as, say, Sam Raimi and Peter Jackson and end up going too far in embracing the comedy side of that genre pairing, which can leave the horror feeling underwhelming. Then again, functioning more of a wacky dark comedy than as a straight-up horror film can have its benefits, just ask Happy Death Day.


Normally declaring that Happy Death Day doesn't really function as a horror movie would be an insult for a slasher movie, but I mean that observation as praise for how well Happy Death Day goes about executing its high-concept mixture of Looney Tunes, Edge of Tomorrow and Scream. The main character of this kooky exercise is college student Tree (Jessica Rothe), who, like 90% of the cast of characters, just isn't all that good of a person. She's also just been murdered, which is somehow not even the most noteworthy thing that's happened to her recently. No, that distinction belongs to the fact that she's now reliving the same day over and over again, a freaky occurrence that she decides to use to figure out who exactly her killer is.

Thank God writer Scott Lobdell decides to eschew wasting any time on explaining how and why Tree is actually going through a Groundhog Day experience, that would inevitably stop the plot dead in its tracks for a convoluted explanation that just isn't needed. What's important in the movie isn't why Tree is suddenly stuck in a time loop but rather what she plans to do with this newfound ability to go through the same day endlessly.  That's where all the numerous fun elements of the film, especially once Tree decides to embrace being basically immortal and just die as many times as possible in order to find out the truth behind her killer.

Along the way, Lobdell's script subtly has one get to know Tree and understand her plight. I love it when a movie pulls the rug out from under the viewer to make them realize that they've actually grown to care about the characters in what was supposed to be a silly movie (the best movies starring the Muppets are really good at this) and Happy Death Day does a fine job making one get involved in what motivates Tree's selfish nature without you even realizing it! All that time spent watching Tree get killed and getting killed off in a frequently ridiculous fashion works as fun entertainment while it's happening but it also manages to really pay off by the end by helping one get fully engaged into Tree's whole personal woes.

Plus, all those sequences depicting Tree having to relive the same day over and over again are just fun to watch in their own right. Director Christopher Landon has some really clever pieces of unnerving visual filmmaking in here (namely the introductory shot of the killer that occurs in the background) and it's great that the script, direction, and acting aren't afraid to go delightfully grandiose when the situation calls for it. Does the killer just nonchalantly drop a match onto a trail of gasoline? No, the killer drop a match onto a trail of gasoline with as much dramatic pizzaz as possible, complete with an extended pause to let it sink into Tree and the audience just what's going to happen next. That's such a fun moment of over-the-top panache and there's a whole bunch of similarly delightful moments like that scattered throughout Happy Death Day.

Of course, not everything in Lobdell's screenplay works as well as its best moments of grandiose theatricality. Most notably, a character who serves as a red herring for who the actual killer is functions a bit too obviously as a red herring since the character in question is so immensely divorced from Tree and her life. The intentionally on-the-nose dialogue has its fair share of clunky lines that fall flat in execution, though lead actor Jessica Rothe tries her best in delivering even the worst of these lines in her outstanding lead performance. If there's anything that really stands out in Happy Death Day, it's her work in the lead role, Jessica Rothe is an entertaining riot playing the PG-13 version of what a college student might be like in an episode of It's Always Sunny in Philadelphia. She absolutely kills it headlining this horror comedy that's much more creative and delightful than I was expecting.
Posted by Douglas Laman (NerdInTheBasement) at 7:15 PM