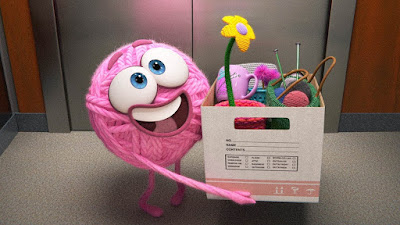 For well over thirty years now, PIXAR has been producing short films and the studio is doubling down on their dedication to that format of storytelling by starting up the PIXAR SparkShorts program. Basically, this institution will now have people from all over the studio coming to helm animated short films that occupy various mediums of animation. The possibilities for SparkShorts are endless, especially since it's been made clear that the directors for these shorts will be made up of a more diverse group of artists than the predominately white male filmmakers behind past PIXAR feature films and shorts. The first of these shorts debuted today and is entitled Purl. You can watch the Kristen Lester directorial effort below!


The larger ramifications of what Purl means for the future of PIXAR shorts will be discussed in a moment, but as its own stand-alone creation, Purl is truly delightful an exceptionally well-done creation. The central conceit of presenting a ball of yarn's workplace struggles as an extended allegory for women trying to adjust to a male-dominated workspace is inspired in its execution here. Writer/director Kristen Lester extends her inventive storytelling sensibilities to the animation that has the titular character (whose brought to life via a lively voice-over performance by Bret 'Brook' Parker) realized in a lower frame-rate than her CGI human counterparts. That's a bold design choice that, like Spider-Man: Into The Spider-Verse, shows what kind of quality visuals can be achieved when one thinks outside of the typical computer animation box. There's also a great voi

To top it all off, it's fun to hear a PIXAR project with a slightly more adult sensibility in its dialogue (mild pieces of profanity like "ass" and "prick" are dropped during the short), a choice that fits this particular story while the score by Pinar Toprak (who will be doing the score for Captain Marvel in just a month) is also well-done. Purl is a gem of a short in its own right, but in the context of the history of PIXAR animation, it's something truly exciting that bodes well for the future of short film storytelling at the studio. Purl follows in the footsteps of PIXAR's best short films like Sanjay's Super Team and Bao by using the medium of animation to communicate an extremely personal story in a distinctively stylized way. That's really all that these three otherwise very different short films have in common (well, besides being realized through computer-animation), but that shared trait, which seems to be a cornerstone of the SparkShorts program, is an exciting reminder that PIXAR shorts don't just have to be about inanimate objects falling in love, they can also be allegorical tales that come from both the heart and shine a spotlight on perspectives that have been woefully underseen in past PIXAR productions.

As a lifelong fan of PIXAR who has been nonetheless endlessly discouraged by the aforementioned lack of diversity in the studios output (both behind-the-scenes and on-the-screen), I'm oh so excited to see what else the PIXAR SparkShorts program has in store for the future, especially since one of these incoming shorts, Loop, is the rare piece of American media to have a protagonist who's a young girl on the Autism spectrum. If the exceptional creativity and quality on display in Purl is any indication of what kind of shorts SparkShorts will deliver in the future (apparently, these short films will primarily debut on the forthcoming Disney+ streaming service), well, count me in as excited for what comes next!
Posted by Douglas Laman (NerdInTheBasement) at 6:07 PM