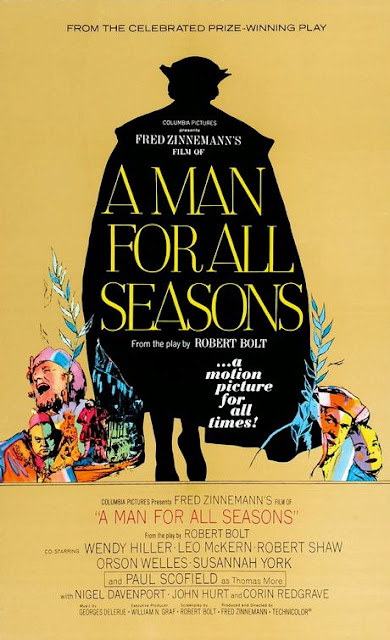 Anyone who's read my reviews for even the briefest period of time knows it's not unusual for me to have never heard of a beloved iconic movie. But I feel like my lack of knowledge on the existence of A Man For All Seasons is a tad more common than, say, being ignorant on the existence of Ang Lee's version of Sense & Sensibility until I saw a trailer for it on a DVD copy of A Man For All Seasons. Despite scoring a Best Picture Oscar back in the mid-1960s, I've rarely heard the film discussed or even mentioned at all in cinematic-based discourse. Perhaps this is because its victory at the Oscars that year didn't beat out a movie many consider to be widely superior or because it's widely considered to be an especially dismal Best Picture choice like The Broadway Melody, Crash or Green Book, two attributes that can spur up regular conversation.


Despite being one of the more forgotten Best Picture victors, A Man For All Seasons is actually a pretty good movie on its own merits that continues director Fred Zinnemann's exploration of one man standing against powerful societal forces that everybody else cowers from that served as the crux of his 1952 classic High Noon. A Man For All Seasons sets that exploration in the 1520's in the United Kingdom, while the one man who is dwarfed by forces nobody around him is willing to confront in this context is Sir Thomas More (Paul Scofield), whose steadfast adherence to religious practices comes into conflict with King Henry VIII's (Robert Shaw) desire to get a divorce. More refuses to approve of this divorce, incurring the wrath of Henry VIII and his accomplices in the process.

If you described just the basic outline of the plot of A Man For All Seasons to me, I'd likely be dubious of that movie turning out well. The prospect of a movie about a long-reigning religious figure becoming a martyr figure in the face of societal change sounds like the perfect outline for a God's Not Dead sequel, a cinematic vehicle for crusty old men to yell "Get off my lawn!" to "kids these days" who seek to change the status quo. Luckily, A Man For All Seasons goes in a far different direction than that as its story depicts from the get-go that the reason More's adversaries are actually adversaries is due to corruption and selfishness rather than being stand-in's for, say, the LGBTQA+ community.

A Man For All Seasons is more along the lines of High Noon rather than God's Not Dead in its story about one man against the world, though this one has a wider storytelling scope than fellow Fred Zinneman directing vehicle High Noon, which allows for the viewer to see other figures in More's life, particularly Richard Rich (John Hurt), succumb to personal destruction by way of indulging in self-satisfaction rather than looking at the bigger picture. Rich's storyline is especially potent in its woeful tone as one understands the motivation for why he'd betray More in the name of personal gain while still bemoaning how much he's changed for the worse over the course of the story.

That palpable sense of sorrow seeps in throughout the story and lends a compelling sense of despair to More's crusade to stand firm with his beliefs. We know there can't be happy ending in store for this guy as his life crumbles around him but we keep on being riveted by what's on-screen thanks to the characters quiet sense of rebellion that spits in the eye of authority simply by existing. That fascinating subdued depiction of rebellion is one of the best parts of Paul Scofield's lead performance which captures both the spirit of a religious authority figure in early scenes and a weary but determined fighter with equal levels of impressive believability.

Scofield is accompanied by a great supporting cast that includes Robert Shaw, whose vocal inflections as Henry VIII in an early conversation between his character and Sir Thomas More seem to be a precursor to the wonderfully unique vocal choices made by Eddie Redmayne in his Jupiter Ascending villain. All these actors are adorned in period-era costumes that look so fantastic that, when combined with all the gorgeously realized sets they wander in, A Man For All Seasons would have likely functioned just fine as a visual exercise even if the script was trash. Luckily, it's also got a strong screenplay that ensures the film ends up being much better than its modern-day muted reputation would suggest.
Posted by Douglas Laman (NerdInTheBasement) at 11:43 AM