The LEGO Movie 2 Works Well As An Allegory, Less So As A Comedy 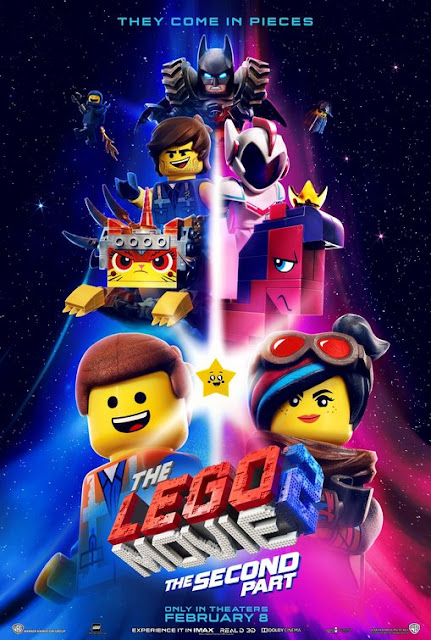 Considering how many modern-day American computer-animated movies primarily concentrate on how much dabbing, celebrity voice-overs and Minions going "BANANA!!" they can shove into their runtime, it feels like declaring that the biggest problem with The LEGO Movie 2: The Second Part is that it leans too heavily on its central allegory at the expense of humor should be a compliment disguised as a critique. Can something like The Emoji Movie even spell allegory, let alone execute one? But The LEGO Movie 2: The Second Part, though not devoid of entertainment, does feel like a movie so wrapped up in its central allegory that its attempts at humor feel more obligatory rather than actually entertaining.


At the end of the first LEGO Movie, it was revealed that not only would young boy Finn (Jadon Sand) get to play with his Dad's expansive LEGO collection, his younger sister would also get access to all the toys. The LEGO Movie 2 picks up five years after that ending and returns to the LEGO world of Bricksburg that Emmet (Chris Pratt) and pals call home. Only now, in response to the presence of a little sister, Bricksburg is a desolate Mad Max post-apocalyptic landscape, with all of its residents, save for Emmet, being darker and grittier versions of themselves. Though he doesn't really fit into this new version of Bricksburg, Emmet has to save Lucy (Elizabeth Banks) and his pals when they're kidnapped and taken to the Sistar System at the instructions of Queen Watevra Wa-Nabi (Tiffany Haddish).

It's a journey that has Emmet meeting the gritty warrior Rex Dangervest (also played by Chris Pratt) and encountering a number of physical manifestations of the feelings of both Finn and his sister. There's certainly some imagination on display in this story, particularly in the visual sensibilities of the animation that show some real creativity on the part of the animation team at Animal Logic (they also did the animation for the other theatrical LEGO movies). The Sistar System and its inhabitants are especially well-done from a design standpoint, particularly Queen Watevra Wa-Nabi, the way she constantly contorts her body into a new form to fit any given scenario is a visual treat.

Like its animation, much of The LEGO Movie 2 is on the agreeable side of things but it does feel like screenwriters Phil Lord & Chris Miller have set their sights primarily on rendering sibling angst through animated LEGO figures this time around and put the humor on the backburner. That becomes a problem since The LEGO Movie 2 still insists on being a comedy instead of just primarily focusing on the more dramatic and allegorical story elements it's clearly more comfortable with. This obligation to making things a comedy means we get a number of jokes that feel oddly stale and obligatory, including some tired vomit gags, well-worn pop culture references and a number of recurring jokes and comedic side characters (like a clumsy banana played by Ben Schwartz) that miss the mark.

The hit-or-miss nature of the comedy leads to a slow-paced middle portion of the story that's heavy on explaining new parts of the mythos of this LEGO universe intended to parallel real-world experiences of the live-action human sibling characters and light on successful gags that could help keep the plot moving. If I was getting antsy during this part of the movie, I imagine far younger kids will be even more restless during this part of the story. Some of why the comedy feels more lackluster in execution may also come down to newcomer director Mike Mitchell. Much like Gary Ross trying to do a pale imitation of Steven Soderbergh's directing style with last year's Ocean's 8, Mitchell keeps trying to channel the sensibilities original LEGO Movie directors Phil Lord & Christopher Miller, but much of the time he misses the mark in trying to replicate their style of absurd wit.

Many of the best parts of The LEGO Movie 2 are when it establishes its own identity and it's a shame that Mitchell's direction too often feels like it's hamstrung by hewing so closely to what came before it. Though the humor and direction leave much to be desired, The LEGO Movie 2 does succeed as an allegorical exercise, particularly in the numerous clever touches it uses to depict the desire of Finn, who it's implied is just now becoming a teenager, to be seen as more adult and grown-up through the LEGO world of Emmet and friends. The allegorical story elements really kick into high gear in a third act that turns out to be both the most successful portion of the story and home to an excellently executed emotional beat.

Also working well is the incorporation of a handful of musical numbers that get a lot of mileage out of Tiffany Haddish's strong vocals (what can't she do?) and some cleverly written lyrics. Meanwhile, the voice acting remains solid as ever, even if returning performers like Elizabeth Banks, Allison Brie and Charlie Day have little to do. Chris Pratt delivers probably the most noteworthy vocal turn that doesn't belong to Haddish as Pratt pulls double duty with two different roles that see him bouncing off himself in an entertaining fashion. The way Pratt portrays polar opposites Emmet and Rex interacting with one another is one of the most fun elements in a movie that feels more at home with dramatic allegories than it does with witty comedy. The former element works well enough to keep The LEGO Movie 2: The Second Part afloat but I just wish a movie about LEGO's didn't so often feel awkward when it came time to actually have fun with its toys.
Posted by Douglas Laman (NerdInTheBasement) at 11:02 AM