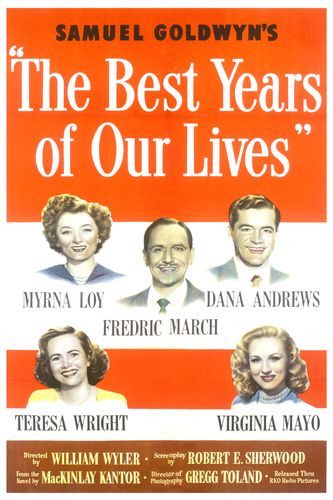 Where was American cinema supposed to go in the wake of World War II? In the broader sweep of history, 1950's American filmmaking emphasized grandiose spectacle intent on keeping the masses distracted from reality and those new-fangled television sets, but in the wake of World War II ending in 1945, we did have a handful of movies that offered up reflections on real-world wars instead of pure and simple escapism. These kinds of films would be far more prominent in the 1970s and 1980's when it was time for American cinema to come to terms with the Vietnam War and would struggle to gain much of a foothold in the modern-day American cinema landscape where less challenging reflections on war like Lone Survivor or American Sniper tend to win out over more thoughtful meditations on the subject.


Anywho, the most famous example of this kind of drama to emerge in the wake of World War II was The Best Years of Our Lives, a William Wyler directorial effort that managed to snag Best Picture at the 19th Academy Awards over It's a Wonderful Life. If online award season discourse had existed in that era, The Best Years of Our Lives and It's a Wonderful Life jockeying for Best Picture would have been the La La Land vs. Moonlight duel of its day! The plot of The Best Years of Our Lives focuses on a trio of soldiers, Fred (Dana Andrews), Homer (Harold Russell) and Al (Frederic March), returning home from their duties in World War II, though they each face unique struggles in adjusting to civilian life.

For Fred, he's got to deal with both employment woes and a lover who seems to only value him as an item she can flash around for all the world to see. Al, meanwhile, has a loving wife and daughter but struggles with alcoholism. Finally, Homer is dealing with how his family and potential lover are reacting to his new prosthetic hand. Robert E. Sherwood's screenplay examines these struggles over an extended period of time, hence the 172 minutes runtime, and on a character level, much of it is quite interesting mostly because the script actually takes time to examine what's going on inside the minds of its individual characters instead of just using their predicaments as springboards for cheap melodrama.

There's this great scene involving the character of Fred that serves as a sterling example of how well The Best Years of Our Lives depicts the kind of woes our lead characters are experiencing in return to normal civilian life. This scene begins with Fred walking through a field where all these airplanes that were used in WWII now sit abandoned and waiting to be turned into scrap metal. As the camera pans up, we see this wide vista solely occupied with once trusty airborne machines now tethered to the ground with nothing to do but wait for their demise. It's a haunting image followed shortly thereafter by a similarly harrowing scene showing Fred, sitting in the cockpit of one of these planes, being surrounded by his memories of the horrific noises of war. He may have left the battlefield, but the battlefield has not left him.

That's a sentiment that's made clear as a bell in this evocative sequence while the storyline involving Homer is similarly effective at communicating his own personal turmoil at feeling like a stranger in the presence of familiar faces. One of his big scenes, where he shows his potential lover, Wilma (Cathy O'Donnell), what his day-to-day routine is, is a powerfully realized through the performance of Harold Russell. You could have fooled me that Russell wasn't a professional actor, he's so good in the subtle physical nuances of his performances while his line readings and chemistry with his fellow leading actors Dana Andrews and Frederic March is superb. He really earned his two Oscars (yes, two!) with his work in The Best Years of Our Lives!

Though the climactic Homer and Wilma scene is quite emotionally affecting, primarily thanks to the performance of Harold Russell, I couldn't help but notice how Wilma's lack of discernable personality in this sequence highlights an overall flaw with the movie that sees the female characters solely defined by their relationships to the three male leads. Yes, because this is a story about three male WWII soldiers adjusting back into civilian life the plot and supporting cast were always going to orient around this trio of protagonists, but it doesn't feel like Wilma, Peggy (Teresa Wright) or the significant other's of Fred and Al have much of a life beyond the men they're enamored with. The Best Years of Our Lives does such a good job fleshing out its lead male characters that the only downside to this accomplishment is that it highlights how the female supporting players leave much to be desired in terms of depth.

The only other real major flaw that nagged me in regards to the script for The Best Year of Our Lives is how Al's subplot revolving around his problems with drinking end up going nowhere. Maybe the complexities of this storyline couldn't be explored properly under the Hayes Code restrictions of this era, but it does feel like an odd plot detail that ends up just puttering out. On the other hand, the direction of William Wyler is by and large excellent, particularly in his blocking of big crowd scenes (like any time we get to Fred in his department store job) that always keeps track of what the viewer should focus on. His filmmaking sensibilities are certainly put to good use in The Best Years of Our Lives, a drama that's certainly got some notable shortcomings but overall works well as both a standalone movie and an example of how American cinema was trying to grapple with the new state of the world in the wake of World War II coming to a close.
Posted by Douglas Laman (NerdInTheBasement) at 11:21 AM