Unimaginative Scares Are The Name Of The Game For Blair Witch 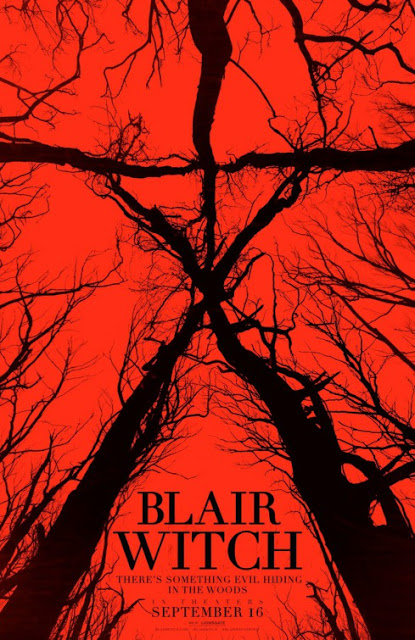 For full disclosure purposes, let me briefly run down my thoughts on The Blair Witch Project. I love that 1999 horror movie, it's got a sense of restraint to it that's absolutely terrifying, tapping into just how scary the feeling of being lost in an unknown environment can be in an extraordinary way. Though the feature was divisive upon its initial release, it made a bunch of cash at the box office, spawning a sequel the following year (which I haven't seen) and now a second follow-up entitled Blair Witch.


Adam Wingard, the filmmaker behind You're Next and The Guest, helms this newest entry in the Blair Witch Cinematic Universe, which follows James (James Allen McCue), the brother of Heather, the lead character of the original Blair Witch Project, heading out into the woods where the fabled Blair Witch is supposed to reside in order to find his sister whom he believes to still be alive. Of course, everything is filmed on cameras, namely by Lisa (Callie Hernandez), a friend of James and budding documentarian who wants to shoot the whole thing for a college course.

I'm gonna try not to spend the whole review for this film just repeating how Blair Witch fails to stack up to its predecessor ad nauseam, because then this essay would be just repetitive and it wouldn't be fair to Blair Witch as its own individual project. That being said, Blair Witch leans so heavily on the original 1999 film it's kind of impossible to talk about it without bringing up the original Blair Witch Project, which is one of the greatest flaws of Wingard's new take on the Blair Witch mythology. It basically comes off as a retread of an earlier far superior film to a shocking degree. Even the new ways of filming that have emerged with new technology in the past 17 years don't get much room to flourish, with the only real noteworthy technological advancement (a drone) getting stuck in a tree after barely any screentime.

Anything new that Blair Witch trots out is basically limited to a pervasive amount of fake-out jump scares (a trick the film employs so frequently that they event make a wink-wink comment about it) and some over-the-top moments that seem to betray the more subdued atmosphere of the first movie that Blair Witch so clearly wants to emulate. The original Blair Witch Project got so much horror mileage out of just watching three normal people slowly deteriorate as more subdued things (like waking up to find piles of rocks or those stick figures) occurred to them. Character-oriented scares relying more on atmosphere are far more frightening than a bunch of loud noises or tents flying up in the air abruptly.

Now, it's not at all a bad thing for sequels to differ from their predecessors in tone and execution. On the contrary, a number of great sequels (Captain America: Civil War and The Empire Strikes Back for instance) go in a completely different direction than earlier films. The problem with Blair Witch is that it's replaced the idiosyncratic vibe of the first movie with generic horror movie nonsense, especially in a climax that seems to have been lifted directly from some sort of Conjuring knock-off with some briefly appearing wonky looking demons(?).

Now, to be fair, there are a few moments scattered throughout where the film manages to re-capture the haunting "What's out there?" vibe of the original, but they're so infrequent that all they do is serve as a stark reminder of how middling the rest of the motion picture is. Perhaps a few of the scares would be better served if the found-footage filming style of the movie didn't render certain scenes borderline incoherent visually. After awhile,  I just amused myself with noting how many of the young 20-something year old actors in this movie seem to resemble more high-profile actors. Our lead guy, James Allen McCune, looks like a dead ringer for Jai Courtney while Callie Hernandez seems to be Cecily Strong's doppelganger.
Posted by Douglas Laman (NerdInTheBasement) at 8:44 AM