Wiener-Dog Is An Agreeable If Unexceptional Todd Solondz Effort 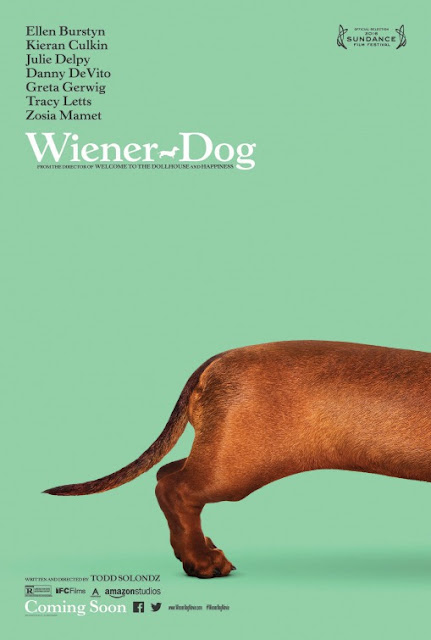 When it comes to household pets, I'm more of a dog and guinea pig person with a hankering for certain cats (preferably ones that don't act like complete jerks, which is difficult because, y'know, cats) sprinkled in there for good measure. While I've never owned the breed of dog commonly referred to as a wiener dog, I've had plenty of experience with these cute critters over the years and can attest firsthand to their loveable nature. No wonder filmmaking Todd Solondz was compelled to make a feature film, appropriately titled Wiener-Dog, centered on this particular breed of canine.


Wiener-Dog divides itself into four different stories, the first detailing a young boy trying to raise a wiener-dog as a pet, the second involving a young woman (played by Greta Gerwig) going on a cross-country trek with her canine companion in order to catch up with an old High School crush. Then a bizzare little intermission occurs (if this is supposed to be a homage to a specific film or something, it totally flew right over my head) and then we get two final stories that have no relation to each other nor the first two tales in the movie.

One of these plots concerns Danny DeVito as the struggling film professor at a college campus and the final story centers on an elderly woman (Ellen Burstyn) interacting with her troubled granddaughter and the concept of impending death. The individual stories are mostly fine, save for the first tale which runs the one-note concept of "Dogs sure are hard to raise!" into the ground and then some. Otherwise, they're mostly agreeable slices of storytelling and the variety in terms of locations and types of characters depicted in each individual tale lends a welcome sense of variation to the overall movie that helps it avoid feeling too repetitive.

The primary theme of the story is the concept of death, which plays as factor in all four of the tales and is pretty blatantly the whole point of the final epilogue-ish scene of the picture. Wiener-Dog doesn't really have anything too illuminating to say on the matter, going for more perfunctory takes on the concept of mortality like "Kids struggling with the idea of loved ones passing on" and there's a similarly routine nature to the directing and cinematography, whose only real impression on me comes in the form of me wondering why green was such a recurring element in the lighting and coloring of the movie.

I'm unaware of any connection between the color green and the concept of death and/or dogs in general so it just came off as a weird visual tick for me. There's quite a bit of material in Wiener-Dog that falls neatly under that specification classification of "Why is that here?", including the previously mentioned elements like a strange country music infused intermission and that taxidermy centered epilogue. There's this sense that anything and everything that crosses this movie's mind is being tossed into the movie, which sometimes works (just you wait until you see how bonkers Danny DeVito's story gets in its conclusion) and other times comes off like the entire feature is grasping at straws in terms of coming up with plot points that can keep its short stories moving.

Wiener-Dog is diverting enough while it lasts, but I do wish it came off as more cohesive, because there are certain moments in here that suggest the movie could have become so much more. At least the exceptional cast (how great is it to see Kieran Culkin again after his fantastic supporting turn in Scott Pilgrim vs. The World?) is game for the darker material and there's a super adorable pooch hopping around on-screen for much of the running time. That's gotta account for something, even if the mere presence of a cute doggie isn't enough to compensate the flaws that drag down Wiener-Dog.