No One Escapes The Invitable In The Seventh Seal 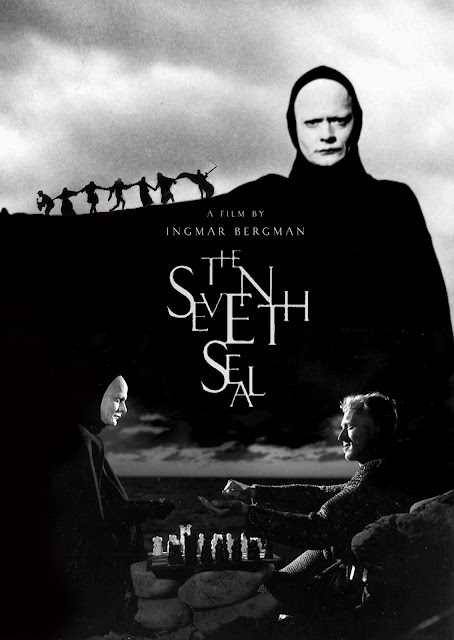 Rare is the work of fiction that doesn't at least notice the presence of death. Some of the most famous large-scale blockbusters of the past few decades like Harry Potter and Star Wars have their entire plots motivated by loss, parents are always biting the dust in animated Disney fare and the 1957 Swedish motion picture The Seventh Seal revolves its entire story around a personification of death following around one man, Antonius Block (Max Von Sydow), in the time of the Crusades. This is also an era where the Black Plague is ravaging the land, taking countless people's lives and leaving many in a state of understandable panic.

The Seventh Seal focuses on Antonius over the course of a single day, which starts with him having an encounter with Death (Bengt Ekerot) itself and the two engaging in a chess match. The two cross paths and attempt to resume their game many times over the course of this day all while Antonius and his companion Jons (Gunnar Bjornstrand) travel across the land and encounter a number of individuals, most notably a husband-wife duo of performers that go by the name of Jof (Nils Poppe) and Mia (Bibi Andersson).

There's this unique atmosphere conveyed by The Seventh Seal from its very first frame that had me captivated from the start. There's an aesthetic that feels like it would inspire the likes of Mad Max: Fury Road in the decades to come in the way it depicts a world where events so horrific have become commonplace. The everyday nature of things like the Black Plague don't fully erase the understandable fear commanded by such entities, but people do manage to go about their day-to-day lives despite the constant presence of death and pain in their world. It's almost like The Seventh Seal inhabits a post-apocalyptic realm, one where people are just trying to survive from one day to the next.

It's a transfixing way to approach this story, one that helps make it clear why, after going through all this suffering and torment, Antonius is currently turmoiling over the presence of God in his life and desires more than anything in his life concrete knowledge about the existence of a greater being. Instead of getting such knowledge, he'll have to settle for the constant presence of Death, whose one of the films greatest creations. This is one of those characters who just works in every way you can imagine, from his dialogue that rides a fine line between being imposing and charmingly casually ("Fitting, isn't it?" he remarks upon realizing he'll be using the black pieces in the super important chess game between him and Antonius) to the way the story never has his presence overwhelm the plot proper. He shows up when he needs to, never overstaying his welcome which would, by proxy, undermine his threatening presence.

And whenever Death does appear, he does in a manner that's utterly terrifying thanks to the lack of pomp and circumstance given to his entrances. His sudden appearances are not treated as opportunities for cheap jump scares nor does he have a chilling orchestral score to accompany his presence. He just all of a sudden appears from the ether, always eliciting scares thanks to the intimidating presence of the actor playing him and the foreboding lighting or camera angles chosen to depict him. Him just suddenly entering the film with no warning also manages to reflect the all too real way that death can just suddenly come into anyone's life.

The Seventh Seal is obviously committed to exploring the concept of death in an age where dying was thought of as an occurrence that could happen anyday, leaving the world in a sullen place. Surprisingly, the movie finds quite a few opportunities for levity to enter the picture, most notably in the way that the various differing personalities in the ensemble cast manage to bounce off each other. Jons helping a vengeful blacksmith come up with various insults to hurl at an opponent is a great example of this, a way to demonstrate the personalities of the two individual characters (Jons is quick on his feet while the Blacksmith tends to be short on brains while big on brute force) in a style that recalls how, in real life, moments of frivolity can help shine a bright light on ones true disposition.

There's a lot going on in The Seventh Seal even when just looking at the various real life events that occur in the time period in which the story itself is set. Then you get to the ensemble cast that is at the focus of The Seventh Seal and the complexities only get further intricate. The elaborate storytelling isn't just extremely entertaining to watch though, it's also got a larger purpose when it comes to the films examination of the concept of death. So many atrocities, including religious extremism taking people's lives (most notably women) and the inescapable Black Plague. are occurring at once in this realm of suffering, but then here comes Death, appearing in a "What-you-see-is-what-you-get" manner. There is no deceit to his appearance or actions, he's exactly what he purports to be. The endless intricacies of this world make the presence of such a straightforward creation like Death all the more chilling.
Posted by Douglas Laman (NerdInTheBasement) at 3:18 PM