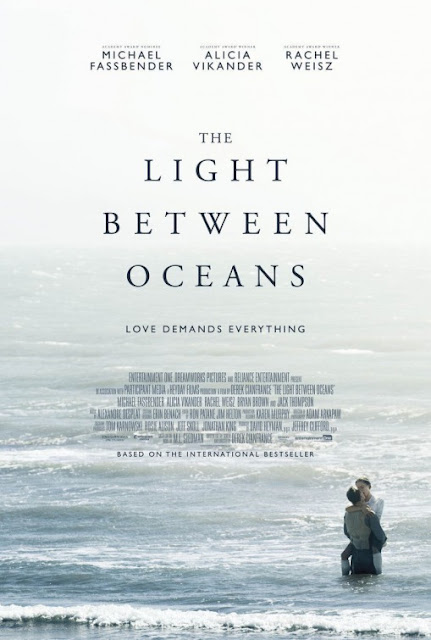 When Disney and DreamWorks partnered up for a distribution deal back in 2009, visions of their future together were filled with hope and glory. And while some noteworthy effort emerged from Disney distributing DreamWorks movies for them over the past five years (most notably in top-notch Steven Spielberg efforts like Bridge Of Spies and Lincoln), mostly it led to forgettable films like Real Steel , The Help, Delivery Man and Need For Speed. Now, the final film in the two studios deal, The Light Between Oceans, ends their distribution arrangement on a sour note. At least we'll always have War Horse.

Lighthouses are not gonna care for themselves, that's a certain truth. Someone's got look after them and help guide ships in the night and that duty happens to fall for Tom Sherbourne (Michael Fassbender), a soldier in World War I who must now live on the remote island where the lighthouse is located. Soon after starting his post at the lighthouse, Tom briefly returns to the mainland and happens to catch the eye of Isabel (Alicia Vikander). The two soon fall in love, get married and repeatedly try to have a child, though they fail to do so twice. Just as their hope begins to run out...a baby in a dinghy washes up on the shore of their little island.

That crucial element of the plot has been at the forefront of the marketing campaign of The Light Between Oceans, but what they don't tell you is that the baby is not alone in the dinghy. There's also the dead body of the baby's father in the boat too, which Tom and Isabel proceed to bury on the island. It's a very odd and dark plot point and just one of the many times this movie seems incapable or maybe just unwilling to take notice of the darker material its working with. As shocking as it may sound, treating the concept of kidnapping and hiding a dead body like a Nicholas Sparks romance drama is not a particularly great idea.

The entire script for The Light Between Oceans is filled with elements like this that just struck me as poor to a baffling degree. In terms of plot structure, it appears writer/director Derek Cianfrane was taking a cue from his far superior 2013 work The Place Beyond The Pines, in that both films try to tell stories that span over long periods of time and try to show how one person's life can affect multiple individual. Pines used this idea to create a compelling multi-generational ripple effect while The Light Between Oceans is a far more tedious affair devoid of the character-based stuff (among many many many other things) that made Cianfrane's earlier work so riveting.

Despite running over 130 minutes, the film is in an odd hurry to speed past establishing the romance between Tom and Isabel that the entire movie fixates on. The duo go on one picnic, exchange some tepid dialogue and then Isabel says they should get married. That's exactly how it plays out in the picnic, and being executed in such a stiff manner, it comes off as such an uncomfortable sequence. And then the middle portion of the movie centers itself on numerous extended shots of Michael Fassbender looking off into the distance as he contemplates the situation he's trapped in as if the moralities in the act of kidnapping a child are somehow "complex". Alicia Vikander, meanwhile, gets nothing to do in this part of the story and for much of the movie in fact, a terrible waste of one of 2015's most amazing acting discoveries.

While The Light Between Oceans concentrates on the love between Tom and Isabel, the relationship I can't get out of my mind after seeing this movie is how cinematographer Adam Arkapaw seriously seems to be committed to super-duper close-up shots considering how much he uses them in this film. Nothing wrong with this shot choice inherently, but using it so pervasively makes the visual aesthetic of The Light Between Oceans as monotonous as its script. Hell, even Michael Fassbender fails to be utilized properly here. The actors comes off as mostly unremarkable in his turn in this movie with the only thing that stands out in his performance (and not in a good way) is that he delivers 98% of his dialogue in this on-edge and intense tone. This becomes a particularly noteworthy hindrance in scenes where he's doing something tranquil, like reading his "daughter" a bedtime story in the same vocal inflection that he used in X-Men: First Class to threaten former Nazi's. Such an odd and poor decision in an anemic movie that's not at all short on concepts that fail to work.
Posted by Douglas Laman (NerdInTheBasement) at 8:46 AM