Remember That Time When Brad Paisley Fought Back Against The Malevolent Forces Of Shifting Gender Norms? 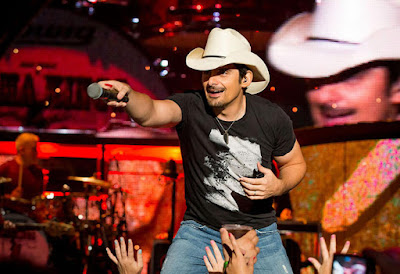 The idea of recognizing that the concept of gender might be more complex than just the binary constructs created by general society seems to be one that many find challenging, despite the fact that the way an individual see's themselves in terms of gender literally has no impact on another human being in any way shape or form. High-ranking Republican politicians across the country (including a number of bozo's like Lt. Governor Dan Patrick in my own home state of Texas) have spent countless hours ensuring that the crusade for frivolous things like "equality" and "acceptance" won't happen in our lifetime.

Eight years ago though, when these same politicians main focus of bigotry was gay people, one musician dared to tackle the concept of shifting gender norms in American society. Leave it to Brad Paisley, the guy whose concept of sexual advances on women centers around the concept of checking them for ticks, to be the man for the job. Now, I was a big fan of Brad Paisley as a kid, huge one in fact. And the guys plenty of good songs in his discography to be sure, namely in the more slow-paced ballads more centered on pathos. Then, We Danced, He Didn't Have To Be and especially Letter For Me are all emotionally rich tunes that show great care in both their lyrics and Paisley's vocal delivery.

It's whenever Mr. Paisley decides to tackle material that requires more heft or nuance that he begins to stumble. There was an understandable fall-out after his 2013 track Accidental Racist tried address the concept of modern day racism by noting how the mere existence of gold chains were on par in terms of awfulness with the iron chains used on slaves for decades. There's a similar sense of tone-deafness present in Paisley's 2008 song I'm Still A Guy, which managed to be the number one song on the Billboard Hot Country Songs chart for three straight weeks.

The song begins with lyrics (which were written by three Cis dudes, including Paisley himself, Kelley Lovelace and Lee Thomas Miller) that decide to start out with a sentence than anything else. Paisley notes to (presumably) his wife/girlfriend that when she see's a deer "you see Bambi and I see antlers hanging up on a wall." Sooooo, the lead singer of this tune is unable to look at woodland critters without imagining how he could slaughter them and use them as decorations in his own home? What a keeper. Then the song goes whole-hog into all sorts of tired gender tropes about men and women that just make the tune sound hackneyed above all else.

And so the first verse culminates by describing the ultimate affronts to Paisley's manhood as "walking [his girlfriend/wife's] sissy dog and holding your purse at the mall". Wow, is this where the hashtag Masculinity So Fragile came from? The song plods along with a piano and guitar-heavy (a tuba also gets solo time to shine in the final verse of the song) instrumental accompaniment that sounds surprisingly derivative of Paisley's past songs. And then we get to the final verse, where Paisley declares war against what he see's as the very degradation of the sacred institution known as "rugged manhood".

"These days, there's dudes getting facials" Paisley intones in the final verse, as the more restrained instrumental accompaniment (only a tuba joins his vocals in this stage of the song) allows the words he's spewing out to take center stage. After he describes the horrors of men getting "deep spray-on tans and creamy lotion hands", the guitars come roaring in as he notes how, despite "all these men are lining up to get neutered...[he's] still got a pair, yeah, honey, I'm Still A Guy." It's a passage of lyrics clearly designed to demonize the idea of men living in any way that doesn't conform to the idea of masculinity put out by Cabela's that seems almost intentionally designed to make Ted Nugent and Kid Rock and their followers sexually excited.

My main takeaway from the song now is it perpetuates the misconception many have that allowing people to leave the shackles of conventional gender norms and act how they want according to their personality will somehow take away something from them, like the concept of manhood is is an iceberg that these men who dare not to want to grip a tackle box will melt down with their zippo lighters designed to break down gender norms. In reality, the idea of tossing off gender norms to be the best possible version of you isn't taking anything at all from people who like fitting into standard gender norms. But that's not the way many people, including Brad Paisley and those who creepily relate to the message of I'm Still A Guy, see planet Earth. Deer are meant to be slaughtered, purses are meant for women and there's only one way to be a man in their views. Those ideas seem to very much play in far too many people's (to quote a 2013 Brad Paisley album) wheelhouse.