Snowden At The House Of Mouse 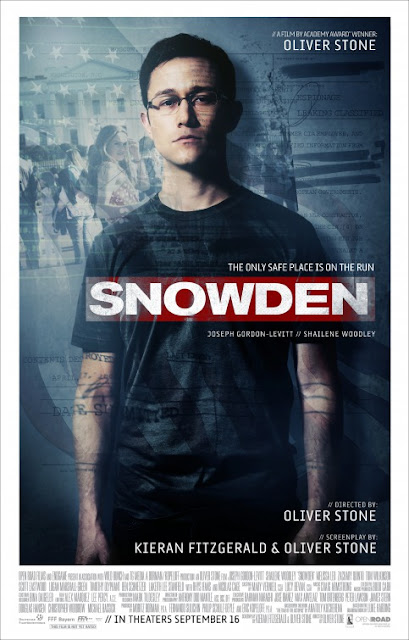 Hollywood loves making movies based on the lives of criminals. How many movies have been based on the lives of Bonnie & Clyde over the years? Hell, look at how many times O.J. Simpson has returned to the pop culture limelight this year over two decades after that infamous trial. And now Edward Snowden becomes the newest fugitive to receive his own movie, unimaginatively titled Snowden, with Snowden's crimes of leaking crucial Government data revealing to the public that the NSA was using its advanced technology to spy on innocent civilians.


The best biopics centering on real-life people (for recent examples, think Lincoln, Selma, The Social Network or the Broadway musical phenomenon Hamilton) utilize the real famous people they're based on and strip away the mythic demeanor that has consumed their personalities to reveal the beating human heart beneath their action. Abraham Lincoln, Martin Luther King Jr., Mark Zuckerberg Alexander Hamilton, they were all just people like us deep down underneath their noteworthy accomplishments. They were flawed, sometimes kind, sometimes not, but they were always human and the best projects focusing on such individuals recognize this simple truth.

Snowden, unfortunately, doesn't have all that much to say about its lead character or the moral quandaries he finds himself in. The most in-depth concept it presents in regards to Edward Snowden discovering that the Government is spying on its citizen in a post-9/11 world is "This is bad and made Snowden stressed", an overt simplification that robs the film the chance of exploring its protagonist in a more in-depth and dramatically engaging manner. If one is looking for anything revelatory in terms of approaches to the hot button topic of surveillance state, you won't find it here.

The inability to dig deeper in terms of its lead characters is a flaw in Snowden that spreads to plenty of other aspects of the movie, including any antagonistic figure in the film (which includes Rhys Ifans, saddled with a bizarre accent, as a high-ranking government official) whose painted as a stylized foe at best. Poor Shailene Woodley is also stuck playing the obligatory "girlfriend" role in romantic scenes between her character and Edward Snowden that feel more mandatory in their execution than anything else. It feels like director Oliver Stone has no interest in these more intimate scenes and just wants to get back to the political thriller content of the story.

Luckily, the more thriller-oriented parts of the movie are actually pretty solid, primarily thanks to the way the script is structured. Snowden has a framing device wherein the lead character tells three journalists, on the eve of the day when he'll leak all that crucial information to the world, about his decade-long realization that something shady is going on in the government. There's a sense of escalation to the premise that adds a subdued sense of ever-growing terror to even the quiet scenes. Plus, it allows the film to avoid the pitfall many biopics fall into wherein they try to cover too man years of its lead subjects life and end up making the actual movie feel scattered.

While early scenes with Snowden in the military feel like they could have easily been trimmed, there is otherwise a concise nature to the plot of Snowden that keeps it propulsive in a manner most beneficial to political thrillers like itself. It's also worth noting that Joseph Gordon-Levitt, despite carrying a voice affectation that sounded ridiculous in the trailers, works well in the lead role, especially in his body language that conveys the characters burgeoning sense of weariness over the years. I wish Snowden had any sort of depth when it comes to its various characters and themes, but it's an overall solid enough venture that stands heads and shoulders above recent Oliver Stone directorial efforts like W. and (shudder) Wall Street: Money Never Sleeps.
Posted by Douglas Laman (NerdInTheBasement) at 8:45 AM