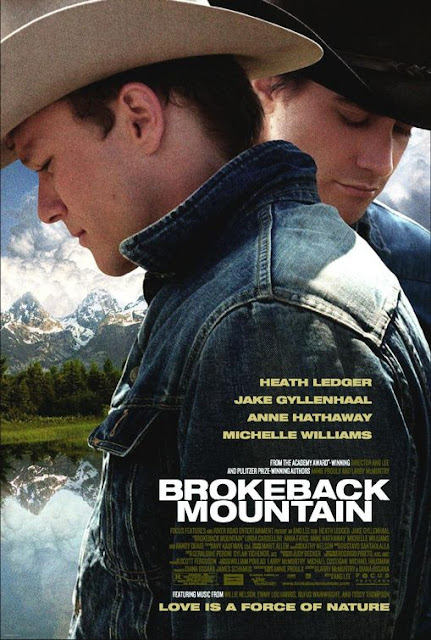 Much has changed in the past decade since Brokeback Mountain was released. The prevalence of LGBTQA cinema (which, of course, existed long before Brokeback Mountain. Hell, Box Office Mojo alone lists over 200 movies starring LGBTQA characters that were released prior to Brokeback Mountain) has managed to increase slightly, though a myriad of issues still exist for LGBTQA cinema, including how frequently Transgender characters are not played by Transgender actors, the trend of movies that don't dare to have unhappy endings for their LGBTQA characters (why, hello there best movie of 2015 Carol!) tend to get shut out at award ceremonies like the Oscars and the fact that it's notoriously difficult to give LGBTQA films noteworthy theatrical runs domestically.

As for the two lead actors in Brokeback Mountain, Jake Gyllenhaal, aside from the occasional detour into subpar movies like Southpaw and Prince Of Persia: Sands Of Time, has become one of the most consistently fascinating actors of his generation, showing remarkable range in the likes of End Of Watch, Source Code and especially Nightcrawler. And of course, Heath Ledger tragically passed away at the age of 27, a life brimming with promise cut all too short. Watching Brokeback Mountain now (my first viewing of the feature, for full context), the future that lays in store for these two actors looms over the film and the exceptional achievements obtained by the two leads in their performances here.

Ennis Del Mar (Heath Ledger) and Jack Twist (Jake Gyllenhaal) have been hired for a job requiring them to herd sheep through wild terrain , including Brokeback Mountain, for an extended period of time. In addition to revealing to me just how adorable baby sheep are (Jack, I believe, carries one on his shoulders and the little fella is just precious), this job offers the chance to see Ennis and Jack bond while they work. Ang Lee is very much a visual storyteller and dialogue is kept to a minimum in this portion of the story as the two men's individual personalities and demeanors are revealed through the two lead actors subtle but commanding turns that convey plenty in the most intricate detail of their individual performances . Jack is a bull rider whose go-get-em attitude is the direct opposite of the far more reserved manner of Ennis who barely says a word at first.

The two's relationship soon becomes sexual and the duo form an extremely close bond. Once their time herding sheep comes to an end, the two part ways to live lives deemed "normal" in this day and age, namely getting married to women and settling down with a family. The story tracks the two over multiple decades as their days at Brokeback Mountain linger on their minds. The grander scale of the story sometimes leads to characters, such as Jack's wife Lureen (Anne Hathaway) and Enis's all-grown-up daughter, Alma Jr. (Kate Mara) come and go in a manner that feels more than a tad abrupt. But following the lead duo over so many years does allow for their relationship to garner a grander connotation as the twos devotion to each other becomes clear even in the midst of personal squabbles and strife.

It cannot be overstated how much of the success of this film relies on its two leading men, both of whom seem quite comfortable in the more subdued environment they're performing in. As said above, Ang Lee is a visual storyteller and the screenplay by Larry McMurty and Diana Ossana keeps in rhythm with the filmmakers penchant for letting the visuals do the talking. That seems to suit fine for Gyllenhaal and Ledger, both of them taking super basic archetypes (Jake is lively, Ennis is reserved) and adding heaps of depth to these characters through their remarkable chemistry and being sure to bring plenty of subtle nuances to the physical aspects of their performances.

Ledger is particularly gifted at bringing Ennis to life. Ennis is a man filled with rage at his upbringing, his life and the world itself and that pervasive anger is constantly simmering under the surface. The way Ledger makes the character always seem on edge, like he wants to be sure he knows where he can leave with ease if things get too heated, is a thing of beauty. Jake Gyllenhaal is no slouch either though, with Jake Twist also having darkness bubbling underneath a misdirecting exterior. Brokeback Mountain finds plenty of emotional resonance with these two lead actors, and even its weaker aspects (for some reason, Ang Lee's directing is nowhere near as strong or noteworthy whenever he's in charge of framing shots in more mundane environments as opposed to the sprawling wilderness that much of the first third of the movie takes place in) tend to take a back seat in ones mind to the stirring love story that's carried by our lead characters.