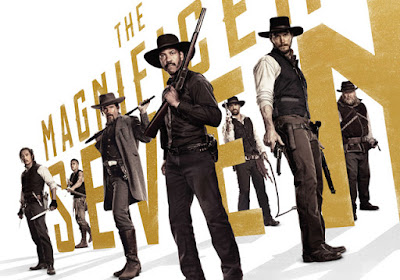 I'm actually surprised this one didn't crack $40 million in its opening weekend solely because of the presence of Chris Pratt and the larger scale of its action, but this is still a solid bow that's a great demonstration of the kind of allure Washington carries as an actor.  If The Magnificent Seven plays like the last Denzel Washington September action film The Equalizer, it would do just under three times its opening weekend, which would be good for a $108 million domestic total.

In second place was Storks, which debuted to an only OK $21.8 million, below expectations and beneath the majority of animated family fare that's debuted in late September in the last decade since Open Season proved you could open a title like that in this timeframe. There's no family movie competition on the way in October (aside from something called Middle School: The Worst Years Of My Life), so it's likely that Storks will do the usual 3.5 multiplier family movies usually have after their opening weekends in late September, which would mean a $75 million domestic cume.

Even for a lower budgeted animated feature like this (Storks only cost $70 million to make), it's easy to see that Warner Bros. was hoping for more from the movie on its opening weekend considering its large theater count (over 3,900 locations this weekend alone) and notable marketing effort. I'd wager that future efforts from Warner Animation Group, aside from the 2018 film Smallfoot, will concentrate on exploiting the LEGO and Hanna-Barbara brands (a new theatrical animated Scooby-Doo movie in 2018 will apparently kick off a Hanna-Barbara Cinematic Universe) instead of riskier original ideas like Storks that don't do nearly as well at the box office for them.

Sully continued to be a solid flyer in third place, only going down 36% last weekend to gross another $13.8 million. Sully has now grossed $92.3 million domestically and will soon become Tom Hanks nineteenth movie to gross over $100 million domestically. In its second weekend of release, Bridget Jones's Baby made another $4.5 million, a 47% dip that's not too good for a romantic-comedy that wasn't particularly front-loaded in its opening weekend. The newest Bridget Jones movie has grossed $16.4 million in ten days. In that same area of second-weekend declines was Snowden, which lost 48% to gross another $4.1 million, also a not too good drop considering Snowden is the sort of adult-skewing drama that should be having good weekend-to-weekend declines from word-of-mouth. Snowden now sits on a ten-day domestic total of $15.1 million.

Blair Witch held slightly better than many horror sequels in its second weekend, but since the majority of those dip in the 65+% range, holding only a tad better than that isn't exactly amazing considering how poorly the feature performed on its opening weekend. Blair Witch grossed another $3.9 million, a 59% decline from last weekend that brings the Adam Wingard film's domestic cume up to only $16.1 million in ten days. By contrast, fellow horror movie Don't Breathe was just behind Blair Witch in its fifth weekend of release and continued to perform exceptionally well, dipping only 33% from last weekend to add $3.8 million to its impressive domestic cume. Don't Breathe has now grossed $81.1 million and will likely crack $90 million before all is said and done, an insanely impressive feat for a film few saw performing this well.

Suicide Squad had another small dip this weekend, going down only 34% to gross another $3.1 million, a particularly impressive hold considering blockbuster The Magnificent Seven bowed this weekend. The group of DC Comic villains have now grossed $318.1 million. Considerably outside the top ten in eighteenth spot was The Wild Life, which felt the burn of new family movie Storks by grossing a meager $415,000, a colossal 85% plummet from last weekend. Also experiencing a massive decline was Hillsong- Let Hope Rise which dropped 70% to gross only $405,000, bringing its ten-day cume to only $2 million.

Two major new releases bowed in limited release this weekend. First up was Queen Of Katwe, which debuted in 52 locations, a considerably larger than usual theater count for such limited releases which typically go out in 2-5 theaters on their opening weekends. Queen Of Katwe grossed $305,000 for a per-theater average of $5,865. The Dressmaker also went out in slightly more theaters than usual limited release fare in its bow, grossing $180,522 at 36 locations for a per-theater average of $5,015. Queen Of Katwe will go into wide release in over 1,500 theaters this Friday while further release plans for The Dressmaker are yet to be determined as far as I know.

The top 12 this weekend grossed $95.8 million, down 25% from this same weekend last year when Hotel Transylvania 2 debuted to the biggest September opening weekend ever. With five days left in September 2016 (where does the time go?), currently the calendar gross for this month is $518.9 million, already ahead of the entire monthly gross of September 2014. If I were to wager, I'd say this September ends up being the third or fourth biggest September on record, which can be chalked up to the over-performance of Sully and Don't Breathe as well as the solid grosses for The Magnifcent Seven compensating for the underperformance of titles like Storks and Blair Witch.
Posted by Douglas Laman (NerdInTheBasement) at 7:33 PM