Walt Whitman Once Said To Dismiss That Which Insults Your Soul, So I Shall Readily Dismiss Yoga Hosers 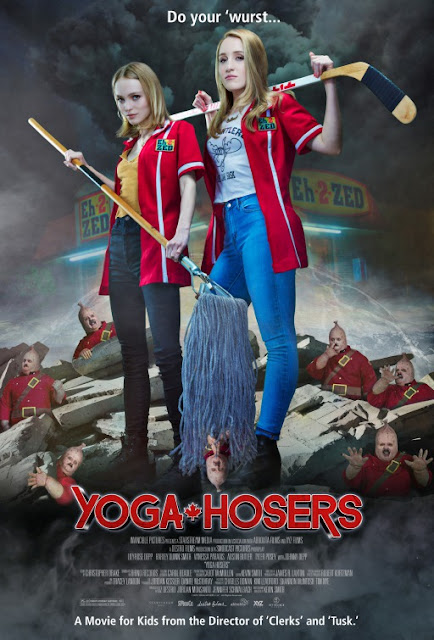 I can sometimes be a bit of a dummy when it comes to grappling with the more subtle nuances of distinctly esoteric pieces of art, so take this bold theory about Yoga Hosers that I'm about to drop on you with a grain of salt. I think this movie...was set...in Canada. It's kind of a shocking idea, but there are some subdued clues scatted throughout the motion picture that lead me to believe that that's where this specific tale is set. For instance, did you notice the endless parade of jokes about Canadian accents (which our two main characters infrequently sport)? Or the end credits where the two leads since a rendition of O, Canada? Stuff like that is what made my mind question if this movie was set in the Great White North.

Enough with the dripping sarcasm, let's actually talk about Yoga Hosers, the newest movie from Kevin Smith, which is set in the same universe as his 2014 film Tusk. Colleen Collette (Lily-Rose Depp) and Colleen McKenzie (Harley Quinn Smith) are two best friends who work at convenience store, a job they despise (the similarities to Clerks are not lost on Smith, who has one of the two leads shout "I'M NOT EVEN SUPPOSED TO BE HERE TODAY!" in the name of....fan-service? I don't even know anymore). The duo soon make the shocking discovery that an army of tiny bratwurst Nazi soldiers (all played by Kevin Smith) have invaded their convenience store and are killing people in their hometown left and right.

I'm sure that all sounds like utter nonsense and, to quote the narrator from the Krusty Krab Training Video, you'd be right! The entire movie is wall-to-wall randomness, with no realistic grounding to juxtapose the oddness. That was actually something the flawed but at least distinctive Tusk did quite well, it created scenes of gruesome tension punctuated by extended Michael Parks monologues and then plopped Justin Long as a walrus-man into the middle of that seriousness. There was a dissonance between the silly plot points and the serious execution that was at least a unique combination.

For Yoga Hosers, any attention to actual craftsmanship has gone out the window along with the concepts of pacing and humor. Yoga Hosers intends to be the most "zany" movie ever made, one that beats its audience over the head with "randomness" until their cranium is withered away like the skull of that one mobster who crossed Wilson Fisk on Daredevil. None of the "craziness" is actually all that funny, with all the various bizarre elements being no more insane than something you'd find on a subpar episode of Regular Show and even the weakest episodes of that usually solid TV show have the decency to be only 11 minutes long in length. You've got to actually have characters the audience can care about to make this craziness work, or do what Tusk did and at least commit to playing such absurd material straightforward so the dissonance between the tone and story elements can become entertaining in their own right.

Instead, the film dives head-first into piling on endless wackiness that's sorely lacking in any interesting characters of note. The idea of having a quasi-horror/action B-movie headlined by two teenage girls could have been an opportunity to showcase entertaining protagonists that are rarely given the chance to be the headlining act in this type of motion picture. But the two Colleen's that lead this adventure are just boring archetypes whose most notable personality trait stems from the totally unique idea that teenage women just can't live without their cell phones! What a cutting-edge observation of the millennial generation! I'm sure Yoga Hosers 2 will have similarly sharp and insightful comedy like "Airplane food is subpar" and "I just flew in from Newark and boy are my arms tired!"

Along for the ride is Johnny Depp as Guy Lapoint, a French detective (I think he's a detective, I know he's an author because someone drew testicles on a picture of him in his book, a prime example of what passes for comedy in this film) whose as grating as he is insufferable. Running a Pepe Le Pew accent into the ground faster than you can say "Dude, your careers in the toilet", his performance in Yoga Hosers isn't so much a parody of his former self but rather a drunk frat dude's terrible impersonation of another persons middling impression of what a quintessentially "quirky" Johnny Depp take on a broad French stereotype would be. There are some scenes with this character that just do not know how to ever end, though that's a pervasive problem with the entire movie, which is primarily made up of sequences chock full of awkwardly unfunny gags that never seem to stop. Time itself seems to come to a standstill in the myriad of "funny" moments gone awry in Yoga Hosers, which at least left me plenty of time to contemplate how on Earth Kevin Smith would ever be able to appropriately apologize to Canada for dragging their country into this disaster of a movie.
Posted by Douglas Laman (NerdInTheBasement) at 10:45 AM