Go Watch The Invitation And Then Come Back And Read My Spoilery Review For It. 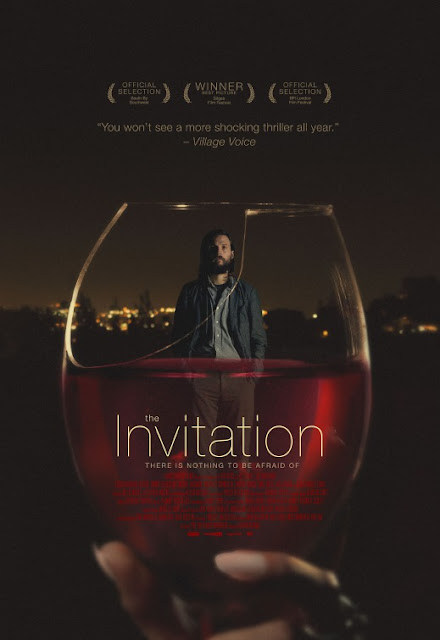 I typically don't do spoiler-filled reviews, that should be as clear at this point as my utter refusal to do letter or star grades to accompany my reviews. Even for classic movies that are decades old and whose big twists are as well-known as anything else, I'd rather not spoil things in case someone who hasn't seen said classic films comes along to my review. That being said, The Interview is one film where I feel like you must experience it going in cold, especially since the lower-profile release of the movie means there hasn't been a pervasive marketing campaign that's even given away the tone or basic conceit of the motion picture. So I urge you to go watch The Invitation on Netflix right now and then come back and read my analysis of it, alrighty? :)


I've never been the biggest fan of social engagements, partly because they strike me as overstimulating, partly because I had bad experiences with them growing up as a kid with Asperger's Syndrome and partly because I'm just super socially awkward. But man, even I've never been at an engagement as uncomfortable as the one Will (Logan Marshall-Green) finds himself in one night, wherein he's invited to his ex-wife's place for a little dinner party. Will has struggled to move on with his life after his son died and being reminded so explicitly of the past is not an experience he's looking forward to.

Will's ex-wife, Eden (Tammy Blanchard) and her new husband David (Michiel Huisman) welcome Will and his girlfriend Kira (Emayatzy Corinealdi) into their home (which is the house Eden, Will and their son used to live in) with open arms. Will and Kira are far from the only guests here, and even as the party gets rolling, Will struggles to join the proceedings due to flashbacks of the more peaceful past haunting his mind.  Further putting him on edge is that David and Eden have joined a creepy cult-like organization to help both of them cope with their traumatic pasts.

Now, this being a horror/thriller feature, you may suspect from the start that shit is gonna hit the fan eventually, carnage is inevitable, blood is gonna go everywhere, the usual hallmarks of the modern day entries in this genre. But the brilliant thing about The Invitation is it realizes the audience's preconceptions of the film and fiddle with said assumptions. Director Karyn Kusama is clutching a rug the audience is standing on and constantly moves her hands in a manner that suggests she's about to pull it out from under our feet....but doesn't. No no, the build-up is the name of the game and writers Phil Hay and Matt Manfredi want the viewer to be as uncertain of what's going on as Will is.

Concentrating on Will is a masterful idea in terms of building up the tension in the film. It's difficult for the audience to assess if he's really seeing or feeling some shady stuff is going down or if his judgment is being clouded by his jealousy of his ex-wife managing to find a way to utterly shut out the feelings of loss felt after their son died. The primary theme of loss and how people cope with it, as well as the strongly realized characters, rule this movie, which is a far better element to have determine a story than allow gore and violence elicit passe shock value dictate where a thin plot goes.

Before all that mayhem breaks out though, the characters get to be established in an extremely organic way thanks to the environment of a dinner party being obviously conducive to the concept of people talking about themselves and said conversations can be a great chance to see an individuals specific personality shine through in how they talk and present themselves. The Invitation gets just as dramatic mileage out of sequences that let haunting visuals do all the speaking and the trippy haunting aesthetic exuded by the dialogue-free sequences really heighten the suspenseful tone of the entire piece.

On the note of visuals, cinematographer Bobby Shore shows some true craftsmanship in his profession in the way he uses lighting to convey creepiness and uncertainty as well as making traditional conventions of up-scale homes (i.e. shimmering pools, lavish staircases, ec.) and making them feel more ominous just by the lighting and angle choices. It's nice that The Invitation as a movie realizes how scary everyday objects, as well as universal tasks like coping with grief, can truly be under well-realized circumstances.
Posted by Douglas Laman (NerdInTheBasement) at 11:24 AM