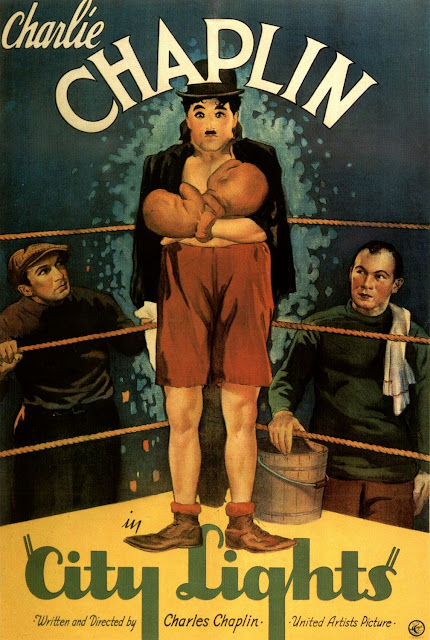 There's an undeniable sense of wonder that creeps into one's body while watching Charlie Chaplin move around on-screen. He makes the artforms of slapstick and physical comedy seem so natural, like he realizes that this was what he was put on this Earth to do and he's gonna do it as well as he can. The rhythm of his body movements is impeccable, ditto for the timing found in his humorous pratfalls. To watch Charlie Chaplin in a film like City Lights is to see a master at the top of his game and to be astonished that one man can carry such command over his craft.

It's not just in the ways of physical comedy that Charlie Chaplin proves to be adept in City Lights. He also takes on the duties of writer and director of this project and it turns out he's also quite proficient in those crucial tasks. The tale he's chosen to tell here is the quintessential "Beaty & The Beast" narrative archetype, a yarn all about romance between polar opposite human beings. Chaplin takes the reins on the lead role of The Tramp, a man who hasn't a penny to his name and more often than not finds himself in the middle of some kind of trouble he's inadvertently stepped into.

On a seemingly ordinary day, The Tramp runs into a blind woman (promptly given the name A Blind Girl in the opening credits) selling flowers, The Tramp immediately falls for the lady just around the same time he happens to save the life of a suicidal millionaire (Harry Myers). Here we have a story quite elegant in its simplicity, one that allow the chance for Chaplin to concoct numerous sequences of The Tramp finding himself out of his element and causing comedic shenanigans stemming from his ignorance. But it's not just an episodic series of events designed for repetitive gags, instead, Chaplin's script is subtly brilliant at incorporating character-based grounding into every one of The Tramp's antics. All of the comedy serves the characters and the plot and since both of those elements in City Lights are so well-realized the comedy spinning off of them is exceptionally executed and bursting with vibrancy.

It helps that there's a distinct lack of malice in the comedy, we're supposed to relate to The Tramp in his various faux pas as they're basically stylized variations on everyday social blunders an average person may find themselves in, Misplacing one's coat or other pieces of clothing, for instance, is a natural occurrence and one that City Lights has The Tramp encounter in a heightened fashion. Putting The Tramp through these sort of situations helps increase the character's relatability and add some grounding to the comedy. In other words, the slapstick antics found in City Lights are like the antithesis to the sort of comedy prevalent in the works of, say, Adam Sandler; there's actual craftsmanship and thought put into every act meant to elicit a yuk or a giggle.

One of the most famous quotes from Walt Disney (and there are plenty of axioms from that man) in terms of storytelling was "For every laugh, there should be a tear". City Lights certainly lives by such a saying, with the romance between The Tramp and A Blind Girl taking on particularly tragic circumstances in the final few scenes of the motion picture. And how about that, because the screenplay has gone through great pains to paint the individuals in this story as actual human beings, one cares about what happens to them when the going gets tough. Such an element of storytelling sounds simple when I explain it, but I've seen more than enough subpar comedies to know that that aspect is typically aside in favor of just throwing more unfunny jokes at the audience.

By contrast, City Lights is all about lathering its story in depth and jokes. It's not interested in sacrificing one element for the other but rather looking for both to compliment each other. Charlie Chaplin's exceptional screenplay pulls that off dazzlingly, particularly in the final scene of the movie that goes more for an ambiguous conclusion with a twinge of happiness rather than a full-out assault of cheerfulness. There's plenty of sharp storytelling to go around in City Lights, a movie that manages to demonstrate one of cinema's most iconic figures in top form.

Posted by Douglas Laman (NerdInTheBasement) at 8:42 AM