Wowzers, Rachel Getting Married Is Impeccably Made Harrowing Cinema 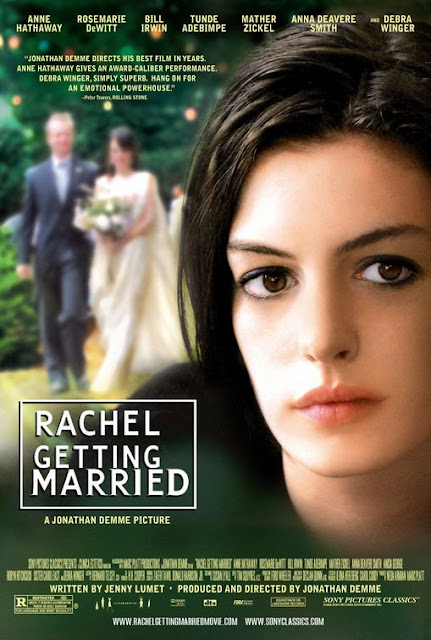 We never see the event that led to Kym Buchman (Anne Hathaway), the lead character of Rachel Getting Married getting put into a mental hospital. We hear people talk about it, including in the opening scene where a fellow patient mockingly asks her if she’s burned down any houses lately. But there are no on-screen flashbacks to the events that forever altered this character's life and the lives of her family members. Instead, we’re placed into the perspective of these people as everyday objects (like a plate) or casual phrases remind them of the past. Just through their tortured facial expressions, we can see how much these events impacted them, no flashbacks required.

All of those pent-up emotions are experienced over the course of a seemingly joyous weekend concerning Rachel (Rosemarie DeWitt) getting married. Aren't weddings supposed to be a joy? Well, they can be but that prospect becomes challenging once Kym returns to the family homestead for a weekend. Released from rehab, Kym and her various family members, including her father Paul (Bill Irwin) have all sorts of unresolved conflict to deal with. This results in a number of extremely tumultuous sequences that prove to be harrowing to watch as well as a phenomenal showcase for the talents of all the actors involved, especially a game-changing lead performance from Anne Hathaway.

It’s immediately apparent that Rachel Getting Married will be capturing though those top-shelf performances through handheld camerawork that frequently opts for close-up shots putting viewers just a few inches away from the faces of our primary characters. At first, such a visual style instilled a pit in my stomach. I hate camerawork that can best be described as shaky-cam and can be seen in the works of Paul Greengrass and so many found-footage horror films. Typically, it just distracts the viewer from what’s happening on-screen rather than bringing us closer to the plights of the characters. Shockingly, not only did this camerawork not install nausea in my stomach, it might be one of the best examples of this style of camerawork.

For one thing, filming things in this manner feels appropriate for the event referend in the title of Rachel Getting Married. Whenever we’re watching events like the entire family gathered for dinner, it feels like we’re watching something akin to home video footage people always capture at these sort of major family gatherings. For another, director Johnathan Demme and cinematographer eschew what so many found-footage horror films do and incorporate constant camera movements to remind the viewer of their filming style. Instead, Rachel Getting Married is steady in its intimate & intentionally less polished camerawork, the focus is on using the camerawork to bring us closer to the characters rather than having the characters repeatedly draw attention to itself.

The shockingly impressive camerawork is used on a harrowing screenplay that captures the angst of the lead characters in an appropriately anxiety-inducing fashion. From the moment she steps into her Dad’s car, every line of dialogue exchanged by the protagonist and her family members are laced with double-meanings. Everybody at this wedding has things to say but keep trying to play it sly by injecting them under the guise of everyday conversation. Whether you’re Kym or Rachel, navigating all of these unspoken issues is like trying to make your way through an impenetrable maze. This inescapable sensation had me clenching my teeth and curling up my fingers early on in the runtime and I didn’t ease up until a few minutes after the film finished. With all this stress-inducing conflict brewing under the surface, it isn’t long before such feelings come to the surface and Rachel Getting Married makes sure that its overt demonstrations of the perspectives of its characters are handled as well as its more subtle approaches to that same material.

Partially, this feature succeeds in this manner because of how appropriately messy these confrontations are. A big showdown between Rachel and her sister ends up dovetailing into an abrupt announcement that Rachel is getting married, a realistic depiction of how a tete-a-tete can go from hostile to hopeful in the span of mere minutes. Also helpful is that Rachel Getting Married doesn’t hold back in depicting personal torment when it comes time for characters to speak their mind.
The people in this movie don’t speak in tidy pearls of wisdom. For instance, Hathaway’s character speaking openly in an AA meeting about how she can’t forgive herself is so brutally raw. She isn’t expressing this mindset through lines ready-made to be plopped on a shirt, instead, Rachel Getting Married has her communicating her pain in a manner that’s riddled with visceral pain and uncertainty. Similarly, Debra Winger’s most outraged cry of “YOU WEREN’T SUPPOSED TO KILL HIM!” towards her daughter is like watching a previously dormant volcano explode, you can just feel all the years of pressure blown away in an instant. It’s terrifying to watch unfold, this sudden burst of full-throttle emotion. That’s the kind of vividly-realized pain that Rachel Getting Married frequently employs in an engrossing manner.
Posted by Douglas Laman (NerdInTheBasement) at 12:03 PM