Slumdog Millionaire is the Best Kind of Crowdpleaser Inspirational Drama 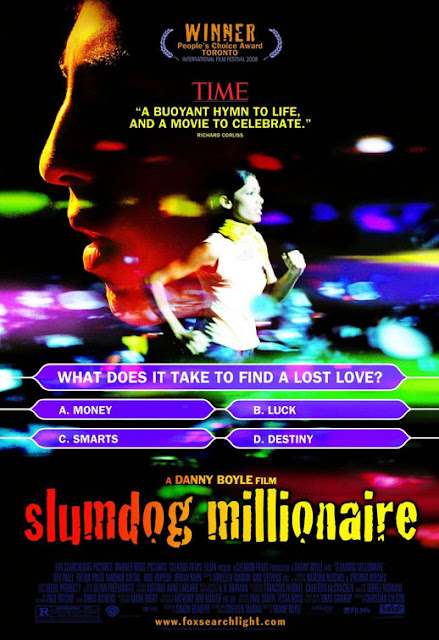 I went into Slumdog Millionaire dubious. It wasn't like I had heard overwhelmingly bad things about this 2008 Best Picture winner and I'm a massive fan of the film's director, Danny Boyle. However, the general perception I had gleaned of its rags-to-riches storyline made it sound like the kind of average cornball affair I'd probably end up being totally "meh" over. I could never have imagined that, by the time the third act of Slumdog Millionaire rolled around, I'd be totally enraptured by the lead characters story. Any movie that gets me that enamored with the lives of fictional characters may as well be a Billy Currington song, because they "must be doin' something right". Don't you love it when expectations get shattered?


We begin Slumdog Millionaire with the filming of an episode of the Indian version of the popular game show "Who Wants To Be A Millionaire?". The contestant on this particular episode is Jamal Malik (Dev Patel), an eighteen-year-old who grew up in poverty and currently works as a Chaiwala for a call center. He's the last person people would generally expect to do anything that would end up in the history books but as the episode goes on, he begins to answer every question that comes his way correctly. How is this possible? Well, there's no fraud or super-human intellect on display here. Flashbacks that dominate the film show that each question connects to some aspect of Malik's life.

Such a life has been full of every kind of turmoil imaginable, including Malik and his brother, Salim (Madhur Mittal), being forced to live on their own after their mother is killed. Part of this relentless tragedy is Jamal developing a bond with Latika (Frieda Pinto) as a child and then trying to reunite with her as an adult as well as Salim going down a dangerous path of working for local gangsters. Clearly, Slumdog Millionaire has all the elements of a traditional rags-to-riches tale. A hero who starts from the bottom, a love story, a fraught relationship with family members, these are all familiar storytelling details. How does Danny Boyle's Oscar-winning movie manage to execute these entities with such success?

For one thing, Simon Beaufy's screenplay decides to filter this story through a non-linear format that jumps around through three specific periods of time, Jamal's past, Jamal on Millionaire and Jamal being interrogated by an unnamed Police Inspector (Irrfan Khan). That third framing device is especially crucial as we see Jamal being outright tortured by police authorities because they suspect his game show victories could only come about by way of him cheating. Plenty of similar rags-to-riches tales show their protagonists enduring adversity but it's rare to find one lie Slumdog Millionaire that depicts its character experiencing victory before enduring even more anguish. It's not just a unique storytelling twist but it's a great example of how Slumdog Millionaire uses this story structure to make it clear how constant the struggles in Jamal's life have been.

Everywhere this guy goes, he's been followed by some sort of turmoil, even a friendly game show host who prides himself on being from the slums just like Jamal turns out to be the guy who turns Jamal over to the authorities on the suspected crime of cheating. Jamal's troubles come from everybody and everywhere and having the story structure emphasize so many different parts of Jamal's life conveys this aspect of his existence in a visceral manner. Beaufy's all-encompassing manner of capturing Jamal's suffering also helps to make the most triumphant moments of this character's journey all the more sweet to experience.

Also helping Slumdog Millionaire work as well as it does is how well both the directing and Dev Patels lead performance immerse one into the life of Jamal Malik. Danny Boyle has always been a director whose filmmaking frequently places viewers right into the mindset of his protagonists, think of the rapid-fire filmmaking that replicated the mindset of the leads of Trainspotting or the intimate filmmaking in Steve Jobs that put you uncomfortably close to that films titular lead. Here, Boyle uses his enveloping qualities as a director to put you right into the headspace of Jamal and Salim. When they have to outrun a mob that just killed their mother, Boyle makes sure that the camera is placed and moved in a manner that makes you feel like you're right there in the alley with them narrowly evading death.

Boyle's visual tendencies have usually been put to use on putting you up close and personal with tragic figures and equally wistful stories, neither of which are elements around in Slumdog Millionaire. However, his qualities as a filmmaker turn out to be a perfect match for this particular inspirational drama that's meant to leave you cheering rather than melancholy. When evaluating the directorial work of Slumdog Millionaire, one must also offer praise to co-director Loveleen Tandan. Trying to figure out who's responsible for what in director/co-director partnerships is a fool's errand but her prolific role in this production means she's clearly heavily responsible for how well Slumdog Millionaire comes together as an endearing production.

Of course, perhaps the most critical reason Slumdog Millionaire works as well as it does is the lead performance from Dev Patel. The character of Jamal Malik could easily have turned into a whole bunch of anguish with no humanity in the wrong hands but Patel (as well as the two child actors tasked with playing younger versions of Jamal Malik) makes sure there's a discernible personality to Jamal in even his most pain-ridden moments. I especially like how well Patel portrays Jamal as somebody whose upfront about the fact that he's not somebody exceedingly special, he's not a Chosen One figure nor is he a genius prodigy. He's just a normal person, one with determination and hopes of being with the one he loves. Patel's performance provides the endearing heart that drives Slumdog Millionaire to such soul-filling success. That'll show me for doubting the powers of Danny Boyle!
Posted by Douglas Laman (NerdInTheBasement) at 11:02 AM