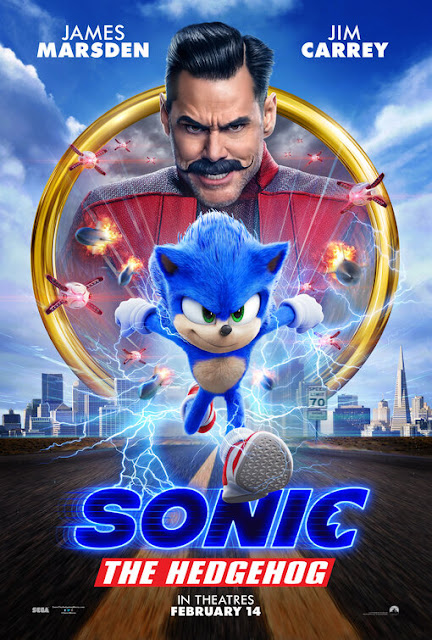 Sonic the Hedgehog is trapped between two influences. In one corner, we have the late-90's/mid-2000's approach to movies based on geeky source materials. Many of these titles were done on the cheap and retained only the most basic aspects of their distinct source material in favor of ripping off other then-popular blockbusters. In the other corner, we have the modern-day approach to movies based on geeky source materials, where adhere to classic comics/cartoons/video games is key and actors spend months promising in interviews that the movie they're starring in is "for the fans". Trying to indulge in both approaches leaves Sonic the Hedgehog a strange but not all that interesting creation.


On the one hand, Sonic (voiced by Ben Schwartz) at least looks and acts like Sonic. Why he even makes a reference to consuming chili dogs. Fans of the character can rest easy on that matter. On the other hand, the influence of older blockbusters like Catwoman or X-Men in how a larger-than-life character has been planted firmly into a drab-looking real world. Sonic now moves around in Nevada and California while he and nemesis Dr. Robotnik (Jim Carrey) go through trite origin stories before the credits sequences promise fans of the source material a prospective sequel more faithful to the video games they love. I don't really care about Sonic's fidelity to source material (I know little about Sonic outside of the original Sega Genesis games) but I do care how blatantly cynical the screenplay is.

This Jeff Fowler directorial effort spends much of its runtime just regurgitating all-too-familiar plot elements (the in media res opening of Emperor's New Groove/Deadpool/Megamind, the basic story outlines of Hop or The Smurfs) before plopping out a pair of paint-by-number credits scenes meant to cast aside negative memories of what you just saw with positive memories of what could be down the road. In the here and now, we have Sonic the Hedgehog, which sees the wisecracking blue critter being stuck on Earth so that he can be protected from villains who want his powers. Forced to live alone, he's developed a friendship with a local cop named Tom Wachowski (James Marsden) from afar. Sonic is forced to introduce himself to Tom once Dr. Robotnik starts searching for Sonic.

To evade this baddie, Sonic & Tom embark on a road trip to San Francisco to retrieve a bag of magical rings that can teleport Sonic to another planet. If there's a commendable quality about Sonic the Hedgehog it's that its at least coherent. In bringing Pat Casey and Josh Miller's screenplay to life, Sonic the Hedgehog at least flows decently from scene-to-scene. It doesn't have a bunch of contrived subplots that overcomplicate matters nor does it suffer from clumsy editing indicating haphazardly executed reshoots. While the screenplay doesn't leave one's head spinning or confused, it does come up short in creating something actually memorable. Sonic may label himself and Tom as "loose cannons" at one point, but the movie they headline always plays things safe.

The jokes, the character arcs, the settings (how many blockbusters have been set in San Francisco lately?), Sonic the Hedgehog always opts for such formulaic decisions. That really undercuts the potential fun you could have in a movie about Jim Carrey hunting down a humanoid blue rodent. Also a problem with the writing is the lack of urgency or weight to anything, even the elements of supposed danger driving the plot. At one point, James Marsden’s Tom becomes a suspected terrorist wanted by the government yet it doesn’t have much of an impact on anything. Tom still waltzes around in public with no problem.

Similarly, a third act sequence where Robotnik chases Sonic through San Francisco sees buildings and cars exploding but none of it means anything, they might as well be fighting in a plastic replica of the city rather than San Francisco itself. This chase scene reminded me of when Big Ben got off-handedly destroyed in The Mummy, it's all just a bunch of noise and chaos without any sense of fun or stakes that could make it fun. This lack of gravity deflates much of one's interest in Sonic the Hedgehog, especially the ham-fisted attempts at sentimentality. Poor James Marsden deserves so much better than just delivering cloying lines of dialogue against a CGI hedgehog.

Even he can't salvage the worst of the treacly emotional moments but Marsden fares fine overall in the lead performance. Jim Carrey, on the other hand, is doing a limp reheated version of his 1990's comedy routine that makes one yearn for him to try challenging material like I Love You, Phillip Morris and Eternal Sunshine of the Spotless Mind again. While I didn't care for Carrey's work here, the audience at my screening ate his turn as Robotnik up and also seemed to highly enjoy the overall movie. Perhaps Sonic the Hedgehog will work for general moviegoers, certainly, I imagine kids will like it fine. However, I just couldn't help but walk away from it disappointed at what a routinely put-together endeavor this is. A song from the video game Sonic Adventures 2 features a lyric that announces "Got places to go, gotta follow my rainbow." Instead of a rainbow, the Sonic the Hedgehog movie merely follows forgettable family movie formulas.
Posted by Douglas Laman (NerdInTheBasement) at 4:00 PM