The Director of Spotlight Delivers a Solid Family Movie With Timmy Failure: Mistakes Were Made 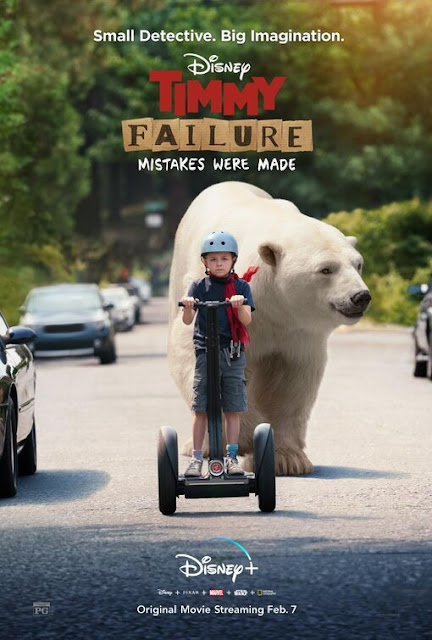 Tom McCarthy has had quite an eclectic career as a director and a writer. For one thing, he directed a Best Picture-winning movie in the form of 2015 title Spotlight and is also the filmmaker behind acclaimed titles like Win Win and The Visitor. Between such projects, he's also become a go-to writer for Disney. After scoring an Oscar nod for his work writing the story for Up, he's proceeded to become a regular writing fixture at the studio thanks to penning titles like Million Dollar Arm, Christopher Robin and even an uncredited polish on The Nutcracker and the Four Realms. Given his extensive experience there, it was inevitable that Tom McCarthy would end up directing something for the Mouse House.

That directorial effort has emerged with Timmy Failure: Mistakes Were Made, a movie McCarthy also writes along with Pearls Before Swine creator Stephen Pastis. Based on a children's book penned by Pastis, the titular Timmy Failure (Winslow Fregley) is a boy living in Portland, Oregon who should be focusing on his 5th-grade studies but is instead swept up in his imaginary world as a private eye. Timmy proceeds to solve crimes with his polar bear sidekick Total, all while causing mayhem for the people around him. Timmy has no time to linger on any mistakes that have transpired in his search for clues, he's got cases to solve and a reputation as a world-class detective to maintain.

If the director of Spotlight helming a kids movie written by the guy behind the Pearls Before Swine comic sounds like a case of Hollywood Mad Libs gone haywire, thankfully, the final product ends up being a surprisingly cohesive endeavor. While McCarthy is known for previously directing low-key indie films, that grounded attitude turns out to be something Timmy Failure uses to its advantage. While Timmy Failure occasionally goes into digressions delving into the fantastical mind of its titular lead (like a dreary vision of what Middle School is like), most of the time Timmy Failure filters its protagonist's perspective through a realistic lens. This is not a Tracer Bullet scenario where a kid's imaginary persona is all filtered through a classic film noir look.

Timmy's narration may be that of a private eye, but on-screen visuals clearly show him as a youngster walking with his head tilted downward much to the befuddlement of his classmates. The dissonance between reality and imagination makes for some amusing comedy, particularly in regards to Total. A silent sidekick to Timmy, McCarthy nicely opts for restraint in terms of gags involving Total. Instead of having this polar bear be a hyperactive character constantly mugging for the camera like one of the critters from Dolittle, Total is usually just lingering in the background or underneath a park bench. The sight of such an enormous arctic creature casually inhabiting such mundane environments is more than enough to get a laugh.

Other nicely restrained jokes include recurring gags with Timmy misunderstanding common idioms or phrases that lead to fun pun-based pieces of visual humor that totally seem like the sort of thing Stephen Pastis, the guy behind this comic, would come up with. On the other hand, some other gags, like one involving Timmy and his rival Mr. Crocus (Wallace Shawn) being mistaken on their proximity to the rushing water being released from a dam, are clumsily executed on a visual level. It also must be said that, on a personal level, the Timmy Failure character did sometimes grate on my nerves. That's no fault on the lead performance of Winslow Fegley, he delivers solid work portraying a kid fully committed to a detective persona. It's more that the writing of Timmy Failure frequently stumbles in making the protagonist amusing enough to make his dismissive attitude towards other people bearable (no pun intended).

That having been said, the eventual resolution for Timmy Failure's character arc, though nothing especially trailblazing, is reasonably satisfying in balancing out mature growth with childhood imagination. Plus, like fellow Disney+ original movie Togo, it's nice to see that Timmy Failure is the rare modern-day live-action movie aimed at kids that doesn't feel the need to talk down to younger viewers nor does it just hand them the kind of stale cinematography you could find in reruns of Disney Channel sitcoms. Yay for family movies actually being told and filmed with competence! That kind of proficiency means Tom McCarthy's consistently unexpected career has managed to deliver another charming motion picture with Timmy Failure.
Posted by Douglas Laman (NerdInTheBasement) at 11:44 AM