Ambition and Thoughtfulness Are the Cornerstones of Within Our Gates 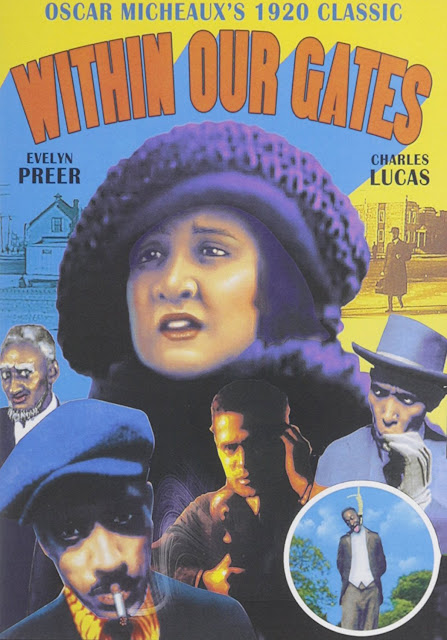 The widespread perception of independent American cinema was that it was limited to cheapie B-movie horror fare until the 1990's when the likes of Kevin Smith and Robert Rodriguez, plus less widely-discussed but no less pivotal figures Cheryl Dunye and Leslie Harris, used low-budget cinema to redefine who got to make movies and how. However, there have always been examples of people scraping together pennies to put together film productions divorced from the studio system. Heck, this practice dates all the way back to 1920 with Within Our Gates, the second directorial effort by Oscar Micheux and an early entry in the genre of "race films".


Within Our Gates follows a whole slew of storylines, each usually examining a different aspect of life for Black individuals in then-modern era of America. This alone puts Within Our Gates apart from films from the same time period, or even modern-day titles like Green Book, that grapple with matters related to race through a lens that frames these matters as an element of the past. This way, white audiences can see racism as a problem but something that was taken care of in decades past. Here in Within Our Gates, 1920 moviegoers are given examples of how prejudice is still a widespread issue for people of color and the assorted ways prejudice manifests.

That element of recognizing modern-day racism emerges through the various plotlines, the most prominent of which concern Sylvia Landry (Evelyn Preer). She's a young woman who, after getting inadvertently wrapped up in a whole mess of shenanigans perpetuated by her cousin Alma, sets out on her own path. This path ends up taking her to a financially-struggling school dedicated to providing education for young Black individuals. In order to help get this important institution on more firm financial ground, Sylvia sets out on a quest to raise $5,000 for the school. It's a crucial task but also a daunting one that ends up involving a wealthy White woman that nearly (accidentally) ran Sylvia over.

While deciding whether or not to donate $5,000 to Sylvia's school, this financially prosperous lady turns to a friend named Mrs. Stratton for advice. Stratton is one of the best examples of Within Our Gates demonstrating the assorted ways racism can manifest. Specifically, Stratton is used as an example of how wealthy classes can block upward mobility for impoverished groups. She may not have a Klan hood or be engaging in lynching but her dismissive attitude to the idea of Black people receiving educating is shown to be just as much of a danger to racial equality as anything else. Her expression of this dismissal is depicted in a casual manner, such abhorrent attitudes towards other human beings is treated as a throwaway matter-of-fact line of dialogue in the characters eyes.

She uses that style of delivery to also express her desire for Black people to adhere more to the attitude of local submissive Black preacher Old Ned. That character interacts with two White people who make the remark that they don't mind Black people but insist that they be unable to vote. Here's another thought-provoking way Within Our Gates depicts modern-day racism against Black people, with this manifestation consisting of White people who think of themselves as allies to marginalized groups so long as those marginalized groups don't become too autonomous. A follow-up scene showing Old Ned, previously acting like a classical Uncle Tom stereotype, all alone and expressing remorse for his behavior in his actual personality is an even more thought-provoking sequence as it gets inside the psyche of somebody ashamed of the way they survive in a corrupt system.

Within Our Gates is full of scenes like these that show an astute sense of thoughtfulness. In order to convey all these perspectives on the experiences of Black Americans circa. 1920, Michaeux's script jumps all over the place not just from character to character but even to entire side-tangents divorced from the primary storyline. Does that make the whole affair messy? More than a bit, but the ambition on display, as well as the successfully absorbing nature of the individual sequences, helps to make the byzantine structure manageable. Also helping to make Within Our Gates' complexity manageable is the impressive fact that it makes use of non-linear storytelling.

It's truly astonishing that a movie in 1919, so early in this mediums lifespan, made such a bold move in embracing non-linear storytelling but that's just what Within Our Gates does to help tell a tale about Sylvia's adopted family being hunted down and lynched. Even when it flashes back to the past, Micheux's script isn't done pushing boundaries as he manages to do Rashamon before Rashamon in telling a single story (the murder of a white landlord) from differing perspectives. Similarly bold is a scene where Efrem, a Black butler exclusively loyal to White people, envisions his gruesome fate just as he realizes he's about be lynched. A fantasy digression within a flashback, that's a turducken of circa. 1919 cinematic audacity! Oscar Micheaux's endless creativity and ambition is apparent in his filmmaking and his tackling of weighty matters related to Black experiences in the feature Within Our Gates.
Posted by Douglas Laman (NerdInTheBasement) at 11:38 AM