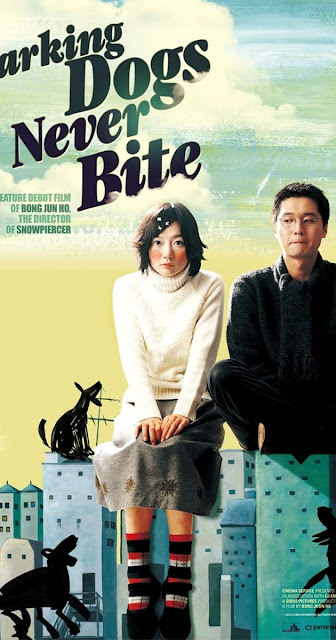 After his film Parasite scored a historic Best Picture win at the most recent Academy Awards ceremony, it's safe to say that South Korean filmmaker Bong Joon-ho is a household name. However, he wasn't always this famous. Once upon a time, he was just a newbie filmmaker making his directorial debut with the 2000 feature Barking Dogs Never Bite. Though not as ambitious in scope as many of his subsequent films, Joon-ho is already demonstrating with this inaugural feature the kind of thoughtful filmmaking and impressive exploration of weighty themes that would come to define his output. Right from the get-go, Bong Joon-ho was making films that could stimulate your brain and provide entertainment without breaking a sweat.


Barking Dogs Never Bite opens with on-screen text reassuring viewers that no animals were harmed in the subsequent film. That's good to know given all the cavalcade of violence endured by doggos over the course of the production. Such violence comes at the hands of Ko Yun-ju (Lee Sung-jae), an academic who nurtures dreams of being a professor. It's a noble ambition but he feels he's owed the possession as a part of a larger self-entitlement complex that ends up inspiring him to go take care of a nearby dog in his apartment complex that just won't stop yapping. How does he take care of that pooch? Why by locking them in a piece of furniture in his complex's basement! Much like eating Pringle's chips, Yun-ju doesn't stop his dog abuse with just one as he begins to take out his frustrations about his current life on dogs he percieves as living a much cushier life.

These recurring dog demises eventually capture the attention of Park Hyun-nam (Bae Doona), a bookkeeper tasked with making sure all the "Lost Dog" fliers have their appropriate stamps and seals who takes it upon herself to figure out whose behind this canine conspiracy. This story eventually fixates on one of the most pivotal recurring themes in Bong Joon-ho's works; the rich & powerful do not care about the little people. Whether it's in the elite figures in Snowpiercer who see people in the back of the train as "a shoe" or in the Park family in Parasite who ignore the suffering of their household workers, Joon-ho's movies are unflinching in the way they show how figures of influence can have detrimental effects on everyday people.

To boot, these movies tend to get into the nitty-gritty of how the definition of a powerful person can fluctuate based on the situation. Your average part-time retail employee is clearly overpowered by Bill Gates but that same employee becomes the powerful person in a dynamic where they interact with somebody whose homeless.  These complex approaches to the idea of power manifest throughout Barking Dogs Never Bite. From a Dean that Ko Yun-ju is trying to impress that has a tendency to get prospective professors so liquored up that they fall into incoming trains to the fact that Yun-ju tries to feel powerful in his life by killing dogs, Bong Joon-ho's thought-provoking approach to power dynamics is alive and well in his debut feature.

This approach to power also ties into another trademark facet of Joon-ho's work, the complex morality of his characters. This is especially prominent in a climactic chase scene where Park Hyun-nam is being chased by a homeless man who was planning on cooking a dog. Why is he chasing after her? Turns out, it's not exclusively to get back the dog that was supposed to be his supper, rather, it's to return a bowl of chopped radishes that Hyun-nam dropped earlier in the chase. Later on, this same man, now arrested, notes that the prospect of being in a jail cell is a much more enticing one than living on the streets."I am arrested but I'm not afraid" he notes in a news interview and suddenly the circumstances this guy has to live with everyday, where he doesn't know where his next meal is going to come from, hits the viewer like a ton of bricks.

This character could have just been a caricature that solely served the purpose of providing a chase scene but instead, the screenplay (credited to Joon-ho as well as Song Ji-ho and Derek Son Tae-woong) takes this figure into a much more thoughtful direction. Would this guy have even turned to eat dogs if society hadn't turned its back on him and other homeless figures? Not to mention that all dog murders are pinned on this guy that fits a stereotypical profile of looking "sketchy" whereas more polished individuals like Ko Yun-ju and another apartment worker that are shown to also be responsible for doggie murder get off scot-free. Barking Dogs Never Bite is the earliest example of a Bong Joon-ho film exploring systemically ingrained problems affecting our most vulnerable communities that don't sacrifice entertainment in the process of such exploration.

To be sure, there's plenty of entertainment to be found in Barking Dogs Never Bite, including in the top-to-bottom superb cast whose best turns come from a terrific slimeball performance from Lee Sung-jae as the anti-canine protagonist and an enjoyable supporting turn from Go See-hee as the best friend of Park Hyun-nam. The script also creates plenty of perfectly suspenseful sequences (including one where Ko Yun-ju is hiding out in the apartment complex basement and nearly discovered) that'll keep you on the very edge of your seat while composer Jo Seong-woo reinforces the films unique identity by way of a score that has delightfully unexpected jazz influences. It's one of a number of bold creative decisions in Barking Dogs Never Bite that pay off spectacularly and, in the process, kicked off a great filmmakers' career in style.
Posted by Douglas Laman (NerdInTheBasement) at 10:38 AM