In Laman's Terms: Two Years of Black Panther And The Need For Actually Risky Blockbusters 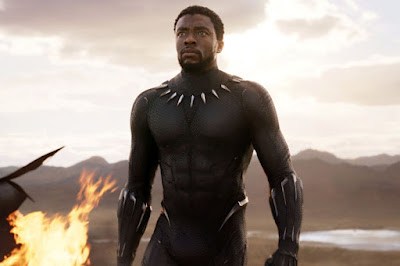 The Marvel Cinematic Universe has repeatedly found some of its best moments in defying the odds and doing what many perceived to be impossible. Granted, this is a franchise that, even in its most nascent state, was owned by a major comic book company and then absorbed into the Disney empire. Their artistic endeavors have always had a steady safety net that, say, your average Lynne Ramsey or Barry Jenkins movie doesn't have. Still, there was something daring about starting up an independent film studio in 2005 before embarking on a quest to translate the expanded connected universe of their comics into a cinematic format despite not having any of their A-list characters (like Spider-Man or Wolverine) at their disposal.


The Avengers took a bunch of B-list heroes (and also The Hulk) and turned them into a box office sensation. An idea that sounded like madness in 2009 was now a reality and Marvel Studios followed that accomplishment up with an even riskier move; handing over an entire $197 million budgeted blockbuster to an unknown group of superheroes known as the Guardians of the Galaxy. Six years later, every blockbuster has a soundtrack full of vintage tunes that serve as an amusing contrast to the on-screen action mayhem. But in 2014, Guardians of the Galaxy was a total bolt out of the blue, another sign that Marvel relied on stories rather than established household names to carry their movies. Groot may have been unknown before Guardians of the Galaxy but is there any doubt that anybody knows who he is now?

However, there was a catch here to the bolder tendencies of the Marvel Cinematic Universe. Marvel may have had unconventional choices to headline movies, but such features had extremely conventional approaches to race and gender. Heck, it's noteworthy that Marvel Studios found a raccoon the right kind of "unexpected" choice to headline a film rather than a superhero who was a woman or a person of color. Avengers only had room for one woman and one person of color in its entire cast while Guardians of the Galaxy made Gamora, the one woman on its titular team, the archetype inhabited by many token ladies in male-dominated group movies. Gamora got to be the stick-in-the-mud amongst a gaggle of exuberant boys who eventually develops romantic affection for the male lead, a cookie-cutter writing approach in a movie whose best moments thrived on the unexpected.

But two years ago this past Sunday saw the two-year anniversary of a Marvel Studios title that finally saw this outfit delivering a film that defied traditional blockbuster wisdom in terms of what communities get to headline blockbusters. I'm talking, of course, about Black Panther, the third directorial effort from Ryan Coogler. After years of systemically-ingrained racism and falsehoods like films with Black leads never making money overseas (Django Unchained would like a word!) keeping Black characters from headlining Hollywood blockbusters, Black Panther's worldwide success was a beacon of hope. Not only were Black perspectives not a deterrent to blockbusters succeeding, but they were also the reason Black Panther ended up being as well-received as it was.

"The most personal is the most creative", so goes the Martin Scorsese quote that Bong Joon-ho relayed in his Best Director acceptance speech and that's a fitting encapsulation of why Black Panther works as well as it does. The action sequences in this tentpole are extremely fun, especially since Coogler isn't afraid to get really stylized in set pieces that involve the titular lead chasing down automobiles or helpful rhinos. However, what really stands out in this movie are those intimate moments that get at the heart of the points-of-view of the individual characters. That scene where antagonist Kilmonger takes a trip to his childhood apartment is a great example of this, especially in the perfectly-executed moment where Kilmonger briefly reverts to his childhood self.

It's the kind of intimate sequence that most blockbusters fail to include but Black Panther sees its primary villain as something much more tragic and human, one informed by pain rooted in the real world. After seventeen prior Marvel Cinematic Universe movies that predominately avoid getting entangled in real-world issues, Kilmonger explicitly referencing the suffering of Black people in the modern-day world rings certainly stands out and Kilmonger being rooted in recognizable elements of reality is carried over right into his iconic final lines. It's a phenomenal character who serves a microcosm of how Black Panther isn't afraid to actually be about or acknowledge matters that are far bigger than one comic book movie. The fact that this is a film told by a Black filmmaker with a predominately Black cast is not a side-matter of this production. Black Panther stands in a sea of blockbusters headlined by white dudes and reaffirms the importance & value of large-scale stories about Black people.

Two years later, the deeply personal and deeply thoughtful nature of Black Panther still sticks with me as does the experience of watching it resonate so deeply with viewers. The production design, the costumes, the moments of fun (M'Bakue showing up in the nick of time to save the day will never not give me chills), the moments of poignancy, this is the kind of movie that, like Mad Max: Fury Road, shows that blockbuster cinema does not have to sacrifice thematic weight to deliver rousing entertainment. It's the best Marvel Cinematic Universe title in terms of overall quality and easily the best thing to come out of Marvel Studios' tendency to take unexpected chances with its blockbuster fare.

As said earlier, Marvel has adhered to extremely safe and traditional approaches to gender, race and sexuality for the vast majority of their movies. They may be willing to take chances on obscure white dude heroes but even with a massive company like Disney backing them up, the prospect of making, say, a superhero movie with a Trans lead is seen as too much of a risk. It's an equation that reminds me of how Lindsay Ellis once noted that Disney struggles to tackle race in their live-action remakes of animated movies because there isn't an easily marketable approach to that topic. Similarly, Marvel Studios making, say, a Guardians of the Galaxy movie is the safe easily marketable kind of risk. You won't offend bigots by making a movie with a talking tree. But you might lose the dollars of certain potential moviegoers who are Transphobic if you do a film with Mya Taylor playing a superhero.

Risk is fun until you actually have to stand for something. Big companies tend to find it better to be complicit in the erasure of marginalized communities rather than risk losing a few dollars from bigoted customers. But Black Panther is the rare example of a major Hollywood corporation like Marvel Studios actually taking a stand against the default status of which marginalized populations can headline blockbusters (though the deletion of a scene confirming a supporting character as queer shows that even this project had its limits when it comes to inclusion). Future major Marvel productions like The Eternals (first MCU film with a woman of color lead and an explicitly queer character) and Shang-Chi seem to similarly be making noble strides in this department. However, the rest of Hollywood seems to be making little progress when it comes to this kind of prolific representation and even Marvel Studios has plenty of room left to grow.

Two years after the impressive feats of Black Panther, let's soak in the countless virtues of this Ryan Coogler directorial effort. It's a wonderful movie that should be a symbol for all of Hollywood that the toxic institutions keeping marginalized people from headlining movies should be torn down. Stories like Black Panther that aren't afraid to explicitly explore the perspectives of characters hailing from marginalized communities are important, they're vital and they make for great cinema. It's like Scorsese once said: "The most personal is the most creative."
Posted by Douglas Laman (NerdInTheBasement) at 9:00 AM