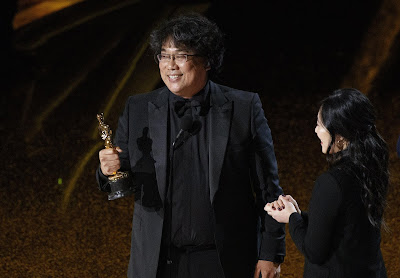 My first exposure to Bong Joon-Ho was through the poster art for The Host. As that weird eleven-year-old who frequently traveled across websites like IGN or ComingSoon.net, I frequently saw banner ads for The Host featuring that striking artwork of a tentacle emerging from the water clutching a screaming woman. How could such an image not immediately stimulate your imagination? What was that creature? What did it look like? Was that woman destined to be its only victim? It would take me about a decade before I finally watched The Host but that poster art was distinctive enough to make sure Bong Joon-Ho's first monster movie was seared into my brain. Even when that Host movie with Saroise Ronan and Max Irons was at the height of its marketing campaign, I always thought of Joon-Ho's feature first when it came to movies titled The Host!


I finally got the chance to see my first Bong Joon-Ho movie in the summer of 2014 thanks to Snowpiercer. This big-budget project was supposed to be Joon-Ho's first foray into more widely released cinema thanks to it being his first predominately English-language title and a big cast that included Chris Evans and John Hurt. The spiteful nature of Harvey Weinstein (who infamously wanted to drastically alter the movie against Joon-Ho's wishes) ensured that Snowpiercer would get only a limited release in North America. What a sad fate for an excellent movie that turned out to be the perfect introduction to Bong Joon-Ho's filmography.

Some of the most defining traits of Joon-Ho's works are found in spades within Snowpiercer. Morally ambiguous characters? Snowpiercer is packed with them, right down to Captain America himself playing a guy whose revealed to have had experience chowing down on babies. Thoughtful social commentary? You got it and then some. Bold tonal shifts, engrossing production design, a willingness to let women inhabit all kinds of different exciting roles, all the crucial elements of a Bong Joon-Ho movie are here in abundance. Perhaps the most important of those crucial Bong Joon-Ho movie elements found in Snowpiercer, though, is a high level of entertainment. Whether you're watching Mother, Memories of Murder or Okja, chances are you'll be getting that spectacular blend of top-notch filmmaking with captivating entertainment.

In America, there's this inaccurate perception that foreign-language films, by their very nature of being told in a language that isn't English, are "boring". The very presence of subtitles sends people's warning bells off and instills the sense that you're about to watch something that's a chore to watch rather than something actually entertaining. That's a nonsensical notion for a myriad of reasons but this aversion to foreign-language cinema persists nonetheless. If you ever wanted to look for a library titles that demonstrate perfectly just how entertaining foreign-language cinema, it's hard to imagine finding a better example than the works of South Korean auteur Bong Joon-Ho.

Though his movies cover all kinds of weighty topics like class, animal cruelty and police brutality, that doesn't mean they don't make time for all those entertaining elements that make moviegoing worthwhile. Some movies opt for brains over escapism or vice versa but Bong Joon-Ho's directorial efforts consistently deliver both elements effortlessly. Just try and not laugh at the most hysterical moments in Parasite or Okja, try and not gasp at the most shocking twists in Mother, try and not clap your hands in glee when an adversary shows up in Snowpiercer wielding multiple axes. So many see a foreign-language as a barrier to enjoying a piece of art, but that couldn't be farther from the truth. Whether told in Korean, French or Woloof, individual languages are just another means of expression to tell stories we can all be engrossed by.

The universally enjoyable qualities of Bong Joon-Ho's works are reflected in how widely beloved the guy has become over the course of the 2019 Award Season. Already an acclaimed figure in the cinephile community, Joon-Ho has crossed over into mainstream popularity thanks to his charming presence in interviews and high-profile awards acceptance speeches. T-shirts, memes, GIF's and so much more have been made about this guy and it's not hard to see why he's struck a profound chord with people. Joon-Ho stands for more than just a body of well-made and entertaining work or endearing award season antics. Prior to Parasite, no South Korean film had ever been nominated for an Oscar. Now, South Korean motion picture Parasite has become the first foreign-language film to ever win the Best Picture Oscar.

It's not hyperbole to say that Bong Joon-Ho is now a figure who has redefined what is possible for foreign-language cinema, especially in terms of what is possible for mainstream recognition for foreign-language cinema. People all over the world are now eager to check out Parasite and other universally-praised works of Bong Joon-Ho. The profile of South Korean cinema as a whole has been given a massive boost thanks to the Oscar victories of Parasite and the possibility of that boost being able to have a positive ripple effect on foreign-language cinema as a whole seems more likely than ever. With such impressive achievements under his belt, no wonder Bong Joon-Ho has become an icon as well-known for making Oscar statues smooch as he is for his talents as a filmmaker.

Time will tell if all hope generated by Parasite's Oscar wins translates into long-term positive changes to the perception of foreign-language cinema in America. For now, though, some things are certain. For one thing, history has been made with Parasite's Best Picture victory. I still can't believe it actually happened, it's like a dream that magically came true! For another thing, thanks to moments like his iconic Best Director speech (God, I get teary-eyed just thinking about it), Bong Joon-Ho has become a household name, an equally unbelievable achievement. Finally, what is certain, and has been certain even before this past Sunday's Academy Awards ceremony, Bong Joon-Ho makes incredible movies that are just as impressive on a technical level as they are on an entertainment level. They're just as transfixing as those internet ads for The Host that gripped my imagination thirteen years ago.

Watch the works of Bong Joon-Ho and any other foreign-language cinema that catches your fancy. You're in for something special. Just make sure to invite over your cousin Jessica (only child) from Chicago, Illinois whenever you watch them!
Posted by Douglas Laman (NerdInTheBasement) at 8:00 AM