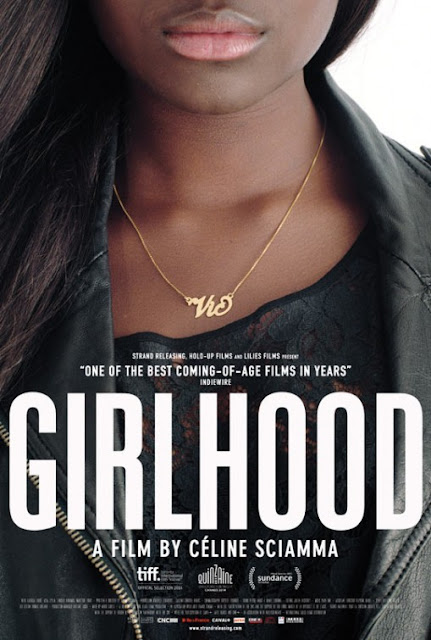 Back in February 2017, I wrote up a review of The Elephant Man, the first David Lynch movie I'd ever seen. In an attempt to look sophisticated, I tried to offer up a thesis for Lynch's entire filmography after seeing just one of his features. Said thesis said that Lynch's films were exclusively concerned with the outcasts of society. Like so many of my own attempts to appear knowledgable in a scenario where I'm clueless, it was laughably off-base. However, my inaccurate description of the core thematic trait of Lynch's works does serve as a solid descriptor for what's actually going on in the works of acclaimed director Celine Sciamma. Her films actually are about the experiences of the marginalized members of society and that's especially true of Girlhood.


Though it continues a central theme explored in all of Sciamma's works, Girlhood is the only one of her films that explores a marginalized point-of-view from the perspective of a person of color. Said person of color is Marieme (Karidja Toure), a sixteen-year-old girl living in Paris, France whose got a humdrum life. She's distant from her mother, her brother is abusive and her academic pursuits appear to be going nowhere. All around her, Marieme sees constant reminders that she's coming up short in the eyes of other people and institutions. She could use somewhere that she feels validated. That kind of space emerges in a newfound friendship with a trio of teenage ladies named Lady (Assa Sylla), Fily (Marietou Toure) and Adiatou (Lindsay Karamoh).

Girlhood proceeds to explore how Marieme finds some much-needed support in her life with her new chums but that doesn't mean all of her problems proceed to vanish. On the contrary, new intimidating challenges keep creeping into Marieme's life as she gets older. The consistent presence of adversity in the existence of Girlhood's protagonist is a perfect example of how Celine Sciamma's films are quietly raw in depicting how omnipresent systemically-ingrained struggles are. Her works don't exclusively linger on the misery of marginalized people but they are acutely cognizant of how obstacles they face are so enormous it's impossible to simply wipe them away.

Just as the primary romance at the heart of Portrait of a Lady on Fire doesn't automatically resolve all the enormous issues facing that films lead characters, so too does Marieme's new friendships fail to dissolve all her problems. This trait of Sciamma's work doesn't just make her films impressively in tune to reality, but as seen by Girlhood, they also make for super compelling drama. The way Marieme's way of asserting her independence and identity only tends to incur more wrath against her from male figures in Mariame's life like her boyfriend, her brother as well as an eventual employer named Abou (Djibril Gueye). Sciamma's writing in Girlhood hauntingly captures how women are predominately seen as just objects men feel entitled to control.

It's a status quo so firmly affixed to everyday reality that women, like Marieme, trying to fight against it tend to sink even deeper into its clutches, as seen by how Marieme abandoning her toxic brother ends up leading her to the employment of the similarly dangerous Abou. While the system struggles of Marieme are vividly and thoughtfully realized in Girlhood, the film also makes great strides to emphasize the sort of solidarity she finds in the friendships that she forms with Lady, Fily and Adiatou. Sciamma's unmistakably empathetic camerawork renders a sense of authentic warmth to any scene dedicated to these four teenagers just shooting the breeze together.

Within one of these hang-out scenes, another Sciamma hallmark is employed to excellent effect. Specifically, Sciamma's penchant for utilizing music to lend insight into the perspective of a character. In this case, such a trait is employed for an unforgettable sequence to Rihanna's Diamond in which Marieme watches her three friends dancing and lip-syncing the tune before joyously joining them. It's a remarkable sequence in every respect from how the lyrics of this widely-popular song take on such a specific intimate context within the confines of Girlhood to how Karidja Toure conveys Marieme's internal turn from nervousness to euphoria with solely her subtle facial expressions. This phenomenal scene isn't just the highlight of the excellent Girlhood, it's also a microcosm of the richly human filmmaking of Celine Sciamma.


Posted by Douglas Laman (NerdInTheBasement) at 11:37 AM