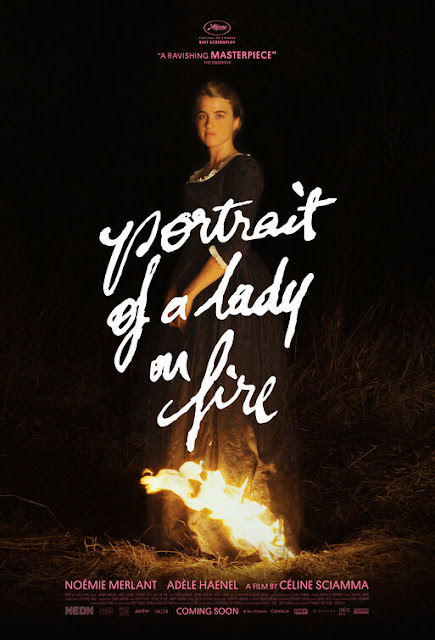 When Ava DuVernay saw The Irishman, she tweeted out a euphoric response to this Martin Scorsese masterwork that said "A film made by a filmmaker who feels free. Who all the tools. All the time. All the talent. And lives up to it." That statement ran through my head after watching the new Celine Scammia movie Portrait of a Lady on Fire. True, Sciamma did not have Scorsese's $156+ million The Irishman for her own tale of painting and romance. However, after her initial, decidedly small-in-scope, trio of directorial debuts, it's fascinating to watch Sciamma work as a filmmaker under lavish confines. Now she's got elaborate 18th-century European costumes & expansive locales to work with.

She too has far more tools, time and talent at her disposal and, much like Scorsese with Irishman, Scammia proves with Portrait of a Lady on Fire that can put her expanded creative canvas to exceptional use. Her fourth directorial effort follows Marianne (Noemie Merlant), a painter whose off to her newest assignment which includes painting a portrait for a wealthy woman named Heloise (Adele Haenel) whose set to be married. Heloise has refused to co-operate with the previous individual assigned to paint her and Heloise's mother, The Countess (Valeria Golino), informs Marianne that she must lie to Heloise. Specifically, Marianne must tell her Heloise that she is merely a companion to Heloise and then proceed to paint the bride-to-be in secret.

Lies don't end well, do they? Not only does creating a facade ensure that the initial interactions between Marianne and Heloise are rife with tension, but it also means that Marianne's first painting is not up to her standards of quality. She must engage with the truth if she wants to paint her subject properly. She and Heloise will have plenty of time to get acquainted with each other's true selves once The Countess leaves for a five-day vacation. What follows is a thoroughly riveting motion picture that eventually see's a captivating romance blossom between the two lead characters. Such romance would already be enough to make Portrait of a Lady on Fire an exceptional motion picture. But much like how Kendrick Lamar delivers remarkable lyrics in addition to his unforgettable vocal abilities, Portrait of a Lady on Fire isn't content to just excel in one area!

This Celine Sciamma directorial effort (she also wrote the screenplay) also serves as an extremely thoughtful exploration of the way each of these women are enduring in a society that puts them into confining boxes simply based on their gender. Heloise, for example, is kept from the outside world by an overprotective mother and seen only as an object to be wedded off while Marianne struggles to break through as a painter thanks to all sorts of challenges (like a rule forbidding women from painting male nude models) intended, in Marianne's words, "...to keep women from greatness." Once these two stop keeping their true motivations from each other, Marianne & Heloise can divulge their true struggles to one another. In the process, they find comfort in how they're not alone in their personally suffocating experiences.

This exploration of how society has so many built-in systems meant to hold women down and keep men up is done in a manner that pushes men nearly entirely off-screen. That's very much to the benefit of Portrait of a Lady on Fire. It's a decision that echoes how Sciamma's debut feature Water Lillies nearly entirely eschewed adult characters in order to draw greater attention to its teenage protagonists. Just as Water Lillies' sense of focus brought viewers closer to its characters, so too does Portrait's decision to focus exclusively on its women characters mean we get a greater chance to become closer to Marianne, Heloise and servant Sophie (Luana Bajrami). In the process, we also get a deeper understanding of how these three distinctly-drawn individuals try to maintain their own identity in the face of a society that wants to strip them of their own autonomy.

In the nine months since Portrait of a Lady on Fire debuted at the 2019 Cannes Film Festival, much has already been made about Celine Sciamma's gift for communicating so much without the aid of dialogue. At the risk of just repeating what everyone has already said ad nauseum, allow me to once again praise Sciamma's talents in this department. Much like the most evocative painting, Sciamma and cinematographer Claire Mathon can create an immediately striking shot that you just wanna stare at for hours on end so you can appreciate every intimate detail. This is especially true of any of the visuals found in the sequences set in exterior environments. Since these places, especially a nearby beach, are shown to be havens where Marriane & Heloise are free to be themselves, these environments are rendered in a far more visually scrumptious manner than the intentionally confining interior locales.

When these two characters are wandering the nearby fields or just standing by the open ocean, their surroundings seem to go on forever. A vast domain of brightly colored objects fill up the frame and it's all so beautifully-rendered, especially in terms of the color palette, that you can totally understand why Heloise's first inclination when she steps outside is to just run. Who wouldn't want to race through such gorgeous locations? As if all of that weren't enough, Portrait's assorted stunning environments are captured through incredibly thoughtful camerawork. I simply love how Sciamma and Mathon quietly transport the viewer into the perspective of the characters in certain shots, like when Marianne is first following behind the then-mysterious Heloise for the first time. Such subtly excellent camerawork is one of the many ways Portrait of a Lady on Fire immerses viewers into its engrossing world.

Said world also includes the central romance, which is just emotionally intoxicating. All of the aforementioned elements of Portrait of a Lady on Fire are plenty impressive in their own right but it's especially astonishing how well they all eventually come together to make the love between Marianne & Heloise all the richer. Sciamma's script that deftly explores the perspective of both characters, the enveloping visuals, the enthralling performances, they all come together to form something truly unforgettable. Marianne & Heloise's romance really is sublime in every regard, even something as simple as these two characters just lying in bed together is told through cinematography that aches with richly-drawn poignancy. Two figures forever told by society to not be themselves, to not follow their ambitions, now finding solace in each other's love. These scenes, like the rest of Portrait of a Lady on Fire, are utterly beautiful to watch. Allow me to quote the final word of DuVernay's aforementioned Twitter review of The Irishman to properly sum up my feelings towards Celine Sciamma's incredible Portrait of a Lady on Fire: "Wow."
Posted by Douglas Laman (NerdInTheBasement) at 1:32 PM