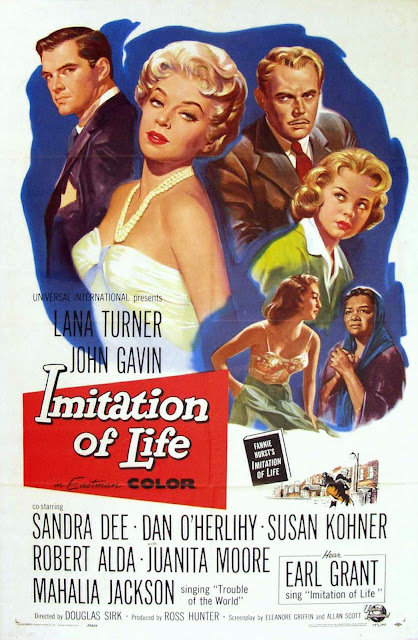 Another day, another iconic filmmaker I'm watching for the first time. This time around, it's Douglas Sirk, the master of melodrama whose works influenced countless directors over the last 60 years, including the one, the only Todd Haynes. The movie that served as my introduction to Douglas Sirk was his 1959 take on Imitation of Life. Like many older Hollywood movies tackling the topic of race that aren't directed by Oscar Micheaux, it has its fair share of cringeworthy moments, it fails to really grapple with racism as the systemic evil that it is and the casting of a white actress in the role of a mixed-race person of color really is bad, especially since the earlier 1934 version actually managed to land non-white performer for the part.


Though it might sound like a joke to follow up all those critiques with something positive, I do genuinely mean it when I say that Imitation of Life is, aside from those undeniably massive aforementioned roadblocks, is actually a pretty solid movie. Based on the 1933 Fannie Hearst novel of the same name (though drastically changing the character names), Douglas Sirk's take on Imitation of Life (working from a script by Eleanore Griffin and Alan Scott) follows aspiring actress Lora Meredith (Lana Turner) developing a friendship with Annie Johnson (Juanita Moore). Both have young daughters, with Lora having Susie (Sandra Dee) and Annie having Sarah Jane (Susan Kohner).

While Lora and Susie have a predominately fine relationship, Annie and Sarah Jane have a far more fractured relationship given that Sarah Jane is white-passing and she doesn't like her Mother serving as a reminder to everybody that she's really Black. Whereas the 1934 take on Imitation of Life shoved this subplot about a mixed-race woman's struggle with her identity to the background, this 1959 take on the same material very much makes that plotline the focus of much of the proceedings. While Imitation of Life doesn't exactly get points for the most contemplative take on the experiences of a person of a white-passing person of color, it does at least get entertaining melodrama out of this material.

There isn't a high-wire dramatic scenario in Imitation of Life that isn't written, filmed and especially performed to achieve maximum over-the-top melodrama. If someone has to yell, they're going to bellow to the heavens. if they're going to cry, they better loudly sob until their tear ducts are empty. The creative freedoms afforded by this uniquely stylized aesthetic result in Griffin and Scott penning some deliciously heightened dialogue, like a slimy theater producer commenting that his book of morals is always up for a rewrite. Their script similarly embraces moments of dialogue-free absurdity, like Sarah Jane emerging from her bed with her high heels already firmly planted on her feet.

If the screenplay for Imitation of Life runs wild with Douglas Sirk's melodramatic tendencies, then the cast practically runs rampant with that quality of his filmmaking style. I especially love Sandra Dee just embodying an "Aw shucks!" attitude that's always entertaining on its own merits but proves to be especially humorous when juxtaposed against Susan Kohner's consistently intense performance as Sarah Jane. Kohner's Susan Jane is dealing with so many weighty issues tied into her identity and societal expectations of who she is and meanwhile Dee's Susie is in such a state of constant naivety, her biggest worry is making sure she rides horses with family friend Steve Archer (John Gavin) enough. It's like the two characters, and their respective performances, hail from different planets!

The performances in Douglas Sirk's Imitation of Life are memorable but the production design in this project is truly unforgettable. Bright colors abound in any given frame, especially within the lavish Meredith household. Heck, even a "seedy" cabaret Sarah Jane briefly works at is laced with vibrant shades of yellow and blue that make it look like a setting straight out of a Gene Kelly musical. Kirk's steady camerawork and carefully-composed blocking ensure that it isn't just all that pretty eye candy in the production design that captures your eye in the frame. There's truly impressive filmmaking going on here to bring to life the over-the-top melodrama that makes this 1959 take on Imitation of Life such a boldly drawn piece of entertainment.
Posted by Douglas Laman (NerdInTheBasement) at 2:44 PM