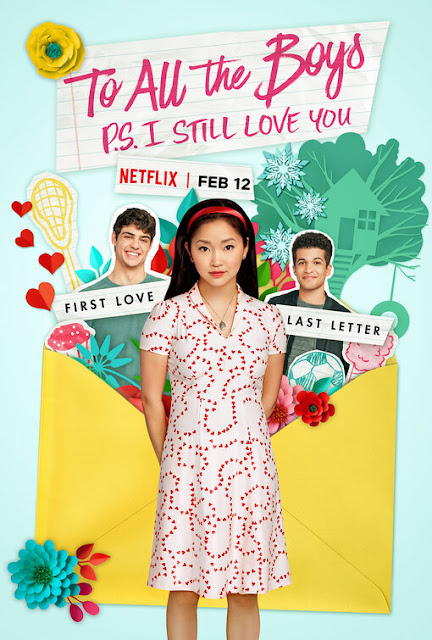 It is a dark time for Sara Jean (Lana Condor). Although her fears over her love letters being released has been destroyed, anxiety over being enough of a “proper” girlfriend for her new boyfriend, Peter (Noah Centenio), have driven Sarah Jean to contemplate what could have been with former crush John Ambrose (Jordan Fisher). Evading the dreaded interactions with Peter, Sarah Jean has established a new volunteer opportunity in a local nursing home that reunites her with a teenage version of John Ambrose. The uncertain Sara Jean, obsessed with finding a perfect romance, has dispatched thousands of conversations to Ambrose to figure out if he, not Peter, is her true love...

To All The Boys: P.S. I Still Love You, the sequel to the 2018 sleeper hit To All The Boys I Loved Before, delivers the same kind of super-sweet romance that made the original film so widely beloved. Though there are a handful of dialogue references to the characters being savvy to the tropes of classic romantic comedy movies, 2 All The 2 Boys is very much a traditional take on a romantic-drama rather than a deconstruction or tweaking of the genre.

That doesn’t make for exceedingly memorable cinema but it also makes for a pleasant 100 minutes and one that’ll totally satisfy the existing fanbase. If there is a major hindrance to the proceedings, it’s that too often comedy hinging on dialogue falls flatter than they should. P.S. I Still Love You comes off far more comfortable doing broad romantic drama than it does engaging in broad dialogue-based comedy. This is especially true of the assortment of quips given to Sara Jean’s sister, which tend to be the worst kind of savvy kid sidekick humor. Similarly lackluster in the script by Sofia Alvarez and J. Miles Goodloe is how its cast tends to be on the overstuffed side of things.

This is especially true of a whole subplot concerning Sara Jean’s Father‘s romantic infatuation with a neighbor that ends up being extraneous to the proceedings. On the other hand, that same script does manage to come up with a number of effectively moving moments, the most important ingredient in any romantic drama. The best of these also turns out to be one of the most enjoyably unexpected aspects of the film and concerns a touching resolution to a rivalry between Sara Jean and the antagonistic Gen (Emilija Baranac). I truly didn’t see these two’s dynamic going in such an empathetic direction and that’s the kind of hopeful heartfelt material that defines the best moments of this series.

This sequence ends with a bit of well-executed camerawork that reinforces the solid visual sensibilities of this entry in the To All The Boys saga. Director Michael Fimognari decides to differentiate his filmmaking style from the first movie’s filmmaking by relying heavier on extended single-takes as well as quasi-Wes Anderson-esque shots where the camera quietly follows characters around a shot from a profile perspective. The result is a handsome-looking production that reinforces how, this being a buzzy sequel and all rather than a low-budget original title, Fimognari and company are working with a much larger canvas than your average YA-romance novel adaptation.


It’d have been awesome to see such a canvas be applied to a more unique approach to the romantic-drama, I Still Love You’s tendency to rely heavily on formula does tend to undercut what are supposed to be its most poignant romantic moments. But overall it remains a pleasant enough affair, especially since Lana Condor remains as endearing as ever. The greatest blessing these To All The Boys movies ever delivered was giving Condor a well-deserved opportunity do flourish as a lead performer, she’s so engaging and entertaining in her newest turn as Sara Jean.
Posted by Douglas Laman (NerdInTheBasement) at 5:30 PM