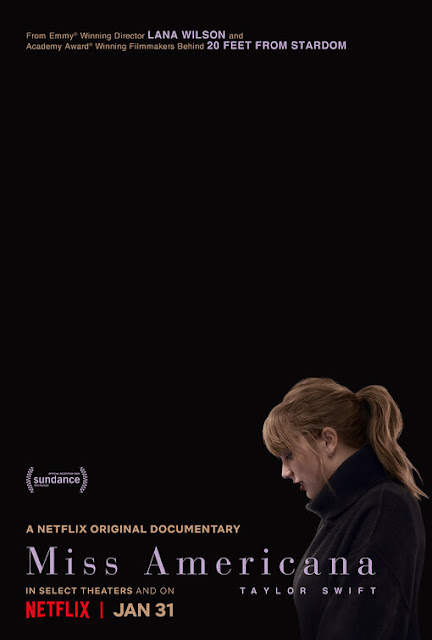 I've been on the Taylor Swift bandwagon from the get-go. As a country music obsessed youngster, I distinctly remember that point in 2006 where Swift's initial singles like Tim McGraw and Teardrops On My Guitar were omnipresent. In a country music scene dominated by Toby Keith and Trace Adkins machismo, Swift's tunes offered something very much different from the pack. They were unabashedly from the perspective of a woman and tended to emphasize an openly vulnerable perspective, two elements lacking in the country music scenes of the 2000s. Swift's ability to tap into distinct points-of-view helped to ensure that she was no one-hit-wonder, she's still delivering hit songs in the year 2020.


Her career gets chronicled in the documentary Miss Americana. Hailing from director Lana Wilson, this feature explores the woman behind some of the biggest songs of the modern era. We follow Swift from her start as a country music superstar to someone transitioning into the pop music scene and then into the modern era. That present-day part of her career sees Swift's music continuing to evolve while she herself, in the wake of all the chaos in modern-day American politics, eschews her traditionally non-political persona to transform into a more politically active figure. Swift was once afraid of saying anything that could put off her online followers, but over the course of Miss Americana, we watch her become somebody who lives more for herself than her fans.

Put another way, the intended theme meant to unite everything is the idea of Taylor Swift going from being a passive figure in her life to a more proactive individual. That's an intriguing arc to serve as the center of a documentary about a famous singer but Miss Americana struggles to bring everything together in a cohesive manner. This is mostly because Miss Americana could, like a rabbit on Red Bull, stand to slow things down a tad. Miss Americana moves far too fast to make the gradual evolution of its central subject feel as impactful as it should. Editing that moves through crucial events in Swift's life in a rapid-fire manner ensures that Miss Americana, whether intentional or not, keeps conveying the idea that just knowing what events happened is what's important rather than how those events impacted Taylor Swift herself.

Hopping from a collection of pivotal 2009 events to Swift in 2012 without pausing for breath lends a hurried pace to the proceeds that end up making Miss Americana feel like a YouTube compilation of significant Taylor Swift events. The rushed pacing also hinders attempts to provide greater thematic connective tissue to the individual events in Swift's life. An eventual reveal that these are all supposed to be thematically interlinked to the overall character arc of Swift becoming a more independent human being ends up falling far flatter than it should. Spending more time on exploring Swift's perspective rather than just packing in as many big events as possible would have helped Miss Americana's handling of Swift's eventual growth immensely.

Running only 87 minutes long with credits, there could have been plenty of time for more introspection rather than dedicating so much of Miss Americana to running down famous Taylor Swift events in an obligatory fashion. Having said all, that isn't to say this documentary is devoid of compelling material. On the contrary, there are a fair number of noteworthy scenes to be found here, particularly the ones that take the time to hit the pause button and let viewers stick around with key events in Swift's life for prolonged periods of time. These slower-paced portions of Miss Americana tend to be accompanied by narration from Swift that shows a level of admirable thoughtfulness from the famous singer.

Moments like Swift recalling how confused she was about who the audience was booing at during that infamous 2009 MTV Music Video Awards boondoggle is an extremely insightful & intimate examination of this particular real-world event. Swift isn't even on-screen when she's recounting this story yet you can feel how much it still torments her a decade later. On a lighter note, a scene that cuts between Swift planning out a music video for her song Me! and the filming of that music video isn't just a showcase for strong editing (thank a team of five editors for that!) but also a visually creative way of demonstrating Taylor Swift's creative process. These are the kinds of thought-provoking material that get inside Swift's head that define the best moments of Miss Americana, a documentary plagued by far too much surface-level material.
Posted by Douglas Laman (NerdInTheBasement) at 10:17 AM