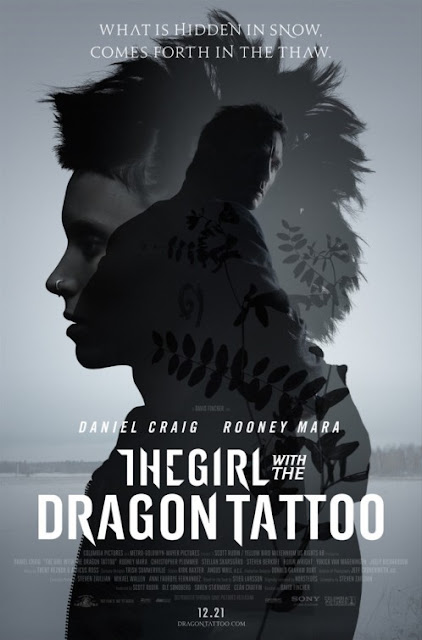 For a hot moment there, the Girl With the Dragon Tattoo books became the kind of worldwide literary sensation that you rarely see Swedish literature transform into. A little over a decade after the books reached their peak popularity, they've receded into the pop culture background more than a tad, but there was a period where Steig Larson's series of novels about hacker Lisbeth Salander were the new Da Vinci Code in becoming a modern adult book series reaching the kind of ubiquity and fame usually reserved for younger-skewing YA-titles. Such popularity meant that it was inevitable an American film adaptation would arrive.


Such an adaptation arrived in December 2011 in the form of The Girl with the Dragon Tattoo. David Fincher, no stranger to acclaimed murder mysteries after helming Se7en and Zodiac, was in the director's chair on a movie that was eyeballed to spawn a trilogy. The leads of the piece are the aforementioned Lisbeth Salander (here portrayed by Rooney Mara in her breakthrough acting role) and Mikael Blomkvist (Daniel Craig). The former character is a young hacker who's trying to secure her own independence while dealing with her lack of ready finances and overbearing government authorities keeping track of her behavior after she was previously arrested.

Meanwhile, Blomkvist is a disgraced journalist whose attempts to bring down a corrupt rich guy have only seen him get egg on his face. The prospect of doing investigative work for Henrik Vagner (Christopher Plummer) in a secluded island village suddenly sounds more appealing than ever. It's a job fixated on Vagner's missing grandniece and one that sees's Blomkvist reaching out to Salander for help. The duo spend the first half of the story separated as they navigate their own struggles. Once they're united, plenty of entertainment is to be had at the whodunit that transpires, especially since director David Fincher knows how to execute the proceedings with such assured craftsmanship without forgetting to indulge in some requisite entertainment. Just because a film is solidly put-together doesn't mean it can't have time for fun flourishes like a killer playing Enya's Orinoco Flow while he tortures Blomkvist.

Steven Zaillian's script is a fine piece of work that makes sure the 158-minute runtime is put to good use in letting us get to know the two lead characters as well as in supplying a steady dose of intense suspense sequences. If there is a flaw in the writing, though, it's that I wish Blomkvist had more of a direct thematic connection to the killings. A case involving a woman going missing in the midst of a bunch of men who have toxic attitudes towards women being something that attracts Salander, herself someone who has to grapple with such men on a daily basis, makes total sense. But how does the case thematically tie into Blomkvist's own perspective? Aside from Blomkvist occupying spaces in the story (like the damsel-in-distress role) usually reserved for women, his presence in The Girl with the Dragon Tattoo doesn't enhance the thematic undercurrent of the story to a pronounced degree.

Still, it's always fun to see Daniel Craig (sadly not sporting a Southern accent here) in movies and he makes for a great restrained counterpart to Lisabeth Salander. Plus, at one point he gives a kitty a high-five and that alone might justify the character's presence in the proceedings. However, the standout among the lead performances, and the entire cast even, is Rooney Mara. Bursting onto the leading lady scene with all the conviction in the world, Mara shows up in her first scene with a facial expression that just screams how little she cares what others think about her. Society already judges her from one glance so why shouldn't Lisabeth, as she does in this introductory sequence, just discard giving a hoot what people think about her?

Mara's expertly-executed dialogue deliveries excellently capture this crucial aspect of Salander's personality and is just one of the many standout elements of Mara's captivating performance that makes Salander such a relentlessly entertaining hacker hero. Mara and Craig are inhabiting fimmaking that makes use of the green color grading David Fincher would later employ on Gone Girl. Sometimes those green hues are a touch intrusive but that's one of the few visual hiccups in what's otherwise an extremely well-directed production. The Girl with the Dragon Tattoo isn't as innovative as the best David Fincher movies but since it's a Fincher feature that isn't Benjamin Button, it's still a well-made movie with a lead turn from Rooney Mara that's truly out of this world.
Posted by Douglas Laman (NerdInTheBasement) at 9:05 PM