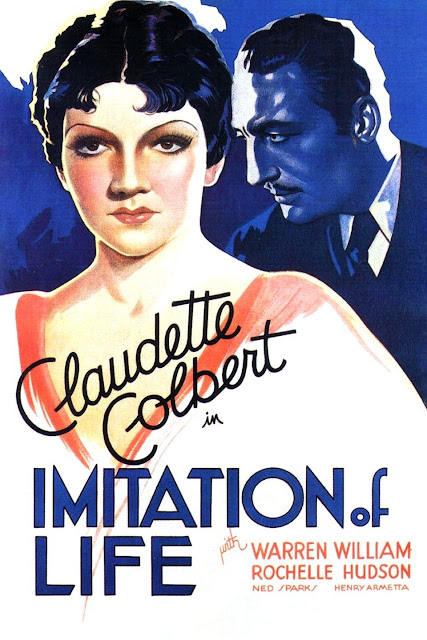 The 1934 take on Imitation of Life reminds me of nothing so much as The Love Guru. Both are movies trying to make these big bold sweeping statements, with Imitation of Life trying to impart wisdom on race and Love Guru attempting to meditate on who has control of our happiness. However, both get heavily sidetracked by digressions into humor that’s like nails on a chalkboard. Just as elephants having sex on a hockey rink derails The Love Guru, so too do endless gags about the term Ichythology undercut Imitation of Life.

Beatrice Pullman (Claudette Colbert) is struggling to juggle everything as a single mother whose also trying to carry on her late husband’s maple syrup business. She could really use some help and such aid arrives in the form of Delilah Johnson (Louise Beavers). Arriving in tow with her mixed-Race daughter Peola (Fredi Washington), Delilah starts out as a houseworker but soon becomes a dear friend of Beatrice and the source of inspiration for a lucrative pancake business based on Delilah’s own family recipe.

While this friendship is blossoming, Peola is dealing with her own issues stemming from her skin color. Peola can pass as a white person and wants to be seen as white, to the point that she wants to disown her Mother, a figure who reminds her of her actual ethnicity. What a fascinating mindset to explore, one rich with compelling dramatic possibilities. Unfortunately, such possibilities go untapped here in this particular take on Imitation of Life. This John M. Stahl has far more pressing matters on its mind. Specifically, Imitation of Life ends up becoming really enamored with a love triangle between Beatrice, her daughter Jessie Pullman (Rochelle Hudson) and Ichythologist Steven Archer (Warren William).

Wacky hijinks surrounding the pronunciation of Ichythologist and the fact that Beatrice & Jessie are attracted to the same dude hog up the spotlight while the far more interesting storyline concerning Peola gathers dust in the corner. Scenes centered on Peola’s plight are just so much more interesting than the rest of the movie. Why isn’t this specific perspective the center of the movie? Even after Peola’s Mother dies in the climax, resulting in a scene where Peola breaks down into tears over Delilah’s coffin, Imitation of Life can’t help but shift focus immediately away from her and back to Beatrice’s wacky love woes. The fact that Steven Archer and Jessie Pullman aren’t all that interesting of characters only compounds the problems inherently baked into the storyline concerning a doomed romantic triad.

Aside from the adversely lopsided screenwriting, Imitation of Life does have some benefits Such virtues include subtle visuals choices, like camera placement, that nicely reinforce how Beatrice is constantly trapped in American society. Claudette Colbert also radiates classic movie star charisma in the lead role while Louise Beavers manages to incorporate flashes of thoughtful acting into a role that frequently doesn’t give her much to do. Also gotta give props to Ned Sparks as Elmer Smith, whose performance renders this character as a figure from another planet. With the voice of David Lynch and a constant stiff demeanor, Sparks proves to be highly unorthodox but entertainingly so. If only Imitation of Life’s story structure reminded one of that delightful Ned Sparks performance rather than the distracted writing of The Love Guru. Maybe then Imitation of Life could have been enjoyable to watch even when it wasn’t fulfilling all of its narrative potential.
Posted by Douglas Laman (NerdInTheBasement) at 4:33 PM