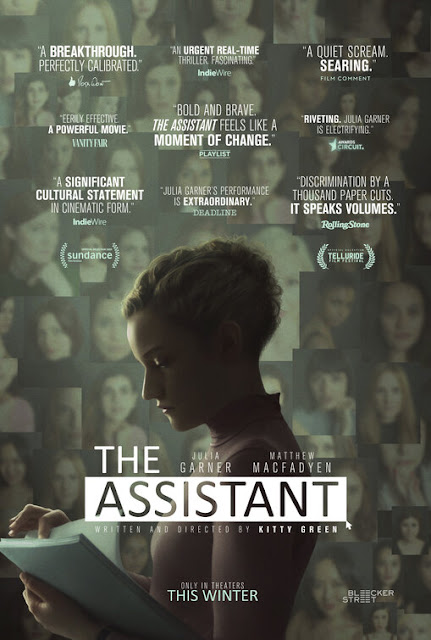 We begin The Assistant with the life of Jane (Julia Garner) already in progress. Rather than starting out with her being interviewed for the titular job, writer/director Kitty Green begins her screenplay with Jane already having spent a few weeks in the position of being an assistant to an unnamed and unseen movie studio executive. It's an occupation where she's gotta do an assortment of odd jobs, like cleaning up his office, arranging screenings, handling the executives' wife and turning a blind eye to the seedy behavior happening around her. The man she works for isn't just creating a toxic workplace with his verbally abusive behavior but also clearly engaging in acts of sexual harassment and assault with a variety of women in the film industry.


In one of Green's distinct choices for telling this story, the repulsive behavior committed by this executive remains as unseen as the executive himself. Through seeing Jane cleaning up the office of her boss when he isn't around or off-hand jokes by male executives, we totally understand what's going on. The power of suggestion is used to convey the creepy actions that are considered normal in this workplace and keeping so much related to this hideous figure concealed is a smart decision for a number of reasons. Chief among them is the same reason it was brilliant of Dr. Seuss to keep the Once-ler concealed in the original Lorax book. In both cases, the audience can't excuse despicable actions as simply the work of one specific human being.

Though telling its story in the film industry to comment on folks like Harvey Weinstein, Kitty Green's screenplay keeps things vaguely-defined enough to communicate to the viewer that the repulsive behavior happening around the lead character of The Assistant could come from anywhere and anyone. To boot, keeping these parts of The Assistant off-screen also ensures that we get to know characters like Jane or new assistant Sienna (Kristine Frosteth) as people on their own terms rather than seeing them exclusively in the context of interacting with the toxic executive they work with. The Assistant refuses to give powerful predators any more time in the spotlight but that doesn't mean the consequences of their actions aren't felt in this production.

On the contrary, Green impressively communicates in subtle terms what it's like inside Jane's head on a daily basis as she navigates this workplace. A critical way this is accomplished is through outstanding sound work, which makes every bump, scrape or other noises in this workspace sound as devastating as an asteroid crashing into Earth. Just the sound of a metal tissue box being pushed across a table is rendered with such fierceness as a way of reflecting how overwhelmingly intimidating this environment is for Jane. Everything around her, even objects making mundane noises, is intimidating, as reflected by the exquisite sound work.

Another clever way The Assistant makes Jane's specific perspective quietly but vividly realized is through director Kitty Green's sense of blocking, which sees Jane rarely being the central focus of a shot. Typically, she's lurking to the side of the break room while two other characters talk about a personal matter or she's crowded around by two of her male co-workers who want to dictate every word of her e-mail. This staging never calls attention to itself but it effectively communicates how Jane is seen as just a fly-on-the-wall by her co-workers and even by herself. Through this visual choice, The Assistant subtly depicts how people who could stand up to corrupt power are ground down into just being complicit passerby's.  After all, as a revolting HR employee tells Jane at one point, who would listen to somebody like Jane?

I've seen comparisons drawn between The Assistant and Jeanne Dielman, 23 Commerce Quay 1080 Brussels and that does feel like an apt comparison. After all, both are well-rendered explorations of specifically female perspectives that use quiet filmmaking to insightfully explore psyches being word down by daily drudgery. However, The Assistant isn't just a rerun of that Chantal Akerman masterpiece, it's also a well-done feature in its own right. Kitty Green's inaugural foray into non-documentary directing is a truly impressive one, especially when it comes to its sound work, blocking and an understated lead performance from Julia Green that captures the perspective of The Assistant's protagonist magnificently.
Posted by Douglas Laman (NerdInTheBasement) at 2:37 PM