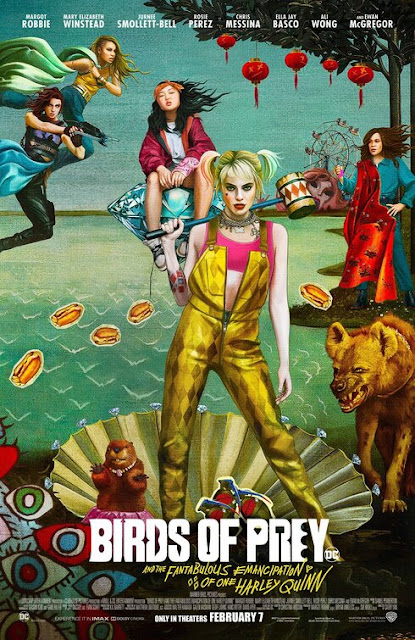 Gosh, it's always tough to grapple with a break-up. But it's especially difficult when the spouse you're breaking up with is The Joker. That's the situation Harley Quinn (Margot Robbie) finds herself in now that the Clown Prince of Crime has dumped her, presumably to spend more time focusing on stair dancing. Harley's spent so much of the last few years dedicating herself exclusively to her puddin' that she's never been able to establish herself as her own independent person. Figuring out who she is apart from The Joker will be difficult now that tons of Gotham gangsters, no longer worried about incurring the wrath of Mr. J, are out to settle some scores with Harley, with one such gangster is Black Mask (Ewan McGregor).


Harley's tale eventually intersects with the ongoing sagas of four other women in Gotham City, specifically singer/driver Black Canary (Jurnee Smollett-Bell), teenage pickpocket Cassandra Cain (Ella Jay Basco), Gotham City Police Department detective Renee Montoya (Rosie Perez) and a mysterious lady armed with a crossbow (Mary Elizabeth Winstead). Birds of Prey interweaves all these assorted characters through non-linear digressions. Screenwriter Christina Hodson employs Harley Quinn as a wacky narrator who keeps taking the viewer back and forth across time to properly explain who everyone is and what their motivations are.

Birds of Prey deserves props for utilizing a storytelling approach that owes more to Kuzco in The Emperor's New Groove than the story structure of, say, Suicide Squad but the execution does leave something to be desired. The stop-start nature of the plot has its amusing moment but too often undercuts dramatic momentum. Another aspect of the script, Harley's narration, similarly has a mixed rate of success. While it yields its fair share of successful jokes, it's sometimes used to accentuate on-screen actions (chiefly a scene where Renee Montoya's conflict with her boss reaches a head) that really could have been communicated just fine with on-screen visuals. Sometimes Birds of Prey hits the good version of beating you over the head with something but then the on-the-nose narration has a habit of hitting the bad version of that element.

On the other more positive hand, one of the best parts of Hodson's writing is how well it works at creating distinct personalities for the five lead characters. They're all distinctly rendered with outsized personalities that prove to be delightful to watch interact with one another, particularly in regards to their rapport with such a firecracker like Harley Quinn. All the lead characters are really enjoyable but I especially adored Winstead's assassin character whose capable of firing away arrows into the throats of evildoers but who also tends to be socially awkward. That's a juxtaposition Birds of Prey uses for both memorable comedy and some equally entertaining action as well as a microcosm of one of the absolute best parts of the entire project.

Specifically, the personality of Huntress represents how Birds of Prey isn't afraid to go big rather than going home. This is a movie bursting with its own unique flavor of anarchic energy that's like a mixture of a Guy Ritchie movie and a particularly hyperactive Bugs Bunny cartoon. Some movies might choose between bright colors and violence but Birds of Prey decides to drench the screen in bright color and confetti all while dabbling in carnage that veers from being reminiscent of John Wick to being reminiscent of what you'd see in your average Hostel film. It all makes for a blast of a time, especially since Birds of Prey comes up with some truly impressive action set pieces for Harley and the other lead characters to inhabit.

There's a welcome sense of variety to the backdrops in Birds of Prey, under the superb direction of filmmaker Cathy Yan, the film's visual sensibilities are just as unexpected as the behavior of its protagonist. Did you ever think you'd see a hand-to-hand tussle with all the graceful movements of water ballet set in a police station? What about a duel between the five lead characters and physical manifestations of toxic masculinity set within a circus seemingly designed by F.W. Murnau? The sets in Birds of Prey truly are remarkable to soak in, they're riddled with color & finer details (Harley's apartment is rife with amusing sight gags). Plus, it's awesome how these sets are less concerned with adhering to gritty realism than they are with serving as physical extensions of the mindset of Harley Quinn.

When Harley's in a jubilant mood, the sets she inhabits tend to have a warm quality to them But when she's in danger, the production design of Birds of Prey uses minimal lighting and even begins to take some visual cues from film noir to communicate how internally she's in turmoil even if she's still cracking wise on the outside. Such a fascinating feature of the excellent production design reflects how Birds of Prey doesn't forget to be weighty even in the middle of this zany mayhem. Comical graphic violence abounds in Birds of Prey but so does the contemplation of the varying ways women endure in the face of systemically-ingrained misogyny. Renne, for instance, is trying in vain to prove herself to fellow male police officers who steal credit for all her cases while Black Canary is trying to square her own personal moral code while simultaneously working for Black Mask. When figures like Black Mask control all the power and influence in society, where can the marginalized turn to for personal fulfillment and justice?

Such a thought process means the main baddie Black Mask is constantly shown to be white male privilege incarnate, a vain man who sees women as just objects he can use as objects and/or vessels to vent his frustrations at. The fact that evil characters in Birds of Prey are coded as antagonistic by the way they infantilize and/or dehumanize women only furthers the project's thoughtful approach to exploring this perspective. Oh, and it manages to effectively explore such weighty material all while having a sense of deliriously fun pandemonium including a hysterical running gag involving a delicious-looking breakfast sandwich and an extended sequence where Harley Quinn beats up dudes with a baseball bat while rolling around on roller-skates. Much like last year's DC Comics movie Shazam, Birds of Prey is surprisingly thoughtful, not afraid to get endearingly weird and also a total blast to watch. Any movie like Birds of Prey that ends with a needle-drop of Kesha's Woman gets a hearty recommendation from me!
Posted by Douglas Laman (NerdInTheBasement) at 11:49 AM