Patrick Rarely Rivets But It's Also Rarely Worse Than Harmless. Plus, It's Got a Cute Pug! 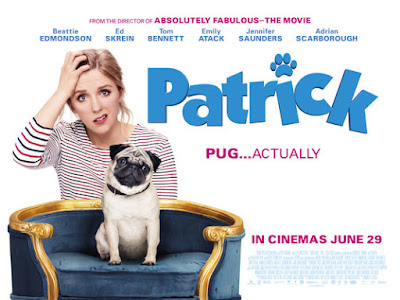 I love all dogs in general (I don't know if you've heard, but dogs are good, Brent), but there's no question that pugs are my absolute favorite breed of pooches on the planet. More movies really should take the time to make sure their stories heavily involve this specific breed of doggo, can you imagine how much more tolerable, say, Bohemian Rhapsody would have been if it had given Freddie Mercury an adorable pug sidekick? This means Patrick, a new family movie from director Mandie Fletcher, was starting off on the right foot (paw?) with me by fixating its entire plot on a pug by the name of Patrick.


Patrick is a rambunctious pug who comes into possession of Sarah Francis (Beattie Edmondson) after his previous owner, Francis' grandmother, leaves her granddaughter this dog in her will. At first, Sarah, who already has to deal with a new job as a teacher, wants nothing to do with this dog that destroys everything at will and causes mayhem wherever he goes. But as they spend more time together, Patrick and Sarah begin to bond while Patrick helps Sarah out in her social and teaching experiences. There's also a B-plot involving Sarah running a marathon to help raise money for an elderly gentleman's scooter.

It is just as impossible to deny that Patrick is a flawed movie on a writing level as it is to claim that pugs are not adorably precious sweetums. Among the issues in the script, penned by Mandie Fletcher, Vanessa Davies and Paul de Vos, is how it goes through the motions in depicting how Sarah and Patrick go from barely standing one another to being inseparable. An even bigger problem relates to certain parts of the story either sputter out (like a subplot related to Sarah's neighbor and her eviction worries) or don't feel like they've been properly developed enough. That latter issue is especially discernible in the plotline revolving around Sarah preparing for and running a marathon.

What's supposed to be one of the most important parts of the story keeps feeling like an afterthought in the script, making the fact that it serves as the entire grand finale of the plot all the more puzzling. Couldn't something more tied to canines or at least more directly associated with the character of Sarah be chosen as the setting for the climax? That having been said, the script, though messy, is at least affable enough, thankfully avoiding the typical sources for grating family movie humor like gratuitous slapstick or abrasive yelling in favor of just juxtaposing Sarah's personality with the presence of this chaotic pug. Rarely is Patrick hysterical but also rarely do its jokes just die on arrival. For better and for worse, much of the humor in Patrick is simply pleasantly amusing.

Also in the movies favor is that it doesn't run too long, always a plus for family fare, and it smartly realizes how its best asset is just the titular pug character. Instead of devoting most of the screentime to forgettable human-based storylines, Patrick smartly gets the lions share of attention in the film's runtime. If you're gonna make a movie about a pug, you might as well actually make that movie about the pug, hooray for that. Another welcome surprise is that director Maddie Fletcher, despite working in the live-action dog family movie subgenre that typically sees filmmakers on autopilot, shows decent chops in her directorial work. Her directing is especially helpful in accentuating the humor of certain visual-based gags as well as in helping to maintain an agreeable tone for the motion picture.

Patrick may be formulaic as all he*k, but Maddie Fletcher at least realizes formulaic tendencies are more tolerable when filtered through a pleasant atmosphere. Such an atmosphere is carried over by the lead performance of Beattie Edmondson, who, thankfully, manages to bring some grace and subdued pieces of humor to a part that sees her default mode consisting of her reacting wildly to the shenanigans of her pet pug. Also amusing to see Ed Skrein here playing possibly the nicest individual he's gotten to play in a movie so far? That's cool to see. Patrick doesn't really have much up its sleeve beyond the presence of a cute pug so I'm doubtful anyone besides pug devotees will find much of value in here. Still, it's a harmless way to spend 90 minutes and it's most definitely better than many other live-action dog family movies like the wretched Good Boy!
Posted by Douglas Laman (NerdInTheBasement) at 10:52 AM