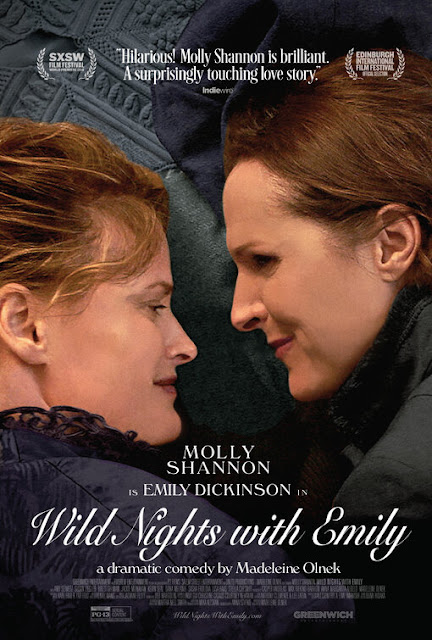 SPOILERS  FOR WILD NIGHTS WITH EMILY AHEAD

Last week, I did a double feature at my nearest arthouse theater that consisted of Little Woods and Wild Nights with Emily, the latter being a feature chronicling under-discussed parts of Emily Dickinson's life, including her romantic relationship with a woman named Susan. In between the two movies, I struck up a conversation with an employee of the theater who noted how there had been many instances of people walking out of Wild Nights with Emily because the overt presence of Lesbianism caught people off-guard (apparently, a similar problem plagued The Favourite at the same location months earlier). Apparently, people constantly tried to ask for their money back and complained that the movie was inaccurate because "[Lesbianism] didn't happen back then".


Me and this friendly movie theater employee both were befuddled by this response for numerous reasons, particularly given how factually inaccurate it was. Individuals residing in the LGBTQA+ community have always existed and it's especially astonishing moviegoers would say that when they're watching Wild Nights with Emily, which is all about reinforcing that queer individuals have always been around as well as the historical revisionism that's led to the retroactive erasure of period-era LGBTQA+ people. The myth about Lesbians only existing in the modern era isn't the only myth Wild Nights with Emily sets out to undercut, why, it's whole premise concerns following the life of Emily Dickinson (Molly Shannon) and showing how she was the complete opposite of the anti-social shut-in stereotype history has frequently reduced her to.


Dickinson was far more outgoing than that, she was a person who gave bread to local children, who tried her hardest to get her poems published wherever possible and who carried on a romantic relationship with childhood friend Susan (Susan Ziegler) for multiple decades. Her life is told through a framing device of Mabel Todd (Amy Seimetz) reading aloud a book of Dickinson's poetry to a large gathering of women. Todd and her husband have published all of this poetry after Emily Dickinson has passed on and in order to help sell these books, they've created a new more easily marketable personality for Dickinson that sees her as a troubled explicitly heterosexual woman who could never leave her room.

This means the various flashback sequences offer up visual truth regarding the life of Emily Dickinson's life to the viewer to serve as a bold contrast to the lies Mabel Todd and her husband told that ended up cementing the widespread perception of who Emily Dickinson really was. The actual reality of her life is told through a screenplay penned by Madeleine Olnek (who also directs this project) that frequently makes use of creative stylized flourishes that allow Wild Nights with Emily to feel different from typical 18th century period piece features. Such flourishes include a brief fantasy sequence depicting all of Dickinson's closest confidantes standing, fully clothed, in a pond or a recurring feature wherein on-screen text appears to accompany the reading of Dickinson's poetry.

Though there are occasional underwhelming aspects to the cinematography or direction of Wild Nights with Emily that do reflect the low-budget nature of the proceedings, this feature primarily demonstrates a welcome sense of creativity when it comes to its visuals. This is especially seen in how Olnek knows the comedic value of keeping a gag contained to a single shot. A moment like Susan's husband accidentally riding past Susan whilst on a horse-and-carriage date with a mistress wouldn't be as funny as it is if Olnek didn't choose to frame the moment in a single shot that sees Susan just standing there in the background as her husband wiggles around in embarrassment. Limiting the comedy to a single shot also benefits flashes of wacky humor that echo the kind of gags you might find in a David Wain movie. This type of humor is most notably seen when a man is depicted being put in a straightjacket and then dragged away all while he recites a piece of poetry.

Madeleine Olnek's got a good hand on how to execute the unique style of humor found throughout Wild Nights with Emily and her sterling direction also results in there being an abundance of noteworthy performances throughout the feature, particularly Molly Shannon in the lead role of Emily Dickinson. For her performance here, Shannon shows a remarkable ability to handle subdued pieces of comedy (her reaction to hearing Mabel boning a dude downstairs from her bedroom is priceless) while the convincing nature she lent to her poignant scenes in her similarly exceptional turn in Other People comes in handy here. That latter talent of hers is especially helpful in one of the most evocative sequences of the entire motion picture in which the recently deceased Dickinson exchanges poetry with another human being under the ground.

That particular scene is part of the final ten minutes of Wild Nights with Emily that ties up the whole proceedings in a bittersweet bow that puts the retroactive historical revisionism of Emily Dickinson into a greater historical context. This brilliant poet's actual personality, sexuality, and work were either altered or completely erased from history so that powerful members of more privileged communities could make some cash. It's already a shame that so many moviegoers walked out of Wild Nights with Emily given what a well-made movie it is, but it's especially disappointing since the films entire ending is dedicated to addressing how myths about LGBTQA+ people not existing in historical settings exist in the first place.
Posted by Douglas Laman (NerdInTheBasement) at 10:53 AM