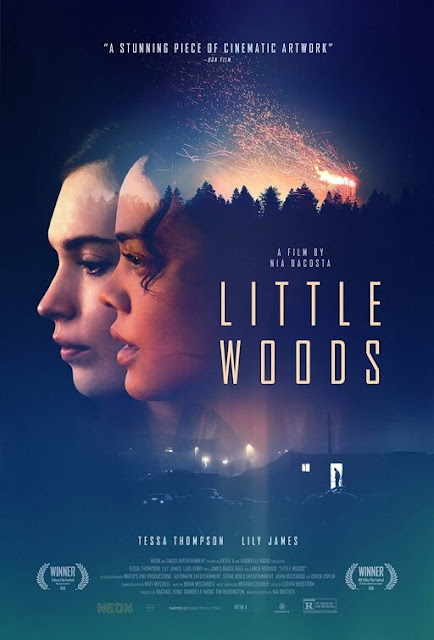 In North Dakota, Ollie (Tessa Thompson) is struggling to keep her life together. She's in the last few days of her probation, she's looking to get a new job in the town of Spokane after she got out of the drug dealing business and she's trying to help out her sister, Deb (Lily James), and her nephew whenever possible. That's a lot for cash-strapped Ollie to keep track of and now she's got the added issue of her house being foreclosed on. Needing to get at least three grand so that she can hold onto the house, Ollie reluctantly decides to get back into the business of selling medication to the local townsfolk again while Deb grapples with suddenly discovering that she's pregnant.

This is the basic story outline for Little Woods, a film that follows in the footsteps of modern-day movies like 99 Homes or The Florida Project in being an unflinching look at a person surviving with modern-day financial hardships. Just like those two aforementioned movies, Little Woods also treats its characters as complex human beings rather than caricatures. In the hands of writer/director Nia DaCosta, Ollie and Deb are portrayed as people whose every action, no matter how morally complex (like turning to drug dealing) has a clearly understandable motivation behind it. These two characters are trapped in a life that's basically a labyrinthine maze, one that constantly leads them to dead ends thanks to a lack of options when it comes to so many necessities like finances, housing or health care. They're just looking to get further and further through this ceaseless maze of misery while taking care of the people they love and that helps lend weight to both their plight and how they plan to try and evade it.

DaCosta's script goes in the unexpected but brilliant direction of using the fully-realized motivations of these characters to make the story an under-the-surface thriller. Rarely in Little Woods are people pointing guns at each other or threatening to blow off bombs, but plenty of tension still emerges because of how the audience recognizes just how much is at stake for Ollie and Deb at every turn in the story. One false move or getting caught by the cops could be the gust of wind that sends the stack of cards that is their lives crumbling to the ground. This means that Little Woods has numerous scenes, like Ollie getting an impromptu visit from her parole officer or Deb handing over a medical card to a receptionist, that play out in the performances of the assorted actors like they're mundane sequences, but the underlying character motivations and stakes tied to Ollie and Debs circumstances ensure that these scenes are drenched in harrowing tension.

One will be constantly holding their breath in anticipation throughout so many masterfully intense scenes in Little Woods and those particular scenes help to give the feature a uniquely realized morose atmosphere visually reinforced by the cinematography by Matt Mitchell. Like so many classic film noirs, Mitchell's work here is especially adept at knowing how to use dark lighting to accentuate the mood of a given scene. There's a shot towards the end of the movie depicting Ollie and Deb sitting under some kind of outdoor light fixture at a motel while being surrounded by natural nighttime darkness that's just haunting on a visual level on its own merits while also beautifully capturing in a single image how the two characters are so outmatched by the world around them.

Brian McOmber's distinctive score is similarly a key factor in making the melancholy ambiance of Little Woods so richly realized. Taking a cue from the more rural setting of Little Woods, McOmber's compositions make use of string-based instruments like fiddles in the service of a collection of music that's utterly haunting. On one particular track named Little Woods, the instruments frequently create a noise that sounds like someone wailing. In this particular piece, as well as throughout the rest of McOmber's work in Little Woods, human anguish is communicated in a music form that's beautifully and chillingly. Brian McOmber's score helps make the captivatingly morose atmosphere of the overall feature all the more enthralling, a feat it shares with the two lead performances from Tessa Thompson and Lily James.

Though they've only recently started headlining movies, James and especially Thompson have been on a hot streak with their work as actors recently and they turn in some of their strongest work as performers yet with their lead turns in Little Woods. From the first time they interact, Thompson and James shared a chemistry that effortlessly suggests the decades of experiences these two characters have had as adopted siblings, we don't need flashback sequences to tell us that this duo have been through hell together, Thompson and James' rapport clearly communicates that on its own. In terms of their individual performances, James brings impressive complexity to the role of Deb, a type of character (single cash-strapped mother) who is often treated as just a caricature in far too many other movies.

As for Thompson, she brings a weary hopefulness to the character of Ollie that's utterly fascinating to watch. In the character of Ollie, we have a woman who maintains that she can come up with a plan to get out of any situation because, well, if she doesn't, what else is there? You've got to cling to something and that mixture of pragmaticism with a grounded version of optimism is something Thompson portrays brilliantly. Though portraying vastly different characters, both Thompson and James deliver performances in Little Woods that share the qualities of embracing complexity instead of running from it as well as knowing how to communicate so much in subtle terms. So many outside elements (poverty, family, job opportunities, etc.) inform the actions of these characters and Thompson and James both handle all of that exterior motivation with grace.

Of course, the way the characters in Little Woods can have such complex motivations without the movie becoming convoluted is an achievement that also stems from Nia DaCosta's screenplay which serves as an impressive first foray for her into the world of feature-film screenwriter. She's also making her debut as a feature film director with Little Woods, and like her writing, DaCosta's direction is immensely impressive, I especially love how she captures grimy everyday surroundings that the characters constantly find themselves in. The paint peeling off a wall, run-down buildings covered in rust, all of the little details of these environments are subtly captured under her direction and it's not the only time her directing style makes a point to focus on the tiniest of details in a scene. DaCosta cements herself as a filmmaker to watch out for (I'm so excited to see what she does with her next project, a Candyman remake/reboot) with Little Woods, a thriller bursting with haunting craftsmanship around every corner whether you're talking about the atmosphere, performances, cinematography, music or anything in between.
Posted by Douglas Laman (NerdInTheBasement) at 9:12 PM