Mrs. Miniver's Historical Bona Fides Are More Intriguing Than Its Own Characters 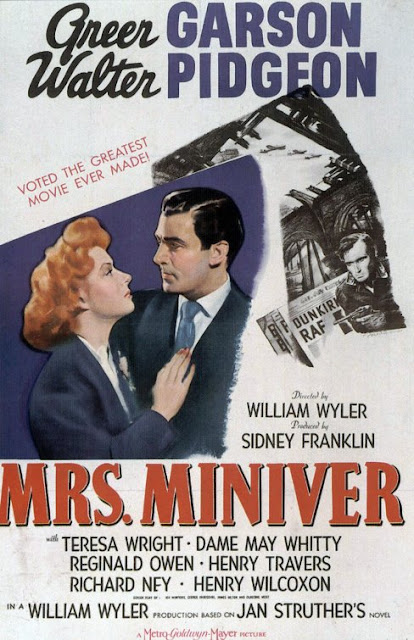 As the Turner Classic Movies pre-movie introduction helpfully clarifies, the historical context for Mrs. Miniver is utterly fascinating. This American financed movie set near London was released in the summer of 1942 but had been in production for well over two years beforehand. This meant the film was constantly being tinkered with, even after whole scenes were shot, to keep the movie relevant to what was going in this worldwide conflict. This likely resulted in a tumultuous process of filmmaking but it did manage to also result in a movie that resonated deeply with both general moviegoers and famous world leaders of the era.


Kay Miniver (Greer Garson) is a member of the Miniver family, a wealthy British clan living a comfortable life full of all the luxuries you can imagine. As Mrs. Miniver begins, they and their neighbors aren't affected in a profound manner by the ongoing turmoils in nearby European country Germany, to the point that radio news broadcasts related to the conflict stir up laughter from Miniver's neighbors rather than terror. There's a quaint naivety to these scenes, even people like Miniver's son, Vin (Richard Ney), who are aware of the suffering of less financially well-off citizens can't even begin to imagine the terrors that this war can create.

But soon they will indeed know as World War II eventually finds its way Miniver's neck of the woods and Mrs. Miniver follows Kay and her family trying to survive in this trying time of upheaval. Truth be told, Mrs. Miniver works better as a historical artifact than as a stand-alone feature-length drama, mostly because the individual members of the Miniver family just aren't all that interesting as characters. The two youngest kids, Toby and Judy, for instance, have little in the way of concrete personality, they instead are written as the classic versions of movie kids, precocious youngsters with cutesy lines to deliver and not much else. Basically, they're the opposite of the kind of proactive kid characters you'd find in a Shane Black movie.

The romance between Vin and Carol Beldon (Teresa Wright) is even harder to get dramatically invested in. Wright and Ney, despite their best efforts, just don't share all that much in the way of chemistry and the transition that sees them going from philosophical rivals to romantic partners feels like too abrupt of an about-face in its execution. Tragically, the lead character, Kay Miniver, also suffers from the scripts inability to really make these characters pop as fleshed-out human beings. Miniver is so constantly on the sidelines of her own movie, whether it's in the subplot about Vin and Carol's romance or a flower competition involving kindly stationmaster Mr. Ballard (Henry Travers), that she sometimes feels like a member of a Greek Chorus rather than a protagonist in a film proper.

Granted, it's clear that this is an intentional move to some degree, but plenty of movies, namely Roma, have managed to make their lead characters intentionally sidelined figures in their own narratives while still making those protagonists engaging figures. As a character piece, Mrs. Miniver didn't fire on all cylinders for me personally but as a historical artifact, it most certainly sticks the landing. The way the story depicts how World War II creeps more and more into the lives of the Miniver family, to the point that Kay Miniver has to deal with a German pilot in her own home, is especially effective, this expansive conflict is depicted as a kind of quicksand that none of the characters are capable of escaping from no matter how hard they try.

William Wyler directing this project is another element of the production that gets more interesting when looked at through a historical context given that Mrs. Miniver, a film about the early years of World War II, feels like a companion piece to his 1946 motion picture, The Best Years of our Lives, a tale about American soldiers coming back home in the wake of World War II wrapping up. A bittersweet climax that ends the proceedings with key characters dead and World War II still raging on yet leaving the audience with a sense of hope in the face of darkness is also a stirring creation even when divorced from its historical context. Mrs. Miniver worked better as a historical artifact than as a piece of stand-alone dramatic cinema for me but there are certainly far worse things to be than a historical artifact, particularly when it comes to such an important era in world history.
Posted by Douglas Laman (NerdInTheBasement) at 9:30 AM