Pokemon: Detective Pikachu Has A Messy Script But Lots of Delightful Pokemon Antics 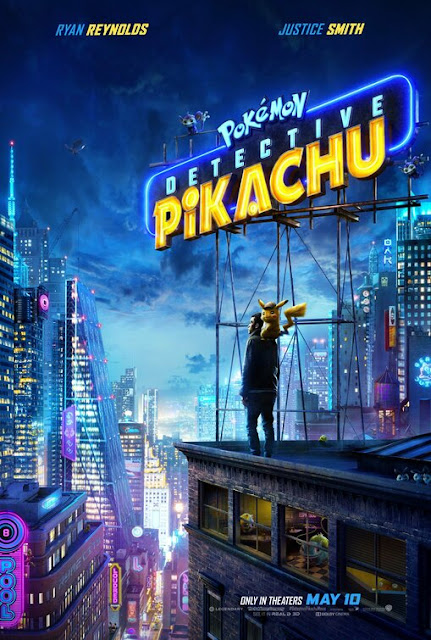 Pokemon: Detective Pikachu does not begin with the titular hat-wearing critter, rather it starts with  Tim Goodman (Justice Smith), a young twenty-something living out a mundane life working for an insurance firm in a small town. That quiet existence is upended when he gets news that his distant father has been killed. Tim heads off to Ryme City, a city Tim's dad lived in where humans and Pokemon live in harmony together, to simply say good-bye to his deceased pops, but those plans change when he discovers a talking Pikachu (voiced by Ryan Reynolds) in his dad's apartment, one that is convinced Tim's dad was embroiled in a larger conspiracy he and Tim now must solve.


This set-up leads into a movie that's usually quite delightful, even if the screenplay, credited to four writers that include the film's director, Rob Letterman, is oddly messy in a number of respects, including on a character level. This is especially true in regards to the character of Tim, a former Pokemon devotee who now carries daddy issues tied to a deceased mother. His past is gradually revealed over the course of the movie via flashback sequences that feel like they really should have come at the outset of the story so that the viewer could get a better understanding for what motivates the lead character. Imagine if you opened Guardians of the Galaxy without that prologue sequence to explain what kind of childhood tragedy shaped Peter Quill, that's kind of what Detective Pikachu goes for in the character of Tim.

It's also a shame that the script doesn't take full advantage of the neo-noir aesthetic it initially seems to be reveling in. The first half of Detective Pikachu especially finds plenty of humor in juxtaposing cutesy Pokemon with a grimy city straight out of a Raymond Chandler novel. Meanwhile, plenty of elements of the movie like the cinematography by John Mathieson (which makes great use of 35mm film), as well as a scene depicting Tim & Pikachu interrogating a Mr. Mime, are clearly looking to classic film noirs for inspiration. However, noir influences are disappointingly eschewed entirely by the time we get to the obligatory climax between the two lead characters and the primary villain that feels like a more generic mixture of the individual finales of The Amazing Spider-Man and Sky High rather than something you could plop Humphery Bogart into.

The finale of Detective Pikachu doesn't just feel detached from the rest of the feature on an atmospheric level, it also feels disappointingly removed from either of the character arcs Tim and Detective Pikachu have been going on previously. Though the climax of Detective Pikachu is emblematic of a number of the story problems that do hinder the overall film, this same screenplay does deliver plenty of fun in bringing Pokemon to the world of live-action feature-length storytelling. Pokemon shenanigans seem to be this scripts specialty and luckily there's enough of those to balance out the aforementioned story issues. The concept of having creatures like Squirtle or Charmander living side-by-side with humans results in plenty of fun sight gags and makes every frame set in Ryme City one packed with delightful background details.

Detective Pikachu as a character also turns out to be a delightfully determined creation, an endearing bundle of go-get-'em energy whose given an adorable character design by way of the exceptional visual effects used to bring all the Pokemon to life. Ryan Reynolds, despite initially seeming like a classic case of celebrity stunt casting, turns out to be a solid choice to play the part primarily thanks to just how humorous his vocal performance is. Reynolds has a keen sense of comedic timing that sees him delivering plenty of memorable lines throughout the runtime of the feature. Mixing together a great piece of character design work with a similarly well-done vocal performance means the titular protagonist of Detective Pikachu is an absolute delight.

It shouldn't be that much of a surprise that Detective Pikachu is such a winning character given how Pokemon-centric tendencies are where this movie excels the most. Detective Pikachu makes ample use of the creative opportunities afforded by setting a story in a world teeming with Pokemon. This means there are plenty of creatively constructed set pieces (executed under the solid direction of Rob Letterman) relying heavily on the unique nature of Pokemon that help set Detective Pikachu apart from other similar family features. On a more downbeat note, few of the human characters are as enjoyable as Pikachu or the other entertaining Pokemon we meet throughout the storyline and a few of these human characters, namely a detective played by acting legend Ken Watanabe, certainly feel like they could have used some more screentime to develop their personalities more or even at all.

At least they turn out to be better human companions to CGI creations than, say, the humans in the Michael Bay Transformers movies while lead human actor Justice Smith plays off his electricity-packed co-star in a natural manner. Remember how Bob Hoskins apparently almost had a breakdown trying to play off his animated co-stars in Who Framed Roger Rabbit and now every person who headlines a major movie, like Justice Smith, is expected to have that skill? My oh my how times change, as seen by how in 2019 one can release a live-action movie Pokemon movie about a crime-solving Pikachu that cost $150 million. Such a once-ridiculous proposition ends up resulting in a frequently entertaining, though messy, movie, one that ends up being the best directorial effort yet for Shark Tale helmer Rob Letterman. No Pokemon-themed renditions of Car Wash to be found here, alas.
Posted by Douglas Laman (NerdInTheBasement) at 11:45 AM