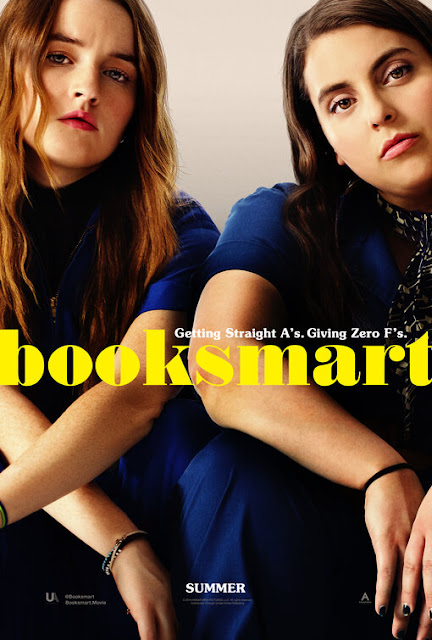 It's the last day of High School for Molly (Beanie Feldstein) and Amy (Kaitlyn Dever), long-time best buddies who have put their noses to the grindstone and spent all their time in High School studying in the hopes of getting into the best possible colleges. But on this day before graduation, Molly realizes that all the other kids in their school who spent so much time partying also managed to get into good colleges. There isn't much time left for them as high schoolers, so Molly and Amy decide to step outside of their respective comfort zones and go to a party for the first time. Sounds like a simple plan, but getting to that party is going to be far more of a trek than they could have ever imagined.

Booksmart is a total delight of a comedy, the kind of movie that's so good in so many ways that trying to type out its many virtues just makes me sound like a babbling fool (as if I don't already sound like that in my general writing!) Let me start the praise for Booksmart by saying how impressed I was with the work of director Olivia Wilde, who makes a mighty impressive feature film directorial debut here. Too many modern American comedies (looking at you Daddy's Home!) basically just look like CBS sitcoms in their direction, but like last years Game Night, Booksmart is a modern American comedy that realizes how important good directing is to a comedy feature.

Wilde's sharp directing is a boon to the comedy of Booksmart, so many of its best gags rely on the visual sensibilities of Wilde as a filmmaker. For example, a recurring gag of the supporting character Gigi (played with hilarious gusto by Billie Lourd, who I now decree has to be in all comedies) abruptly popping up in numerous different locations is enhanced by how and where Wilde's staging has Gigi making her surprise entrance from. This kind of intricate thought going into this recurring joke on a visual level ensures it's always a hoot whenever Lourd's character emerges seemingly from the ether. Such thought also serves as a terrific example of how Olivia Wilde's directing is critical to making the laughs of Booksmart so funny.

Her directorial choices also enhance pivotal moments of poignancy meant to make the friendship between Molly and Amy feel like a real friendship full of ups and downs. This is especially apparent in a crucial scene where the two leads engage in this argument and she captures it one extended shot, with the lack of breaks between shots allowing the tension of the confrontation to be truly felt. A subtle background detail of more and more people gradually pulling out their phones to film their argument is just the icing on the cake of the brilliant filming of this pivotal emotional sequence. There's so much careful detail in Olivia Wilde's directing in this poignant scene yet she's able to execute it so that, like the best computer visual effects, you don't even notice all the detail while watching the film. In this particular sequence, her subtle and brilliant directing allows your focus remains on the introduction of major conflict between the lead duo.

Said lead duo is brought to life through a script (penned by Emily Halpern, Sarah Haskins, Susanna Fogel and Katie Silberman) that's bursting at the seams with memorable characters. I mentioned in my review of The Edge of Seventeen how Hailee Steinfeld's lead character in that film impressed me because she didn't remind me of anyone I'd ever seen in a High School-based comedy. The same can be said for the two lead characters of Booksmart and the kind of distinctiveness that marks Molly and Amy begins to permeate the menagerie of delightful supporting players they run into throughout their night of attempted partying. Rampant uniqueness runs through this film's characters who all intentional broad archetypes before morphing into more detailed individuals. It's a constant delight to see what new angle Booksmart will reveal about its immensely enjoyable supporting players, even a seemingly dry principal character (played by Jason Sudeikis) ends up revealing extra comedic layers in one of the movies funniest scenes.

The idiosyncratic nature of Booksmarts characters is, like Olivia Wilde's consistently creative directing, a great example of how Booksmart refuses to go for the tired-and-true and instead finds outstanding comedy in the new and unexpected. That quality of this particular motion picture is exemplified by a gaggle of outstanding performances, the best of which come from Beanie Feldstein and Kaitlyn Dever. Both of them knock the lead roles of Booksmart out of the ballpark and beyond the stadium parking lot! From the moment Booksmart begins, Feldstein and Dever have got their own individual character personalities down pat, you can totally buy who they are as people right away and why one final night of partying holds so much appeal to them. They also manage to share instant riveting chemistry with one another that immediately sells the duo's long-term friendship.

Plus, like any good comedic duo, they're also just utterly hysterical to watch. Feldstein's portrayal of Molly's assured confidence informs some of the best comedic line deliveries of the entire movie while Dever is adept at humorously capturing her characters awkwardness without slipping into mocking her character (Booksmart always maintains a lovely affection for all of its lead characters rather than mocking them). Dever's dramatic acting chops that served her so well in Short Term 12 ensures that not only does she bring a layer of distinctiveness to her portrayal of a socially inexperienced teenager but she also makes scenes of Amy engaging in karaoke or swimming at a big High School house party so gosh darn poignant.

Meanwhile, the standout in an astonishingly hilarious supporting cast has to be Billie Lourd in a gung-ho performance as Gigi. Lourd's dialogue deliveries and body language constantly command a level of frantic energy that screams coked-up 1980's executive and it's a marvel to watch. I now demand Billie Lourd be in all the comedies because I'll be cracking up thinking of her funniest moments in Booksmart for ages to come. Of course, Lourd's not the only part of Booksmart that'll be on my mind in the future. Beanie Feldstein and Kaitlyn Dever's magnificent lead performances, the unexpectedly but more than welcome heartfelt nature of the movie, Olivia Wilde's terrific directing, a comedic Lyft drive sequence that only gets more hysterically awkward as it goes along, Booksmart just delivers everything you could want out of a delightful comedy and then some!
Posted by Douglas Laman (NerdInTheBasement) at 10:50 AM