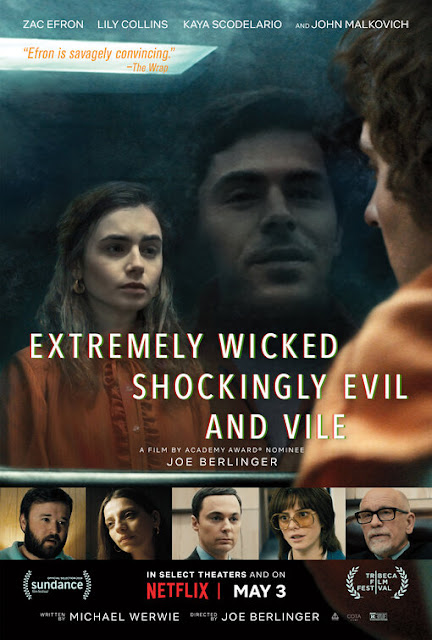 Nobody would have ever suspected Ted Bundy (Zac Efron) of being anything but just a handsome fella with a Volkswagon bug. Why would they? On the outside, he seems like a perfectly pleasant person who leads a serene life with girlfriend Liz Kendall (Lily Collins) and her daughter Molly. But then everything changes once Ted is arrested on charges of kidnapping and murder. Ted maintains his innocence in the face of so many accusations and tries his mightiest to evade police custody in escape attempts that eventually lead him to be arrested on further charges of grisly murders. On the surface, Bundy would never have been anyone's idea of a serial killer but it turns out he's been committing crimes fitting of the title of Extremely Wicked, Shockingly Evil and Vile.


Though the crimes of Ted Bundy are pretty much well-known on a worldwide basis in the modern era, Extremely Wicked, Shockingly Evil and Vile makes the bold decision to make it ambiguous for much of its runtime whether or not Bundy actually committed these crimes. We never see him engage in any violent behavior while screentime is dedicated to him proclaiming his innocence. Taking an ambiguous approach to whether a criminal actually committed foul crimes isn't an inherently flawed approach as the People v. O.J. Simpson season of American Crime Story can attest. However, that particular season of television took that particular ambiguous approach in order to heighten the focus on the perspectives of the varying non-O.J. characters. The point of this season wasn't to show O.J. Simpson committing a vicious crime but rather exploring real-world issues like systemic racism and courtroom debacles that informed people's perspective on this particular crime.

Ambiguity made The People v. O.J. Simpson more interesting on a character and thematic level. For Extremely Wicked, Shockingly Evil and Vile, ambiguity mostly just saps the proceedings of any tension. .Much of the film is filtered through Bundy's perspective and sequences spent with him constantly maintaining his innocence or trying to evade the police just aren't that interesting for a multitude of reasons. Chief among those reasons is that the viewer knows Bundy is lying about being an innocent man, why should we be invested in him slipping away from police custody or his courtroom antics? Michael Werwie's screenplay doesn't even bother to give Bundy any kind of distinct personality that could help maintain audience interest in spite of the flawed ambiguous approach to Bundy's crimes.

This is especially notable in an inept climactic scene where Bundy finally admits to Liz that he is indeed a serial killer. It's supposed to be a shocking gut-punch of a scene, but despite both Efron and Collins turning in solid performances in the sequence (not to mention editor Josh Schaeffer doing a fine job cutting between this conversation and a flashback of Bundy committing a grisly crime), it lands with all the surprise of an older relative plucking a quarter of your ear. It's easy to see this sequence actually having some power if the preceding film had been filtered through another character's perspective, but as executed in the final cut of Extremely Wicked, Shockingly Evil and Vile, it just feels like the movie has gone 'round and 'round in circles only to finish off its story on a moment of obviousness masquerading as a big reveal sequence.

Such an ending is still better written than the primary subplot detailing how Liz is handling Ted being accused of so many gruesome crimes. Poor Lily Collins is trapped in a storyline that sees her character just watching the TV and going through the motions in a derivative depiction of grappling with alcoholism. Liz is occasionally accompanied by a female friend played by Angela Sarafyan who is around exclusively to provide clunky exposition to the viewer on what kind of turmoil Liz is going through. I'm surprised she never just turned to the camera and explained things considering how unsubtle her dialogue is. The screenplay for Extremely Wicked, Shockingly Evil and Vile deals with the perspective of Liz like one might take out the trash, with bare-minimum effort. What a shame since this character has the most conceptually interesting side of this story. What is it like to realize the person you love is capable of being a vicious monster?

The best parts of the performance of Lily Collins suggests she could have totally handled a more insightful take on Liz. Alas, she's relegated to the sidelines while Zac Efron's Bundy occupies much of the runtime. Zac Efron as Ted Bundy is some bold casting that actually feels like it could totally work given how Efron's best comedic work in films like Neighbors or The Disaster Artist relies on a demented edge. Unfortunately, Efron's lead performance doesn't live up to the potential of Link from Hairspray playing a serial killer. Instead, Efron too often comes across as forgettable more than anything else, there's not much in his line deliveries or on-screen persona to differentiate his version of Bundy with his past forays into dramatic acting. Such unorthodox casting shouldn't result in a lead performance this derivative.

To be fair to Efron, though, much of the issues related to his performance seem to be problems stemming from both Michael Werwie's writing and Joe Berlinger's direction, both of which fail to create a distinct personality for Efron's Bundy to inhabit. The lack of creativity from Werwie and Berlinger is found throughout this entire production, including in the unimaginative 1970's music needle drops that help ensure that we get a laughably obvious moment where Bundy evades police custody while a period-era song on the soundtrack croons "...and I'm coming home".  Aside from some parts of the two lead performances and the fact that it's cool to see Haley Joel Osment in a relatively high-profile drama in 2019, the thoroughly disposable Extremely Wicked, Shockingly Evil and Vile wastes so much potential that it should be a crime.
Posted by Douglas Laman (NerdInTheBasement) at 11:42 AM