In Laman's Terms: Why Are Video Game Movies So Cursed? 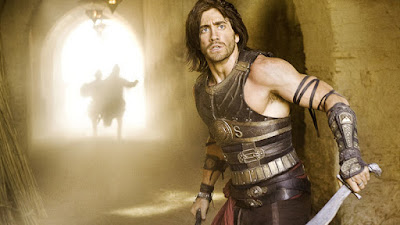 /
In Laman's Terms is a weekly editorial column where Douglas Laman rambles on about certain topics or ideas that have been on his mind lately. Sometimes he's got serious subjects to discuss, other times he's just got some silly stuff to shoot the breeze about. Either way, you know he's gonna talk about something In Laman's Terms!

Today, I shall deliver a hot take so fantastically scalding hot that it shall stir up eons of controversial social media discourse. Hold onto your seats folks for this cutting-edge hot take: most video game movies have been bad. Limiting ourselves to live-action American film adaptations of video games, this subgenre really has been the pits ever since it kicked off with twenty-six years ago with Super Mario Bros., the rare piece of Mario-branded pop culture to be an out-and-out flop. Since then, the amount of notably video game movies has stacked up like pancakes on a Monday morning at Ihop. Lara Croft: Tomb Raider, Prince of Persia: The Sands of Time, Assassin's Creed, anything Uwe Boll directed, the mind reels at how many bad pieces of cinema have emerged from the video game movie subgenre.


The newest entry in this subgenre arrives this Friday in the form of Pokemon: Detective Pikachu. Aside from having some of their characters appear in cameos in Pixels, it's the first time Nintendo video game characters have appeared in a live-action theatrical film since Super Mario Bros. Anytime a new video game movie arrives into theaters, it leads me to ponder something people on the internet have been contemplating for decades now; why exactly is the video game movie subgenre specifically so cursed? Is there some sort of universal reason for why video game movies always coming up short?

Well, sort of, though it's not a reason limited exclusively to video game movies. The kind of story issues, shoddy filmmaking or pacing problems that have hindered the worst video game movies have been found in plenty of other bad movies not adapted from material that originated on a Super Nintendo Entertainment System. It's less that video game movies inherently suffer from a singular flaw and more that (as gross of an oversimplification as it may be) most of them have just had the bad luck of the draw to be produced poorly. Think of it as a problem with a certain line of automobiles being an issue with the actions of the manufacturer rather than something being irreversibly wrong with the automobiles themselves.

Video games have only recently been taken seriously as an artform in the mainstream but movie studios still seem to struggle with realizing the potential for storytelling in films adapted from video games like they do with, say films adapted from comic books. Video game movies are usually just branding exercises or fodder for shoddy B-movies rather than opportunities to do something really exciting with cinematic tools of storytellings. In a February 2017 interview with SlashFilm, Kong: Skull Island director talked about the dissonance between the attitudes of the old guard and newer filmmakers when it came to video games by noting "I think that like you’ve got guys like [Dan] Trachtenberg and a handful of people like me now who are growing up having our brains rewired by Zelda and Metroid, ’cause there’s a logic to videogames.  Right?  There’s a language to them.  And I don’t think that there’s been a wave of directors who have come up who are filmmakers who were rewired like that."

Perhaps this means future video game movie adaptations (which will include a Minecraft movie and Vogt-Roberts own Metal Gear Solid feature) will be enhanced in quality by people with a greater appreciation for their source material. Of course, I'd also say an issue that's plagued video game movies predominately is how derivative so many of them have been, there's been a strange lack of a distinct identity in so many video game movies of the past. Need for Speed was a boring retread of Fast & Furious, Prince of Persia: The Sands of Time was Disney trying (and failing) to replicate the success of Pirates of the Carribean and that Sonic the Hedgehog trailer didn't just drum up comparisons to Hop because they both starred James Marsden.
Taking cues from past movies isn't at all a bad thing, but you have to process those influences through a distinctive lens. Shazam!, for instance, is influenced from tons of 1980's fare, most notably Big, but it takes all those influences and makes them into something that's very much its own creation. In the world of video game movies, Rampage managed to become my favorite video game movie ever because it took all of its influences (primarily classic kaiju movies) and merged them together into a one-of-a-kind delightfully goofy romp. Jeffrey Dean Morgan's Southern with a capital S supporting character in Rampage couldn't be found in any other movie, something that can't be said for the primarily forgettable individuals that populate the majority of other video game movies.

I haven't seen Pokemon: Detective Pikachu yet so I can't tell you how the film itself is but its marketing has been so widely praised because of how unique it is, it certainly stands out from the other blockbusters of summer 2019 and its even more memorable when compared to the forgettable marketing campaigns of past video game movies. We shall see if such a distinct tone carries over into the actual Detective Pikachu movie and future video game movies since that single element could at least make future video game movies, if not good, then at least more memorable than a forgettable mess like Assassin's Creed. Whether the future of this subgenre consists of cinematic classics or more subpar disasters, one thing can be said for certain about any video game movie: "this ain't no game!"

Posted by Douglas Laman (NerdInTheBasement) at 9:41 AM