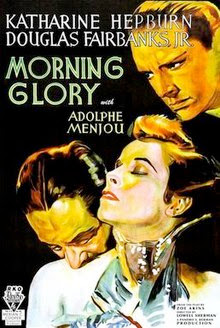 Morning Glory is a film that covers a mighty familiar storyline. It’s a yarn about a girl from a small town who comes to New York City to fulfill her dreams of stardom, which was a well-worn cinematic narrative even in 1933 (its initial year of release). However, an extra layer of meta-importance is injected into the feature by way of it being an early star vehicle for Katharine Hepburn, who would receive her first Oscar nomination for Morning Glory. We’re not just watching a fictional character ascending to stardom in Morning Glory, we’re also watching Hepburn do the exact same thing.


Within the context of this story, that fictional character would be Eva Lovelace (Katharine Hepburn), an aspiring actor who has come to New York City in the hopes of achieving all of her dreams. In order to make those dreams a reality, she strikes up a relationship with New York theater heavyweights like Joseph Sheridan (Douglas Fairbanks Jr.) and Louis Easton (Adolphe Menjou), the latter of whom she’s particularly insistent on impressing her. The odds are all stacked against her, but Lovelace is willing to do anything, including performing Shakespeare monologues in the middle of a fancy part, to get her closer to her dreams.

Thank God Hepburn and her riveting charisma are around in Morning Glory because everything else in here is pretty much perfunctory to a tee. Directed by Lowell Sherman and written by Howard J. Green, little in here is outright bad but then again thee isn’t all that much in Morning Glory is exceedingly memorable. Both the A Star Is Born-esque narrative and the love triangle subplot (fixated on Eva, Joseph and Louis) are executed with little in the way of creativity while a more pressing issue with these storylines is how generic most of the characters are. Hepburn has an older mentor character, for example, that could provide a chance for simply some fun scenes focused on their chemistry. Instead, the mentor figure has about as much impact on Hepburn as Killowag had in his brief mentorship of Hal Jordan in 2011’s Green Lantern.

The two potential love interests are also disposable figures whose actors don’t bring enough distinct personality to these particular roles. Considering the only other major figure in the story is a forgettable antagonist in the form of a more experienced snooty performer, that means much of the production rests on Hepburn’s shoulders. In her lead performance, Hepburn got all the effortless confidence and gift for sublime comedic line deliveries that would make her a screwball comedy legend in the late 1930’s. Though the character works better as a showcase for Hepburn’s talents as a performer rather than as an interesting stand-alone character, at least being that type of showcase allows the character to leave some kind of impression.

Unfortunately, the direction and cinematography in Morning Glory are more in line with the level of quality seen in its non-Katharine Hepburn performances in that its usually serviceable but not all that memorable. Perhaps the worst trait of Morning Glory on a visual level is how it relies too heavily on prolonged single takes. As executed here, such shots tend to make the pacing in individual scenes feel rather sluggish. That’s a word that one would usually never associate with 1930’s movies starring Katharine Hepburn but Morning Glory certainly isn’t up to the standard of Bringing Up Baby. Instead, it’s a great demonstration for what a talented and compelling performer Hepburn would become trapped inside a disposable execution of a familiar storyline.
Posted by Douglas Laman (NerdInTheBasement) at 2:42 PM