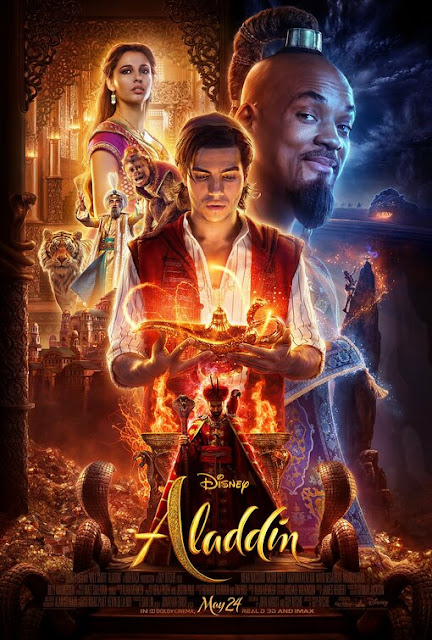 If you've seen Disney's original Aladdin movie, you've basically seen the new live-action Aladdin feature from director Guy Ritchie, albeit with more inspired animation and exciting musical sequences. To be fair to this new Aladdin movie, it is probably one of the least offensive entries in this series of live-action remakes of animated Disney movies as it lacks the distracting editing of Beauty and the Beast or the repugnant visual sensibilities of Alice in Wonderland. It's inoffensive, sporadically entertaining but even entirely disregarding comparisons to the original Disney film, it's still a strangely empty exercise despite being a Disney musical directed by the man who brought the world Snatch.


The story of Aladdin concerns a street orphan by the name of Aladdin (Mena Massoud) living in the Middle Eastern city of Agrabah and falling in love with free-spirited Princess Jasmine (Naomi Scott). Their romance is complicated by how the law of the land decrees that Jasmine must marry a Prince, she cannot marry just a commoner. In order to impress her, Aladdin travels with the devious Jafar (Marwan Kenzari) to seek out treasure in the mystical Cave of Wonders where Aladdin discovers a magical lamp home to The Genie (Will Smith). Armed with three wishes from this Genie, Aladdin sets out to win Jasmine's affections all while Jafar plots a scheme to take full control of Agrabah.

Aladdin goes about the plot of the original Aladdin to a tee with only a few digressions that could have been a chance to give this take on the Aladdin tale its own personality. Instead, most of the new elements end up feeling cribbed from other movies. These include giving Jasmine a new forgettable musical number entitled Speechless that feels like a mixture of Let It Go and This Is Us (like the latter song, Speechless was penned by songwriting duo Pasek & Paul), a similarly generic chase scene involving a gigantic form of Iago the parrot (here played by Alan Tudyk) and reconstituting Jafar so that he, like many Marvel Cinematic Universe foes, is now an evil version of the lead character.

Better in the realm of new ideas in Aladdin is the presence of a new comic relief sidekick to Jasmine played in a highly amusing fashion by Nasim Pedrad as well as Will Smith's take on Genie. As someone who was immensely dubious of this casting when it was first introduced, I'm happy to say I was very much wrong because Will Smith is a delight in his take on this mystical character. Smith's irresistible charisma that made him a movie star in the first place is very much intact as he has solid chemistry with everyone on-screen and many of his comedic line deliveries end up being some of the most memorable parts of the entire production. Whereas much of the new yet derivative facets of this Aladdin remake just feel tired, Smith's performance (with the exception of the musical numbers, which we'll talk about shortly) is full of vibrant gung-ho life and the same can be said for the production design and costumes.

Making pretty-looking sets that rely heavily on visually pleasing bright colors will go a long way with me and Aladdin makes good use of beautifully-realized sets bursting with gorgeous colors and the gorgeous costumes are similarly exceptional. The only real downside to these practically realized visual elements is that, much like how CGI Tarkin stood out in the practical-VFX world of Rogue One, they end up making the poorly-executed CGI characters in Aladdin all the more noticeable. Many of these characters struggle mostly on a design level, with Will Smith's CGI Blue Genie never looking quite right, the actor's face never looks like it belongs on that CGI body. Surprisingly, more egregious is Abu, who is rendered here as a very realistic-looking capuchin monkey whose design hinders any attempts to make him express personality or comedy, leaving Aladdin with a forgettable primate sidekick.

Poor Mena Massoud is saddled with interacting with that poorly done version of Abu for much of the movie, a task so difficult that the fact that he does it without snapping should alone earn him praise. Luckily, Massoud's performance is solid even beyond his ability to interact with a CGI monkey. Massoud communicates an endearing roguish charm perfectly fitting for the Aladdin character and he's got a good singing voice to boot. In the other leading role of the film, Naomi Scott really impresses as Jasmine. I appreciate how her performance really feels like a wholly new creation, instead of trying to do an impression of Jasmine from the original cartoon, Scott creates a whole new engaging personality relying heavily on determination and an amusing wit that see her making this role wholly her own.

Like Massoud, Scott also has a stellar singing voice, though they're both used in musical numbers that are strangely lacking in energy or style. There are only three shots in all of Aladdin that feel like they're directed or edited in the traditionally energetic style of a Guy Ritchie movie (you could have told me this film was directed by Bill Condon and I'd believe you, it feels nothing like a Guy Ritchie feature) and none of them are found in the unimaginatively filmed musical numbers. This is the part of the movie where Will Smith's otherwise strong performance stumbles the most, which is a crying shame since Smith is a great rap artist, he could totally deliver his songs with flair to spare. Sadly, his vocals are ill-suited for the movies versions of Prince Ali and Friend Like Me and it's a frustrating experience watching Smith's talents wasted like this.

At least Massoud and Scott's vocals are a better fit to a new rendition of A Whole New World, though that whole musical number is lit so dimly you'll be hard-pressed to know what's going on on-screen. On a more positive note regarding the music, I did like how Alan Menken's score incorporates the songs, most notably A Whole New World, as orchestral leitmotif's throughout the production. That's a good example of the numerous kind of nice touches scattered throughout Aladdin, a movie whose various moving parts seemed to be engaged in a game of tug-of-war. The sets & costumes keep clashing with the CGI characters, Will Smith's performance keeps getting undercut by how the music doesn't make use of his musical talents, and the scripts fresh ideas are weighed down by their derivative nature. Enough of this film works to make it an inoffensive family movie but not enough of Aladdin works to actually make it a magical film in its own right. This diamond in the rough is more rough than diamond, basically.
Posted by Douglas Laman (NerdInTheBasement) at 11:08 AM