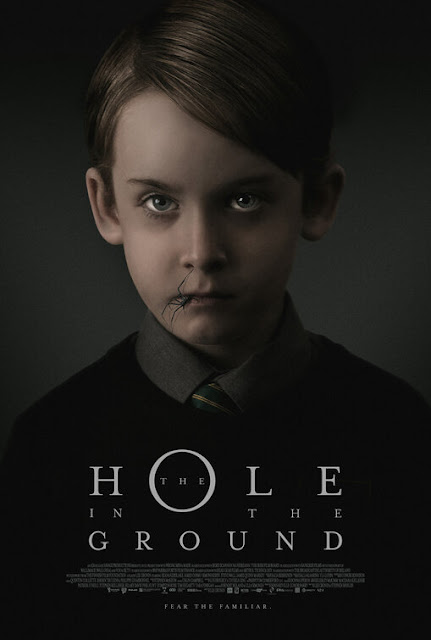 Sarah (Seana Kerslake) and her young son Chris (James Quinn Markey), like so many horror movie protagonists before them, have decided they need a break from city life and move out into the countryside. Some more down-home living will do them both good Sarah figures. They've barely unpacked their bags before some strange events begin to occur in their new home. First, while looking for her son in the nearby woods, Sarah stumbles onto a gigantic hole in the ground. Then, after she finds Chris near that aforementioned hole in the ground, her son begins to exhibit strange pieces of behavior that are the total opposite of his normal personality. An old woman in her neighborhood once claimed that her son was replaced with an evil doppelganger and was dismissed as a loon. Could she have been onto something? Could that same scenario have befallen Sarah and Chris?


This Irish horror film, directed by Lee Cronin, is the newest in a long line of horror movies centered on disturbed little kids, a trend that's gotten quite a bit of use in 2019 between The Hole in the Ground, The Prodigy or this weekends BrightBurn. Lee Cronin's take on this material attempts to stand out by filtering the story through a recurring lens of ambiguity tied into Sarah's mental health issues. Sarah's taking some sort of medication tied to her own anxiety and she wonders throughout the movie if her perception of Chris as being evil is being skewed by her own psychology. Has Chris really been replaced by an evil double or is this really a product of Sarah's mind?

Taking the story in this direction is a creative decision, no two ways about it, and other parts of the story tied into the more intimate parts of Sarah's life are similarly successful. Early scenes showing the realistically complex dynamic between Sarah and Chris are particularly well-executed. Like any child during a big move, Chris is struggling to adjust to a new home and that means him and Sarah are on strained terms that see them going from being best buddies to getting into arguments at the drop of a hat. The interactions between these two characters feel evocative of actual parent/child interactions during a particularly stressful period of life.

But perhaps the best aspect of Lee Cronin and Stephen Shields' screenplay is how it makes a clever twist on what defines an evil horror movie child. Chris is shown to be acting out and sullen in the initial sequences of The Hole in the Ground, so the way Sarah knows something is up with her kid is when he starts socializing heavily with other kids his age or by being ultra-polite to his mother. It's a subtly played but cleverly done subversion of expectations given that the default way horror movies usually signify that a child is evil is by through grotesque or violent behavior. Here, Sarah's alarm bells get triggered by how her son is now acting like a little angel. As the realistically messy opening scenes show, that's certainly not her boy...but is it an indication that he's been replaced by an evil twin?

That is where the ambiguity rears its head again and The Hole in the Ground gets some of its best moments in creating chills in this manner. Unfortunately, the home stretch of the story ends up taking a more concrete approach as to whether or not Chris is who he says he is and this is where The Hole in the Ground takes a dip in quality. Being flat-out open with the fact that Sarah has an evil Chris look-alike in her midst isn't as scary as taking a more ambiguous approach to the same topic. The more low-budget nature of the proceedings also gets unfortunately reinforced in this section of the story, including in a shot meant to demonstrate the strength of this version of Chris that ends up eliciting unintentional laughter rather than terror.

Following that shot comes a ho-hum climax where Sarah must save Chris from a band of underground beings that look like more real versions of The Pale Man from Pan's Labyrinth. Kudos to the script for knowing that it's better that such creatures carry an air of mystery to them rather than devote screentime to explaining what they specifically are or their motivations but it still comes off as an underwhelming crescendo to the story. This final portion of The Hole in the Ground is especially disappointing since little of it ties directly into Sarah's personal troubles that previously informed the features ambiguity. The best character-centric parts of The Hole in the Ground end up just fizzling out in the grand scheme of things but those best parts do help make this a better than average entry in the long-running evil kid horror movie subgenre.
Posted by Douglas Laman (NerdInTheBasement) at 11:07 AM